Report Slavenka Drakulić on the Eastern exodus
Zagreb station. Photo from the series Accession, the great illusion, by Eloisa d’Orsi for Presseurop/VoxEurop. 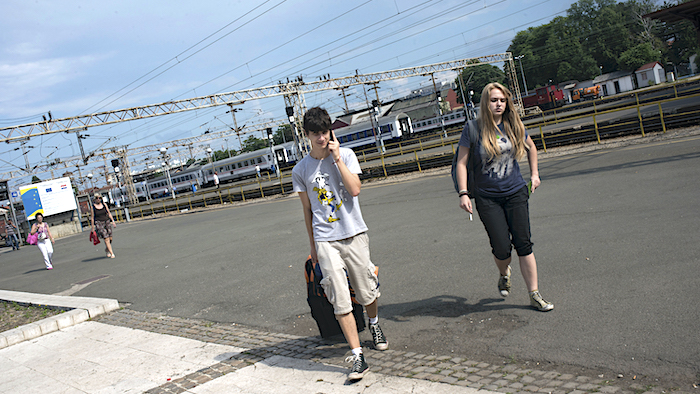 There is no dodging the demographic crisis

In parts of Europe, emigration poses a much bigger challenge than immigration. A few decades from now, writes Slavenka Drakulić, Croatia will be a country of old people with nobody left to take care of them. And instead of real solutions, politicians offer nothing but empty promises and patriotic slogans.

Back in December, many were mystified when a Croatian member of the European Parliament became the European Commission's new Vice President for Democracy and Demography. Croatians were especially surprised. Dubravka Šuica, a former mayor of Dubrovnik, has never been known for contributions to either democracy or demography.

Šuica's appointment seems all the more absurd considering that Croatia is one of the EU member states hardest hit by the recent demographic crisis plaguing Central and Southeast Europe. If Šuica has been entrusted with this agenda at the European level, surely her appointment is based on relevant accomplishments in Croatia? Sadly not. She might as well never have heard of all the young people leaving for Ireland and Germany, the empty villages in Slavonia, where a house doesn't cost any more than a used car, or the empty schools across the country, with 40 school classes disappearing in 2019 alone. But surely she must have been familiar with the official and unofficial statistics – the birth rate of 1.4 children per woman, and the 200,000 people who have left the country in the last decade?

Perhaps she intends solving this crisis now by placing it at the top of the agenda while Croatia helms the EU during the first six months of 2020? Alas, there is absolutely no sign of such intention.

In a
recent article, journalist and Balkan expert Tim Judah draws attention to some disturbing demographic projections. Judah predicts that by 2050, with 22 percent fewer inhabitants, Croatia will be a poor country inhabited by old people with nobody to support them. It’s hardly a consolation, but Croatia is not alone. Today, over 20 million EU inhabitants (about 4 percent) live in a member state other than their country of origin, and that percentage continues to grow. Over the next few decades Bulgaria will lose about 39 percent of its population, followed by Romania with 30 percent and Poland with 15 percent. As for non-EU countries in the region, both Serbia and Bosnia and Herzegovina will lose about one third of their population, and Albania 18 percent.

Depopulation is far from a new phenomenon in this region: from mass emigration to the US in the early nineteenth century, to the gastarbeiter (guest-workers) who left Yugoslavia in their hundreds of thousands for Germany and other Western European countries in the late 1960s and 70s, thereby saving the Yugoslav economy. While many never returned, the balance was maintained by a high birth rate. That situation has now changed, and with the wars in former Yugoslavia in the 1990s, Croatia lost more than 300,000 people, either as casualties, refugees or emigrants. Finally, the latest wave of migration to the West has brought the population below four million.

However, the new wave of intra-European migration is different. For the first time in history, this region of Europe is experiencing a genuine brain drain. In earlier times, those who left were unskilled labourers, whereas now they are the most highly qualified: from the infamous "Polish plumbers", who scared France a few years ago, to electricians, technicians and various IT experts. An unprecedented 32 percent of these “mobile EU citizens” (as they happen to be called) have university degrees. Meanwhile, Bulgarians and Romanians are facing severe shortages of specialized physicians and nurses. The problem is so great that a former Romanian minister actually suggested legislating against emigration lasting longer than five years.

While the West at least partially compensates for labour shortages with immigration, and Poland for example receives many workers from Ukraine, smaller countries in the East face a problem. Here, ethno-nationalism prevails, and the fear of a vanishing nation is strong. Those for whom 1989 also marked the formation of an ethnically homogenous state don’t welcome the idea of immigration from outside of Europe. Instead, restricting emigration is given serious consideration. The aforementioned Romanian minister is not alone – about half of the Hungarians and Poles share his wish, as Stephen Holmes and Ivan Krastev note in their recent book, The Light that Failed.

So far, national strategies are failing because nationalist governments supported by both the Catholic and the Orthodox Church keep appealing to patriotism instead of securing the basic needs that would keep young and educated people and their families at home – such as jobs and housing loans. It’s not hard to understand: people would stay if they could see a future for themselves and their children. But this is the last thing that governments seem set on delivering. Instead, their lies and empty promises aggravate a deep mistrust of the political elite – which in turn becomes yet another reason to emigrate.

In the face of falling birth rates, reforms such as those in Finland, where Health and Social Affairs Minister Aino-Kaisa Pekonen earlier this month announced the introduction of seven months equal paid parental leave for each parent, are bound to be effective. However, these are not realistic proposals for Eastern Europe. In Croatia, the government recently formed a new Ministry for Demography, Social Policy and Youth in order to deal with the crisis. However, even if such a ministry could finally establish some meaningful initiatives, sufficient funds for implementation will be sorely lacking.

In this context, the newly appointed Vice President for Democracy and Demography cannot but repeat the empty promises of the past. It will be some time yet before she and the European Commission finally take notice of the demographic revolution underway in the heart of Europe.

This article is published in partnership with Eurozine