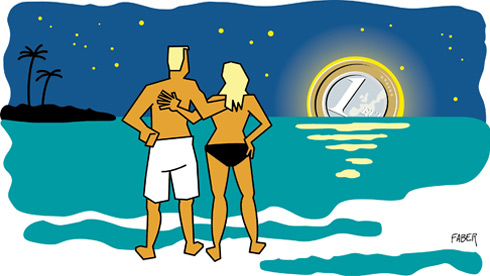 Time to abolish the tax havens

The Cyprus crisis has shone a spotlight on the special tax status of the island in the eurozone. That status, though, is not very different from that of other European countries, like Luxembourg or the Channel Islands: aberrations that should purely and simply be abolished.

Why should we be going under while tax havens, like Britain's Isle of Man and Guernsey, or Luxembourg, remain so comfortably off?

The sense in Cyprus that the island is being victimised is rather dimwitted. If hardly anyone is delving too deeply into these other tax havens, it’s because they’re not asking the other EU states for money to rescue them from bankruptcy. The other reason why attention is focused there is because the goings on in Cyprus were particularly mind-blowing.

Until 2007, the country levied hardly any taxes. In the 1990s, it was the destination for the 800 million dollars that Slobodan Milosevic pilfered from the Yugoslav Treasury. Cypriot banks specialise in managing the proceeds of speculation in oil prices, and the laundering of dirty Russian money, which they send on around the world. According to the CIA, the island is also a destination for Filipino and Dominican women trafficked for sexual exploitation. Its large port, Limassol, is home port to under-regulated, murky and irresponsible shipping companies that fly country’s semi-piratical flag of convenience.

There’s more. The island’s financial elite, as happened with the Irish, maintain incestuous relationships the political right: the Minister of Finance Michalis Sarris, who asked his buddies in Moscow for a towel to bandage the gaping wounds of the banks, was, in 2012, chairman of the board of the worst of the island’s banking disasters, the Laiki Group.

Cyprus not a tax haven for the OECD

However, according to the too lax definition determined by the OECD, Cyprus is not a tax haven. True, its taxes are extremely low, the main requirement for being entered on the blacklist. But it does not entirely meet two other requirements: total opacity and the practical impossibility for third countries to obtain tax information from it.

But other problems disfigure and weaken the country. First and foremost, there is the colossal size of its financial sector, which holds assets 7.1 times greater than the island’s GDP — exactly like Ireland, the other big bank bailout in terms of the size of the local economy. This ratio is twice as big as the eurozone average (3.5) and more than twice the figure for Spain (3.1). Having said that, this it pales in comparison to financially bloated Luxembourg, which has bank assets worth 21.7 times its GDP. In the strict legal sense, therefore, Cyprus is not a tax haven. It’s a state in limbo, and Luxembourg is also in limbo, although both have escaped the OECD grey list.

Let’s talk about Luxembourg for a moment. The world’s richest principality is home to 200 foreign banks, with rather more than €3trn of the €20trn of offshore financial assets at large out there in the world. However, they don’t derive as much benefit as they did from the old '1929 holding company' regime, which offered exemptions from all taxes. Since 2007, SPFs (sociétés de patrimoine familiale ) which do not have to bother with the inconvenience of municipal business taxes, wealth taxes and VAT, have been subject to a subscription tax of 0.25 per cent. Such are the advantages of fiscal limbo.

But one day, perhaps, Luxembourg, and Switzerland, and the island sewers of the City of London (and Singapore) will come down with a bad case of the Cyprian disease, which, in a sense, they are already incubating. To save the German and Spanish taxpayers from having to foot the bill to rescue the holders of uninsured bank accounts when that day comes, there is, however, a solution: destroy the foundations of the fiscal limbo.

How can this be done? Through a powerful fiscal harmonisation, which will bring in additional tax revenues required by the fiscal compact, which is designed to keep spending deficits under control. This fiscal harmonisation will set out a level playing field for taxes on capital, implement minimum standards for personal income tax, get rid of VAT exceptions, and raise corporation tax to do away with the benefits that non-resident companies derive from tax havens, while imposing a progressive Tobin tax on movements of capital.

Such a initiative won’t be a stroll in the park. Tax agreements in the EU require unanimity. The havens and their friends have the power of veto. And they use it. For now. Let’s destroy that too.