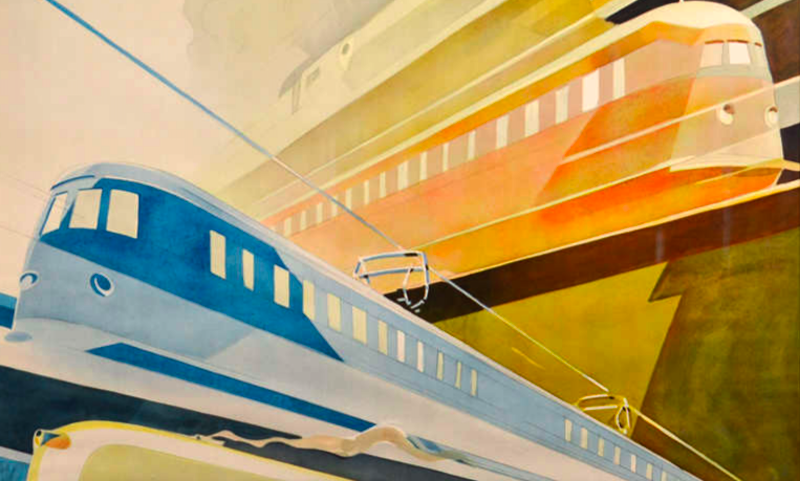 Transport accounts for a quarter of carbon emissions in Europe. There is a quick and easy way to curb them – choose the train for medium and shorthaul journeys. And it does not take longer, says Timothy Garton Ash.

As we approach the start of the COP 26 conference in Glasgow next Sunday, I have been considering what I can do to help combat climate change. Eat less meat? Electric car? Heat pump instead of old gas boiler? Take the train instead of a short-haul flight?

All of the above, to be sure. But as someone who has spent much of his life flying around Europe, the last seems especially pertinent. Roughly half of all flights in Europe are short-haul, defined by the EU as journeys of less than 1500 km. A detailed study by ETH Zürich university showed that short-haul flights on selected European routes from Zurich caused between three and nineteen times the CO2 emissions of the equivalent train journey. (Nineteen is Zurich-Milan: the shorter the route, the bigger the excess.) Britain's Campaign for Better Transport recently staged a 'race' from central London to Glasgow city centre. The train passenger arrived just two minutes later than the person who came by plane, and the CO2 emissions were an estimated 20kg, compared with 137kg for the flight. But, this being Britain, the train ticket cost twice as much.

That is not true everywhere. For example, in December I have to get from Bremen, where I am speaking on a Thursday evening, to Bavaria, where I speak on the Friday evening. Until recently, I would just automatically have booked a flight. Now I find that there is an excellent inter-city train connection which gets me from Bremen to Munich in five and a half hours. Yes, it takes a little longer than the flight, which would be just one and a quarter hours – and Lufthansa offers no less than five direct flights that day. But that does not take account of the car journey out to the airport, check-in and waiting time, and then the long drive in from Munich's faraway airport. Unlike for London-Glasgow, the train is also cheaper: just €27.99 at the supersaver price.

On top of that, the train journey will almost certainly be more enjoyable. None of those traffic jams on the way to the airport. No sweaty striptease at airport security, and weary standing around waiting for your flight to be called. No need to cram yourself into a narrow seat, packed like a sardine into a large metal tube filled with pressurised, recycled air. From the train, I will be able to view the gradually changing German landscape pass by my window; to read and write comfortably, with good Wi-Fi (although a patchy mobile signal); to get up, take a stroll and have lunch in the restaurant car. Then I can step out at journey's end, straight into central Munich.

I recently came across some notes I made at a meeting of the parliamentary party of the then youthful German Greens in October 1984. Green MPs, I recorded, would in principle not use domestic flights inside Germany. 'Here we are, protesting against Startbahn West [a new runway at Frankfurt airport],' said one, 'and then we fly from it!' My notes have a tone of mild amusement, especially when someone confesses 'I do take a Bundestag chauffeured car to the pub in the evening!' But now I think to myself: if only the Greens' approach had prevailed 40 years ago. Imagine that we had spent the last four decades prioritising European rail connections over short-haul flights. Today, as the Greens prepare to take their place in a new German government, you can bet your bottom euro that airlines are quietly lobbying away, explaining the cost – also in lost jobs – of too rapidly slashing all those short-haul flights between European cities .

Italy shows both what can be done and the possible cost. In the last two decades, it has built up an impressive network of comfortable, high-speed inter-city trains. You can do Rome to Milan in two hours and 59 minutes. Alitalia, however, is no more. (Yes, I know the story of Alitalia is more complicated – but you get the point.)

In a public opinion poll conducted last year for my research team in Oxford, respondents across the EU 27 and the UK were asked: 'To help combat climate change, would you support a ban on short flights to destinations that could be reached within 12 hours by train?' Almost two thirds of them (65 percent) agreed. One reason for the high level of support may be that relatively few Europeans actually do much intra-European flying: 76% told us they fly within Europe once a year or less. It's the frequent travellers like me who are the problem. On our project website, we have a map showing how far you can get from Berlin, Brussels and Paris in a train journey of up to 12 hours, including transfer time: from Brussels to Barcelona, for example, or from Paris to Berlin. That 12 hour goal may be overambitious. But a radius of, say, six hours time distance, established as a norm by individual travellers and employers, is surely not unrealistic.

To move more rapidly from short-haul plane to train we need change on the demand side (that's us), the supply side and the regulatory framework. The EU is trying to play some role here. I bet you didn't know that 2021 is the European Year of Rail. Brussels recently sent a Connecting Europe Express around the EU, although this rather highlighted some of the problems, since it needed three different trains, one for the main European gauge, one for the Iberian gauge, and one for the Baltic (i.e. post-Soviet) gauge in the Baltic states.

At least as important will be train operators, booking agencies and consumer pressure groups. It is still much easier to book flights across Europe than it is to book train journeys. One of the best places to start is a mildly eccentric website, seat61.com, run by a British train fanatic called Mark Smith. It tells you where to go online to make your reservation for almost any trip across Europe, adding some connoisseur's advice on the actual trains. Two good websites for pan-European train bookings are raileurope.com and thetrainline.com, but both have significant geographical limitations. Too often, you end up having to book on the individual national rail sites, with all the attendant sign-up hassle.

Another good idea is to revive long-distance overnight trains. The night train was once part of the great romance of European travel (brilliantly and amusingly evoked in Stephen Poliakoff's film Caught on a Train). There are few of them left. Bring back the night trains – and make those couchettes more comfortable, while we are about it.

'Let the train take the strain' was a great advertising slogan of the 1980s. 40 years on, the condition of the planet urgently requires us to do it – and, by and large, it should also be a pleasure.

👉 This article on the Guardian.

There are plenty of alternatives to short-haul flights in Europe

On 27 October Greenpeance and OBC Transeuropa published a report in which they call on the European Union to ban short flights on routes where a train journey under six hours was available, in a sign of growing pressure on governments to take bolder steps to avert climate disaster.

If short-haul flights which have a reasonable train alternative were banned, Europe's CO2 emissions would decrease. The report looks at the extent to which train alternatives exist to short-haul flights in Europe. Based on a list of the most popular flight routes, the authors have gathered data on travel time by train on the same routes, both in 2021 and before the outbreak of the Covid-19 pandemic in 2019.