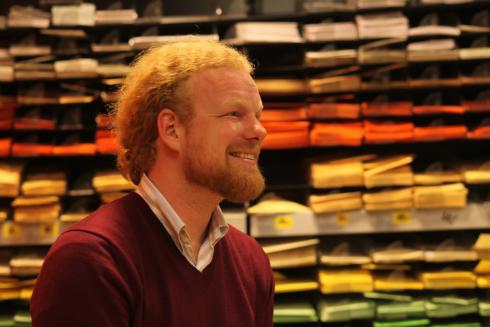 Tomáš Sedláček: “We have fetishised economics”

Considered one of the most talented economists of the moment, Tomáš Sedláček believes that economics should be humanised. His international non-fiction bestseller, Economics of Good and Evil, has recently been published in France. Presseurop met him for an interview.

In Economics of Good and Evil, you argue that the boundaries of economics, which define it as an exact science based on mathematical formulae, should be extended to take into account philosophy, religion and the arts. In what way is this concept new and what does the title refer to?

We have a tendency to separate technical thinking from issues of the soul. Economics takes pride in being as difficult as possible, and I try to show that if you separate the body from the soul, both of them lose their sense. Classic questions we economists ask ourselves are: does the economy work? Is the economy efficient? But we should be asking what is the purpose of the economy.

And so what is it then?

So do we have to reintroduce ethics into the economy?

There has been a lot of talk about the fact that we need to put ethics and humanity into economics. I agree with that, but economics has ethics of its own: you should be efficient, you should be rational, you should not be emotional; it's alright to be selfish and it’s okay for nations to regard their interests. Every system has its own ethics.

I have just read a story about Sodom and Gomorrah. The ethical theme there, was that you must not help anybody. It tells a story about two girls who give bread to a hungry beggar. When other people find out they had acted against the ethics of Sodom and Gomorrah, one is burnt alive and the other hung from the city walls where she is covered in honey to be eaten alive by bees. Nazism had an ethics of its own, communism had an ethics of its own and economics has an ethics on its own. So if we are not happy about the ethics of our time, we should change them.

Is it like some religion that should impose a balance between materiality and spirituality in economics?

Economics on its own became a sort of religion. It tells us what to do, how to think, who we are, how to find meaning in our lives, how to relate to one another, on which principles the society glues together. In a way, it already has religious properties. Take away the mathematics from the economics, and you are left with pure morality.

In Economics of Good and Evil, you claim we have become obsessed by the idea of economic growth. Are you against progress?

I am not against growth or progress. The problem is that we have fetishised it. I am using examples from high and low culture to show that if you fetishise something, it will destroy you. It can be ethics, it can be economics, it can be religion, it can be even your darling. If you fetishise your love, it can drive you nuts. That is what I have called subject-object reversal. You create something that is supposed to listen to you and serve you, then something happens to reverse the subject-object relationship, and you end up listening to it and serving it.

In literature, I found many examples from Golem to Aladdin's Lamp and The Lord of the Ring. At the beginning, and I still believe it, the system - let's call it market democracy - was a fertile ground for growth. In time, it has reversed and it became a condicio sine qua non of market democracy. We should be grateful when growth happens, but if it doesn't, we should be able to survive. The crisis comes only because we think that we will explode as a civilisation without growth. Growth doesn't happen all the time: some years we invent many things, other years we don't invent anything. Some years we have strong GDP growth, some years we have zero or negative GDP growth.

Is there anything positive in today’s crisis?

[Carl] Jung said that nothing can change outside of crisis, least of all human nature. This is not a European crisis, but a crisis of the western world. America, Japan and Europe each try to cope with it their own way. The most important thing is to talk about it. Even people in small villages somewhere up in the mountains talk about Europe now.

We make fun of America, that they are proud of what they have built. In Europe we are not proud of what we have built. The crisis pushed Europe to integrate faster than ever. If 10 years ago, someone had talked about the fiscal compact, it would have been complete blasphemy. Helping each other like we do today is quite unprecedented. So I hope Europe will come out of this better and stronger. In the good old days, half of Europe was missing. I see crises as an opportunity for Europe to move forward.

But what about all the Eurosceptic feelings about Europe and euro?

What do you think of the European austerity policies that have been implemented since the beginning of the crisis?

We can compare it to America, which is still doing the same thing, adding more fiscal energy, more deficits, and printing money. Here in Europe, we are trying to bite the bullet. We know that we have become drug dependent on deficit, and we need to go through a painful detox. If we won't do this, the economy will kill us.

We have to be competitive because of China and other emerging markets. Yes, we are doing austerity in the most inopportune time. In Davos last year, the topic was the great transformation, looking for new models. You never ask yourself who you are until you get into trouble.

How do you explain that some German politicians refuse to pay for the debts of the Greeks or Portuguese and impose austerity?

The debate is whether Greece is a market or a part of the family. If somebody from the family breaks a leg, you run and help them, but if your baker breaks a leg, you go to another one. No hard feelings, you are not interested in the baker, you are interested in buying a bread. In America they don't have a problem with this, they were doing transfers from state to state for hundreds of years, but you don't see it much, because it's a federation. In France you do it as well, stronger regions sending money to a weaker ones. We do the same thing in the Czech Republic. So we have to ask, who is our neighbour, is it only France or is it also Greece?

We know that crises give the opportunity to rethink the economic models. What would you advise to the European leaders to avoid leading their countries into more deficit?

So, politicians in Europe nowadays can't print money. They still have the one hand, so they can print as much debt as they want, and not much can stop them. The pressure from the European Union and the markets is not enough. The markets react too little and too late, and the European target that we have agreed on as a federation, for nations not have deficits of more than a 3 per cent of the GDP, has proven not to be powerful enough to reduce deficits.

So this is why Europe doesn't have a problem with inflation, this is why we are trying to solve everything with only one hand, by printing debt. The debate today is about whether we should free both hands or whether we should also tie the second hand. I believe the role of the government should be a minimal and that governments should also give up their control over the level of deficit produced.

If you look at the state of Europe, what myths or film you would compare it to?

The Lord of the Rings. Elves and Dwarves hate each other, while Hobbits gather around and live together throughout the difficult times. When everything was fine, nobody was interested in Europe. We started to take for granted that we have peace and commerce. The idea of the European Union was to make trade, not war. The Second World War was a result of the fetishisation of the idea of the nation state. We can view the European Union as an answer to that fetishisation. What we have done, and it was an ingenious move, was to exchange the geographical growth of a nation with its economic growth. But we don't think of GDP of Europe: we still think of GDP of France versus that of Germany versus that of Greece. There is no doubt that trading geographical growth for an economical one is positive and a good thing. Now that we have growth in the economies, we can also trade that for growth in other areas, such as culture, social interaction and other important domains.