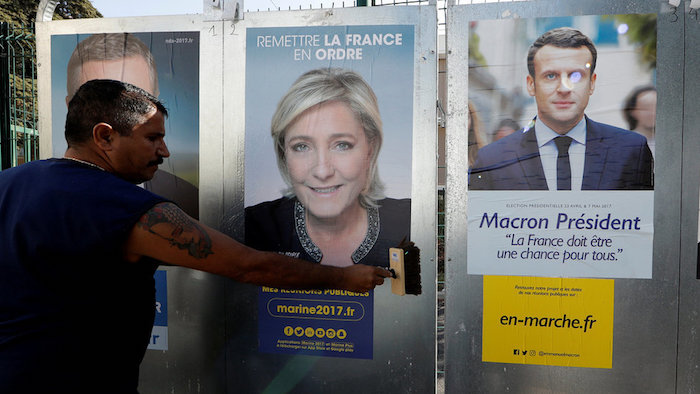 Towards a political revolution?

The rise of Marine Le Pen and Emmanuel Macron in the run-up to the French presidential elections reflects a wider dissatisfaction with the country’s political system. Is France on the verge of a political breakthrough that will the replace the old conservative-Socialist divide by one between nationalists and internationalists?

Few terms of office will have been so fruitless politically as that of the outgoing French president, François Hollande. The Socialist had campaigned presenting himself as the enemy of “the world of finance” and promised to bring down unemployment in the wake of the economic crisis. Five years later, not much is left of all that. In terms of economic policy, we can speak of almost total stagnation under President François Hollande. Perhaps the best word to sum things up is “autopilot.”
The French Socialists have been caught in their contradictions: the heady promises of election season are one thing, being in office facing the difficult realities of France’s rising debt and falling competitiveness is quite another. As the Bertelsmann Stiftung’s Sustainable Governance Indicators (SGI) project points out in its latest report for France: “As his predecessors, President Hollande has not fully and openly embraced the necessary reforms, but rather adopted them reluctantly and furtively while maintaining the illusion of a state capable of controlling the markets and steering the economy.”
As a result, the government wavered between economically damaging socialistic measures and half-hearted liberal reforms. After 4 years in office, Hollande finally managed to pass his so-called loi travail (labor law), which somewhat eases hiring and firing of workers, but whose effects are still unclear. The SGI notes: “The country faces acute structural problems, including a rigid labor market, high unemployment rates, growing debt and a lack of competitiveness.”
In the meantime, France has failed to reduce its deficit below the Eurozone’s official target of 3 percent of GDP. Unemployment remains at almost 10 percent, still higher than when Hollande took office in 2012. There has been a slight return to economic growth, mainly due to policy changes at the European level, rather than in France.
The Eurozone has effectively settled on a new tentative policy consensus between Keynesians and ordoliberals in the wake of the crisis: the European Central Bank is stimulating the economy with hundreds of billions of euros, convincing the markets that European governments will not go bankrupt yet, and the European Commission has taken a softer line on deficit spending (neither stimulus, nor austerity). As Commission President Jean-Claude Juncker has conceded with his trademark humor: France has been given more time to meet her deficit goals “because it’s France.”

In terms of politics in contrast, a great change appears to finally to be on the way, after three decades of Socialists and conservatives taking turns in power. The novelty is not the nationalist candidate, Marine Le Pen. To be sure, the Front National is, after a slow and unsteady rise since the 1980s, reaching unprecedented heights. In 2017, it is almost taken for granted that Le Pen will reach the second round of the presidential elections, whereas her father Jean-Marie’s achievement of the same in 2002 was considered a national trauma. But Marine Le Pen only commands about a quarter of the electorate and her acerbic criticisms are nothing new in French politics.
Rather, the novelty is with the strange and meteoric rise of Emmanuel Macron, a former financial banker and economy minister in the Socialist government (crucially, he himself was not a party member). He is now running as an independent candidate. Macron may well beat the conservative candidate who might otherwise naturally replace Hollande: François Fillon, who has suffered however from corruption scandals. The Socialist candidate Benoît Hamon, who represents a left-wing turn, has proposed exotic measures such as a universal basic income and a tax on robots. He is floundering in the polls and may well be beaten by the far-left Jean-Luc Mélenchon.
Macron has received enthusiastic support from many members of the French establishment, including the right-wing liberal Alain Minc, intellectuals such as Bernard-Henri Lévy and Jacques Attali, newspaper and fashion mogul Pierre Bergé, the left/green gadfly Daniel Cohn-Bendit, and even the former leader of the French Communist Party, Robert Hue. A strange coalition, one might say, but one reflecting many French people’s frustration with the old conservative-Socialist duopoly.
While all the other major candidates have either bashed the EU or pledged to violate the 3% deficit rule, Macron alone is putting forth a strong defence of the European project. He has praised German Chancellor Angela Merkel’s welcoming over a million migrants to Europe. There are hopes that his leadership could allow for a revival of the old Franco-German motor and a setting of the EU back on track.

There are also signs of weakness however. Macron supports the creation of a Eurozone Parliament and budget to lead policymaking in the currency area, but then so did his mentor Hollande. Critics have faulted Macron for vagueness and indeed he has only last month presented a political programme. The latter includes promises of increasing the purchasing power of workers and punishing companies for excessively using fixed-term contracts. Whatever the merits of these measures, they would likely do harm to France’s finances and competitiveness. Furthermore, there will be parliamentary elections after the presidential ones and it is not at all clear who will hold a majority there and whether they would be happy to work with a president Macron.
Despite the shock of the Brexit referendum and of U.S. President Donald Trump’s election, Le Pen’s winning the French elections still seems supremely unlikely. Put simply, most French people are put off by her aggressive rhetoric and her revolutionary programme, which would include secession from the Eurozone, with all the economic uncertainty that would entail. Macron or Fillon seem like the most likely winners.
France’s situation is by no means catastrophic. Her mediocre performance is quite in line with the Eurozone as a whole, rather better than Italy, significantly worse than Germany. Economically, France has lived with doubled digit unemployment and reluctant reform-making for much of the last three decades. Politically, we may be on the verge of a breakthrough that would replace the old conservative-Socialist divide by one between nationalists and internationalists. Then again, as has often been said in French politics: Plus ça change, plus c’est la même chose ! (The more things change, the more they stay the same!)