Report Macedonia
The "Porta Macedonia", which opened in 2012 at Pella Square in Skopje 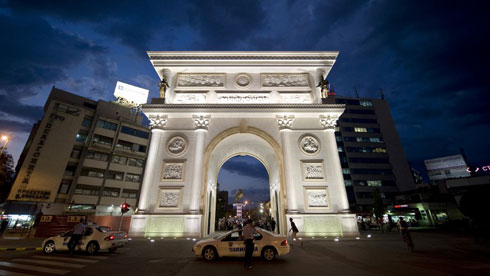 From Alexander the Great to Mother Teresa, the small republic wedged between the Bulgaria and the Greece is loading itself down with debts and statues to confirm its identity.

The "Porta Macedonia", which opened in 2012 at Pella Square in Skopje

How should one assert itself when one is, like Macedonia, a small country with one neighbour, Bulgaria, that contests its national identity and another, Greece, that contests its name. For two years now this small Balkan republic of two million people, forced officially to call itself FYROM (the English acronym for “Former Yugoslav Republic of Macedonia”), has deployed phenomenal energy and methods to prove that it has roots as ancient as those of its two prickly neighbours: it is rewriting its history in bronze and stucco, in dozens of statues that now adorn Skopje, its capital.

All seek to magnify the ancient past of the Macedonians, daring to place Alexander the Great (aka Alexander of Macedon) in the role of ancestor. It’s a vision that Athens, revolted, qualifies simply as “misappropriation” of the most famous conqueror of its own history.

The project to embellish the Macedonian capital, severely damaged by an earthquake in 1963, is the occasion to affirm a new national narrative. Launched under the name “Skopje 2014”, it blends neoclassical and even baroque buildings (a style never used in this rugged part of the Balkan Peninsula), fountains, colonnades, footbridges over the Vardar and Roman galleys on the river banks, all enlivened with a multitude of statues.

The most imposing of them, 23 metres high, which everybody understands to be Alexander, bears the official name of “Warrior on horseback” in order not to offend Athens (and the European Union which, backing Greece, is delaying Macedonian membership). The Warrior on Horseback faces the “Warrior on Foot” – Alexander’s father, Philip II of Macedon.

Thus, on a patch of land barely 100 metres across, in the centre of the capital, the entire history of the region is on show. The statue of the Emperor Justinian reminds us that Macedonia has, after Alexander, known Roman grandeur. A little further away, King Samuel (10th Century) looms over passers-by from a high throne. According to local historians, Samuel is the father of the first state of the Slavs of Macedonia; Bulgaria disputes that.

For Sofia, this king was a Bulgarian ruler who had shifted the centre of his kingdom from Sofia to Ohrid in southern Macedonia... Also dating from this medieval period are saints Cyril and Methodius, to whom the Slavs owe their alphabet, and Saint Clement of Ohrid and St Naum, founders, in Ohrid, of the first Slavic University – another four personalities whose links to FYROM are magnified by Skopje. The Bulgarians and Macedonians (Greek), of course, contest those ties.

[[Curiously, the five centuries of Turkish occupation seem to have left nothing worth being part of the national heritage]]. From the Middle Ages, one passes therefore directly to the 19th Century and the exaltation of the men who fought against the Ottoman Empire. We admire them in bronze and on horseback, military leaders or ideologists like Goce Delchev and Damjan Gruev, founders of the Internal Macedonian Revolutionary Organisation (IMRO).

In homage to these heroes of the national struggle, a museum was built across the Vardar by their heirs, who resurrected the old party in 1990 and who have governed the country since the legislative elections of 2006. Inaugurated in 2011 for the 20th anniversary of the independence of Macedonia, the institution showcases, with many wax statues and tableau in the realist style of the 19th Century, the horrors, suffering and martial feats of the small country.

Passing very discreetly over the terrorist phase of the IMRO between the two world wars and its collaboration with the Nazis, the museum likewise effaces the role of Tito’s Communist Yugoslavia in the affirmation of the nation and the Macedonian language.

This excessive nationalism irritates the Albanian minority, which makes up a quarter of the inhabitants of the country. They have, for sure, got a Skanderbeg square, in homage to the Albanian national hero, and will be entitled to a statue of Mother Teresa, the Albanian nun from Skopje and benefactress of India. But too much is too much. Following the scuffles between young Albanians and Macedonians at the start of 2011, the government had to give up plans to build an ecclesiastical museum, topped with a cross, at the top of Kale, the old Albanian fortress of Skopje. This largely Muslim community is also affronted by the influence that Orthodoxy has regained from this ode to the ancient past.

Orthodox Macedonians themselves do not adhere to the nationalist dream and to the return to ancient wellsprings. “I have no need of Alexander or Philippe to know that I am Macedonian,” fulminates sociologist Vladimir Milcin. “I learned it from my grandmother when I was small. My language is Slavic, my family is Orthodox, and I see nothing that could link Alexander with Orthodoxy.”

Now that the country, hit by the crisis, goes into debt virtually every two months to pay the pensions and salaries of civil servants, residents of Skopje have begun to question the cost of all this “kitsch”. [[“We are told that this has brought tourists, but tourists are also having their pictures taken at Disneyland”]], says the new mayor of the central district of Skopje, Andrej Zernovski, who is worried that his hometown will become “the laughing stock of the whole world.”

Elected in March, Andrej Zernovski built his entire campaign on opposing Skopje 2014 – much to the dismay of the administration, dominated till then by men of the IMRO. “During the first round of the municipal elections, when it seemed that I had every chance of winning, 29 statues were erected, at night, in the streets of Skopje. My predecessors knew that they would not be able to put them up after my election,” said Zernovski. Once installed in his small office at City Hall, his first act was to rid it of all photos of the monuments so dear to the former team, and his first official act was to proclaim a moratorium on the work and to demand a financial audit.

Scenting a scandal in the air, the Minister of Culture rushed to announce that the overall project, which was supposed to cost €80m, had already run up bills of €300m. The statue of Alexander came to €10.4m and the Museum of the National Struggle to slightly more than €13m….

In a country where one in three of its population lives below the poverty line, the Skopje 2014 project, which started as a dream and ended in farce, has every chance of finishing off as simply a settling of scores.