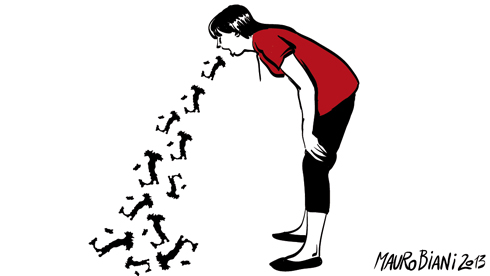 Twilight of the parties

The stalemate over the election of the President of the Republic, which broke on April 20 with the re-election of Giorgio Napolitano and the resignation of the leadership of the Democratic Party, is the highwater mark of the crisis in the Italian political system. To save that system, we must move ahead immediately with reforms, starting with electoral reform.

Our republic is at a crossroads as important as it is serious, as indicated by the crisis of parliamentary democracy. The crisis follows and inevitably reflects the crisis of the parties, and it is revealed by the incapability of those parties to bring unity to conflicting opinions, both in their own midst and towards other parties. In Germany in 1933, the Weimar Republic broke apart on this stumbling block, with tragic consequences.

In the Italy of 2013 we are witnessing a new version of the history of the ungovernability of the parliament and the dysfunctionality of its democratic methods – the agreements, the cross-party compromises, the majority decisions. The crisis, which was already brewing when the parties failed to form a government following the February election, was brought to a head with the election of the President of the Republic.

This is because, when it comes to electing a president, the parties have to manage the political game directly themselves. They cannot procrastinate or fall back on an external authority, as they can when they are putting together a government, which under the Italian Constitution is overseen by the president.

The parties were unable to agree, to compromise and take decisions by majority vote. They failed for various reasons. Some are specific to Italy’s recent history, or the 20 years under Berlusconi governments, which fuelled oligarchical and corrupt practices and darkened the public mood against the political parties. The second is modern means of communication, which have created direct relationships between citizens and leaders and institutions. This phenomenon has given rise to the notion that the role of the parties can be reduced and that we can have a direct parliamentary democracy – that is, without having to go through the parties.

For all these reasons the parties are weak and getting weaker. What we are witnessing is an erosion of legitimacy, and and an erosion of structures and leadership, credibility and authority as well. That erosion has been confirmed by the inability to form a government and it has been magnified by the ill-chosen pact between the Democratic Party (PD) and the People of Freedom (PdL) to field a joint candidate for the presidency of the Republic.

This inept agreement shows just how far those who came up with it and who backed it have failed to grasp the Italy they are living in, that Italy that just came out of the polling booths. They have failed to grasp the crisis of parliamentary democracy and are carrying on as they did before, back when the party machines made the decisions and the parliamentarians toed the party line. Their failure to grasp this crisis has been a very grave error.

Today they’re placing all their hopes once again in Giorgio Napolitano. The re-election of the outgoing president confirms the inability of the parliament to emerge from this cul-de-sac and to cope with democracy without having to invoke a higher presidential authority. The presidential function, in fact, is now going through a metamorphosis. Perhaps we need to rethink our institutions, since, with the democracy of the web, which is here to stay, the fragmentation of the parties is inexorable.

Today, the political game is being played out live, between the parliament and the Internet. Predictably, the result is indiscipline, fits of temper, lack of distrust in commitments that were made, and the inability to sit down together for negotiations. Only parties led by a man with a firm hold on them can demonstrate discipline and unity. Paradoxically, the PdL and the Five Star Movement (M5S) are more disciplined and united than the PD. The latter is, amongst all the political movements, the one whose leaders have the hardest time whipping the members into line and so are the most plagued by instability.

The PD is the mirror of the crisis afflicting parliamentary democracy. How we can cross over through this stage of lack of authority is hard to figure out. That is why it is now more important than ever to grasp the meaning of this critical moment and to act accordingly – that is, to start immediately on electoral reform. This electoral law is the scandal that this parliament has stumbled over and that every future Member of Parliament will stumble over, precisely because it promotes divisions.

Even if an electoral reform is brought in, however, it will be obvious that it will be possible only with the implicit creation of a presidential system. Those who are responsible for our institutions should be aware of the gravity and the exceptional nature of this moment in our history – and be capable of putting together an accurate picture of the extremely delicate situation we are living in.

The collapse of the Democratic Party, the failure of Grillo

According to Linkiesta, the first re-election of a President in the 67 years of the Republic is the “umpteenth misstep of a political class that is now inadequate, unable to carry out the simplest duties delegated to it by the Constitution”. After having failed to cope with the financial emergency in November 2011 and finding itself obliged to hand over the reins to Mario Monti and his government of technocrats,

incapable of reading correctly the calls for renewal coming in from across the country, the Democratic Party and the People of Freedom have reached the edge of collapse – this time because of Beppe Grillo. It is no coincidence that the collapse of the popularity of the political heavy hitters has been accompanied by the incredible ascent of the Five Star Movement, carried aloft by millions of protest votes that transcend traditional divides.

Stefano Folli, writing in Il Sole 24 Ore , does not share this opinion. According to him, “Beppe Grillo has ended up losing a political battle that he had been winning just hours earlier… Grillo had set out a strategic objective, which was to destabilise the Democratic Party first, and then upset the entire party structure”. To this end, he relied on the candidature of the jurist Sefano Rodotà to win over part of the left-leaning electorate. Now, stresses Folli, what Grillo fears is that

the re-election of Giorgio Napolitano may give a vital boost to a system in decay […], that a strong Presidency will be able to bring the parties back to reason, by getting them to finally tackle the reforms they have so far refused.