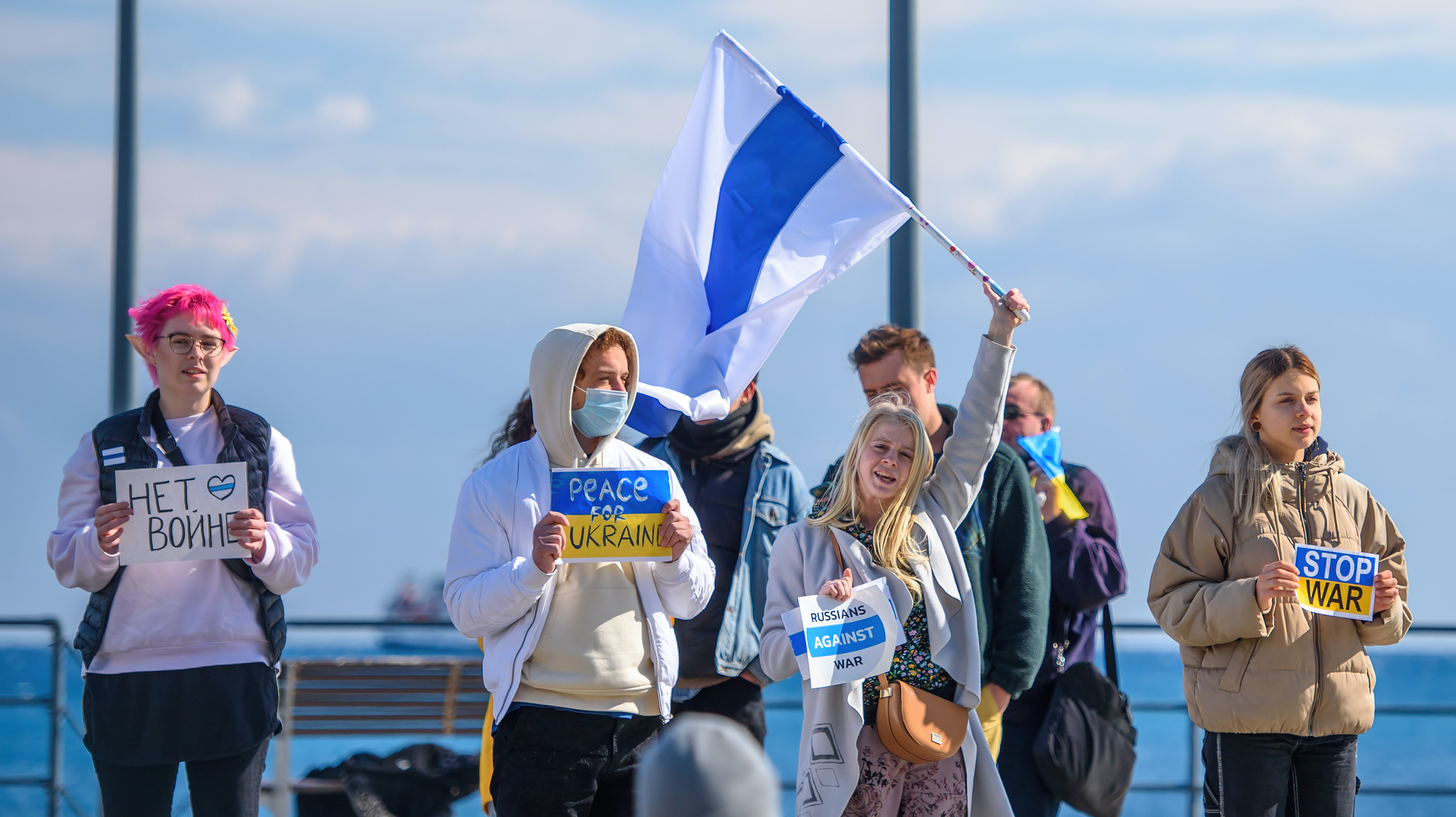 With Vladimir Putin’s increasing authoritarianism in the wake of the war in Ukraine, many Russian political dissidents and conscientious objectors have been forced to leave their country. Some have fled to Cyprus, a long-established safe haven.

The end of spring in Limassol, a seaside resort on the south coast of Cyprus. The sun glints off a restless sea and umbrellas flap in the wind. Dmitry Gudkov, a 42-year-old Russian exile, compulsively checks his mobile phone, hidden behind dark glasses. At his collar, a badge in the blue and white of the Russian anti-war flag. “The red [the third colour in the Russian flag] reminds us of the blood spilt in Ukraine,” he explains between sips of coffee.

Like Gudkov, many other Russians have sought to migrate to Tbilisi, Yerevan, Istanbul or Tel Aviv. Since the invasion of Ukraine by the Russian army on 24 February 2022, more than 8 million Ukrainians have fled their country, according to the latest figures from the United Nations High Commission on Refugees (UNHCR). Of those, 3 million are estimated to have since returned home. But approximately 500,000 Russians – among them journalists, dissidents, activists, executives, and business people – have chosen exile over Vladimir Putin’s Russia. A figure, cited by Gudkov, that the Russian interior minister so far refuses to comment on.

Some exiles made it to Limassol even as international sanctions against Russia were imposed by the United States and the European Union in response to the invasion of Ukraine. More than 10,000 Ukrainians fleeing the war now live among the Russian community present on the island for years. Limassol has long been a destination of choice for wealthy Russian expatriates – the city was even nicknamed “Limassolgrad”, in part due to its reputation as a hub of Russian offshore finance and a tax haven for those wishing to hide their wealth.

In 2020, Cyprus suspended its controversial “Golden Visa” programme, which granted nationality to foreigners in exchange for sizeable local investments. This decision sounded the death knell for the luxury construction sector in Limassol, and building on several properties came to an abrupt halt. Launched in 2007, the Golden Visa programme became particularly attractive after President Nikos Anastasiades came to power in 2013. Ultimately, the Golden Visa programme injected more than 8 billion USD into Cyprus’s failing economy after the 2013 financial crisis.

In the wake of perestroika, the wave of reforms that marked Mikhail Gorbachev’s years in power (1985-1991), the community of 50,000 Russians in Cyprus experienced exponential growth. Today, shop signs with Cyrillic lettering abound, along with Russian newspapers, radio stations, schools and churches.

Gudkov is not an obscure figure in Russia. From 2011 to 2016, he was a member of the opposition in the State Duma, the lower house of the Federal Assembly of Russia, and voted against the annexation of Crimea in 2014. In 2019, his Civic Initiative was prevented from running in the Moscow legislative elections. “It’s a tactic regularly employed by Putin’s regime, because if we had run, we would have won,” asserts Gudkov. After being jailed for two days on a spurious money laundering charge, whose main target was his aunt, Gudkov was forced to flee to Cyprus in 2021 with his family for fear of persecution.

“If they don’t have the grounds to make a criminal charge against you, they come up with one against your family, and you feel responsible for the persecution of your relatives,” explains Alexander Solovyev. Gudkov’s 34-year-old former parliamentary assistant is also exiled in Limassol. “We have no choice but to leave the country. It’s an authoritarian regime rapidly deteriorating into a totalitarian one”, he continues.

Most Russians left because they fear being imprisoned under the martial law that allows the Kremlin to restrict the liberties of its citizens, and to punish “the public dissemination of false information” about the war with 15 years in prison. “In Russia it’s like it was with [the Soviet inasion of] Afghanistan: if you tell the truth about the war in Ukraine you can be sent to prison”, says Gudkov.

“We feel awful for the Ukrainians that are suffering, but a significant part of Russian society is now doubly punished – persecuted for their political stance in Russia and the victims of sanctions"

From Cyprus, Gudkov is an active member of the Russian Anti-War Committee, an initiative launched by political and public figures in exile to help other Russian expatriates and Ukrainian refugees. Georgia and Armenia allow Russians to enter without visas and remain for a year. Turkey also allows entry without a visa, but only permits two months of residence.

In March, in the oppressive atmosphere of the beginning of the war, Daria, a 33-year-old financial analyst, decided to pack her life into two suitcases and catch a plane from Moscow to Cyprus via Istanbul – a journey that ended up taking two weeks. “It was difficult to resist Putin’s dictatorship, so I decided to stop paying tax and to leave. I don’t want to ‘participate’ in this shameful ‘special military operation’ – it won’t be in my name, in any case,” she says.

Everyone is trying to reach the EU. But many middle-class Russians like Daria, who have been lucky enough to exile themselves to an EU country, have watched their savings melt away due to international banking sanctions. While she waits to open a bank account, Daria is paid in cash by the consulting firm where she works. “We feel awful for the Ukrainians that are suffering, but a significant part of Russian society is now doubly punished – persecuted for their political stance in Russia and the victims of sanctions,” says Solovyev. “Many Russians need help to legalise their status in European countries. They deserve assistance and a simplified procedure,” he emphasises.

“It’s hard for me to understand the point of the sanctions – they aren’t going to stop Putin,” says Nikita, 26, who hopes to obtain a residence permit in Cyprus. He and his wife decided to leave Russia just after the war began, and travelled through Kazakhstan to reach the island. “When we crossed the Russian border, we deleted all of our apps and anti-militarist discussions, because they have caused problems for some people at passport control at the airport,” he says.

The young sales manager describes feeling powerless in the face of events. “I want to do everything I can to stop the war, but I don’t know how,” he says, tears in his eyes. The Russians fleeing Putin’s regime have seen their worlds collapse. For them, as long as Putin is in power, returning to Russia is inconceivable.