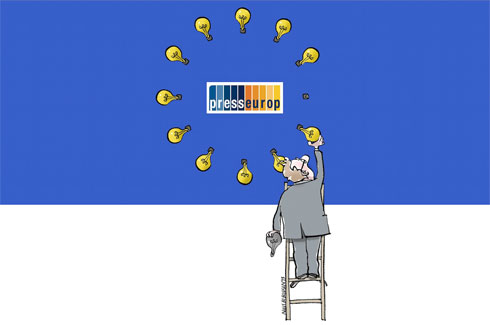 Until we meet again

To translate into 10 languages and bring together the newest and most original writing from the European and world press on Europe. Not the story of European institutions, as that is a tale already thoroughly told, but the Europe of the men and women who live it.

This statement of faith - it was ours - comes from May 26, 2009, the day Presseurop was born. Four and a half years later, "this dream of journalists and citizens" has been fulfilled. Now, however, it must end, owing to lack of funding.

During this time, Europe has changed considerably. In 2009 the question was whether José Manuel Barroso would be re-elected as the head of the European Commission, and whether the Irish would approve the Lisbon Treaty in a second referendum. A few months later the Greek crisis broke open, bringing with it dangers for the Eurozone as a whole. From Ireland to Portugal, from European stabilisation funds to the banking union, from "Merkozy" to the millions of European unemployed seeking a future, Presseurop has adapted to each new EU reality, following the day-to-day lives of Europeans and analysing the issues.

We did this work with a team of journalists, correspondents and translators – more than 100 people over the years, who have earned our warm thanks. They pooled their differences in language, culture and world view. At a time when the EU has been divided between North and South, Eurozone and non-Eurozone, citizens and European elites, Presseurop turned into a living laboratory of what the European public space could amount to.

At a time where many sites are looking to increase their audiences by any and all means, we have cultivated our ties with a more limited audience. We did that, though, in the Latin sense of the term: those who listen. For four and a half years you have tuned into the singular voice of Presseurop, and you have left your own echo among the thousands of comments and signatures put to our #SavePE petition. To this end, it is not a farewell that we are sending you today, but an “Until we meet again”. Until we can find – thanks to you, perhaps? – the means to resume our dialogue as soon as possible.

PS: Why not keep in touch? All our valued readers can join us on a new discussion blog Friends of Presseurop, launched to keep the European debate alive. See you there!