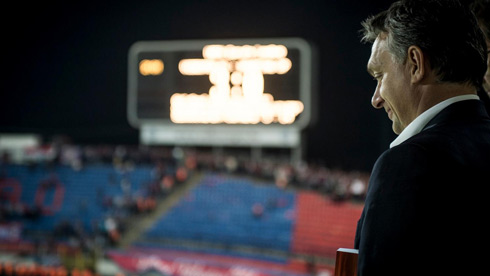 The Hungarian national team’s failure to qualify for the 2014 World Cup is a setback for Prime Minister Viktor Orbán, who sees the sport as a means of asserting his political values and personal power, according to a sociologist close to the opposition.

In the 20th century, after the autocratic regimes of Miklós Horthy and János Kádár had stabilised their power through bloodshed, they focused all of their attention on sustaining a national cause that ensured them a political base. The first centred his action on re-establishing the honour of a nation humiliated by the [1920] Trianon Treaty and in revising the borders it set. The second focused on the battle against poverty and inequality.

Neither Horthy nor Kádár were familiar with the concept of using power for their personal pleasure, the first due to his education and the second because of his natural puritanism and communist ethic. Horthy, the Regent of the Hungarian Monarchy enjoyed hunting. Kádár, the Secretary General of the single party, the Hungarian Democratic Party, liked a game of chess. The leisure activities of these two autocrats had no influence on the way they exercised power, they enjoyed them with no afterthoughts.

Today, there are daily reminders that the Orbán regime is seeking to eliminate competition in every subsection of society. Not only in those areas the government sees as key but also in its EU funding requests, in the arts, in the distribution of tobacconist shops, in farm subsidies, in everything.

It is the same for football. [[The head of this Mafia-like, post-communist state loves the sport so much that he does not tolerate fair competition or fair play]]. Because he is considered by football players, club owners and the remaining fans as the saviour and benefactor of the sport, Viktor Orbán is using the stadiums to experiment his preferred social model.

This corrupt leader and sports fan has transformed the world of Hungarian football into his desired model. The social structure of the stadiums reflects a partial, but authentic picture of the world outside the stadium. Since the summer of 2010, the weekly broadcasts of football games on public television stress the principal characteristics of this structure. The picture is partial because, among the spectators, there is a total lack of “subordinate citizens” (what used to be called citizens or workers). They have no place in the VIP boxes, are disgusted by the Neanderthal fans and no longer attend games, which, in any case, are no longer interesting. It is for this reason that the number of spectators is decreasing despite the national propaganda campaign (the number of spectators fell to 2,700 for the 2012-2013 season from 3,600 spectators the previous year).

Television viewers learn that Hungarian power is concentrated and principally resides in the VIP box, to which only the regime’s privileged are allowed entry. After seeing one of these television broadcasts, there is no mistaking the identity of the most important person in the universe: Viktor Orbán, whose place is as central as that of Christ’s in Leonardo da Vinci’s “The Last Supper”.

The Mafia boss does not find the right-wing roots of radical fans unacceptable. Enthusiasm for war criminals, regularly-occurring racist outbursts, continued calls to hate neighbouring countries and violent acts are not displeasing unless they result in a condemnation (real or possible) by a Hungarian or international federation.

“Football-savvy” Viktor Orbán never gives his opinion on these issues: when FIFA condemned Hungary to play its qualifying game for the 2014 World Cup against Romania in an empty stadium because of recent events caused by fans during a previous game against Israel in Budapest, Orbán reacted tersely: “It is better if I keep my opinion to myself.” If he gives in and wants to show his disapproval, he gets one of his minions to do it. For example, Gábor Kubatov is the director of the [ruling] FIDESZ party, president of the Ferencváros Football Club, was a member of the team’s radical fans in the 1990s and has criminal ties. He disapproved of the installation of a poster of László Csatáry [a Hungarian Nazi war criminal] only because he feared reprisals against the club.

Football is the most subsidised sport in Orbán’s Hungary. Football’s success is a testimonial to the superiority of the National Cooperation System [the alliance of Orbán’s FIDESZ with the KNDP Christian Democrats whose slogan is “work, home, family, health and order] over that of decadent, liberal western democracies.

[[Orbán’s conviction that there is a mystical relationship between the subject of his passion and the Magyars helped him to override the majority opinion]]. For example: “Football is a native sport, we can only play it in a distinctive Hungarian fashion” or “The Hungarian nation is ‘football-savvy,’ it is good for us”, (Magyar Nemzet, September 3, 2010).

According to Viktor Orbán, the genius of the immensely- and multi-talented Magyars can be seen on the football field. He attributes the diminishing of Hungarian football to decades of sabotage by the Communists in power after 1956. Once Hungary is again led by forces worthy of the name and who will support football, the world order – which states that we are the greatest of kings – will obviously be re-established. Although Greater Hungary no longer exists, Hungary will regain its world-power status through football. “We will return among the great nations of football,” Orbán has said. Hungary is a world-class nation, it deserves glory. But achieving that will take at least a Fata Morgana.