Report State of emergency in Hungary 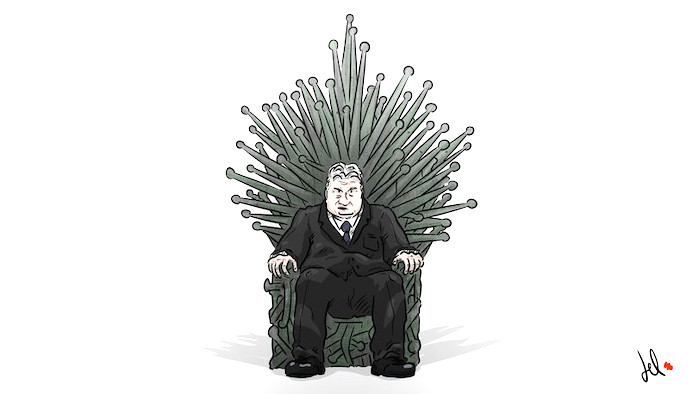 Report State of emergency in Hungary

It is not often that there is reason to agree with the political analysis of the Hungarian right-wing extremist party Jobbik. But these are remarkable times. "Today, democracy was placed in quarantine," declared Jobbik president Péter Jakab after the 30 March parliamentary vote in Budapest.

Yes, that’s what it looks like. Democracy is on hold. Whether and when that quarantine will be lifted seems to have less to do with the corona virus’s progress in Hungary and Europe than with prime minister Viktor Orbán’s desire for power.

On Monday, the Hungarian parliament adopted – by a large majority – an emergency law giving Orbán and his government sweeping powers to deal with the corona crisis. In practice, the decision means that parliament has suspended itself.

Politicians and pundits across Europe have expressed their outrage over the fact that Orbán can now govern by decree. But is this situation as remarkable as it seems? Hungary is not the only European country in a state of emergency. Fundamental democratic rights are being undermined all over Europe, as fear of the virus spreads among politicians and populations at a speed that far exceeds the reproduction factor – the infamous R0 – of SARS-CoV-2.

Austria was one of the first countries in Europe to respond to the corona crisis with new legislation. "§1. To prevent the spread of COVID-19, it is prohibited to stay in public space." So goes the first paragraph of the law passed unanimously by the Austrian parliament almost three weeks ago.

This is strong medicine.

And many EU member states have followed suit. Infected as he is by COVID-19, Boris Johnson’s actual freedom of movement may be limited, but even though he is now forced to rule by video conference, he is arguably endowed with more far-reaching powers than any British prime minister since Winston Churchill. And Emmanuel Macron’s martial rhetoric goes iron fist in glove with the draconian measures now applied in France, a country "at war".

So, the state of emergency is everywhere. But the law that was passed in Budapest on Monday has two components that make developments in Hungary different from those in most other European states.

Orbán’s Corona Coup is all the more unsettling because these extraordinary powers have been conferred to him and his government indefinitely. There is no time limit – for that limit is decided by Orbán and his government alone. The Minister of Justice’s formal declaration that parliament can repeal the law whenever it wants is just that – formal, and empty. Parliament is entirely dependent on Orbán and his party Fidesz, which holds a two-third majority in the legislature, to make any decision.

The second thing that makes Hungarian “democraship” more dictatorial than the Austrian, British, French or Italian versions – and makes Orbán a true "victator" – is how the new law deals with the media.

When Donald Trump brands CNN and the New York Times “fake news”, and describes journalists as "the enemies of the people," the numbers of viewers and readers surge. Trump’s Twitter rants have – what a paradox! – been the salvation of at least part of the American quality media. Around the time of the 2017 presidential inauguration, this media was on the verge of perishing from sheer digital fatigue.

Imagine, then, that any such accusation of "fake news" could actually be followed up with prosecution and even imprisonment for the designated journalists…

It is this free-speech nightmare that has now become a corona-driven reality in Hungary. Disseminating "false information" in the wake of the virus, or even criticizing the measures taken to deal with the crisis, can lead to up to five years in prison.

And who decides what is "fake news"? Orbán and his government, obviously.

There are no liberals, Orbán said in a recent state of the nation address. "A liberal is nothing more than a communist with a degree." That he is now using an international health crisis to take Hungary a step further into authoritarian illiberalism should not surprise anyone – neither in Hungary nor in Brussels.

The Corona crisis can hardly be described as liberal democracy’s finest hour. But there is a lot at stake. First and foremost, public health. And of course the economy. But also the democratic system itself: the open society, with its rights and its freedoms, is under severe pressure. In Hungary, an alternative has long been formed and formulated. Whether it remains an exception depends not least on how long the European state of emergency will last. When it becomes the rule, it will already be too late.