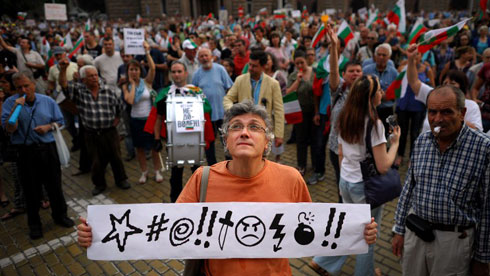 Voice of the citizens

A wave of protest is washing through the Balkans. From Slovenia to Bulgaria, people are taking to the streets to denounce abuse of power. Citizens are speaking out to demand new policies.

An anti-government demonstration in Sofia, July 11, 2013

It all started with just seven people. “A friend asked me to drive straight over to the parliament building. We wanted to express our own opinion for a change”, Zlatko Abaspahic recalls. Each had experienced difficulty in registering their newly born babies, due to the fact that parliament had proven incapable of passing an act regulating such matters. It was the beginning of the baby revolution, which held Bosnia in its grasp throughout the summer.

Armed with prams, drums and whistles, they called their politicians to account. Not only on the issue of registering births, but also diverse matters varying from financial difficulties at universities to the exorbitant salaries pocketed by members of parliament. “This was the first time in 20 years that people had thrown caution to the wind to express their dissatisfaction”, says Aldin Arnautovic, another of the demonstrators present from the very beginning.

Protest movements such as this have become a trend. Croatia, Romania and Macedonia all witnessed their own spontaneous demonstrations. And last winter, in Slovenia, the prime minister, the leader of the opposition and a mayor were all forced to resign.

In Bulgaria, furthermore, the government and a mayor threw in the towel this spring, while the country is currently experiencing by far the largest protests witnessed in the Balkans. For over two months now, thousands of people have been blockading the streets around the parliament building in Sofia, demanding new elections.

[[The members of parliament have since gone into recess as though there were absolutely nothing wrong]], while the protests continue without let up. In the hot evening sun, the atmosphere around the deserted parliament building is humid with sweat and the saliva flying from literally thousands of whistles. One banner reads: “Have a nice holiday!”, while another tells MPs: “August will not save you.”

“Now you can see how difficult it is to depose communists”, says Hristo Vodenov, referring to the ruling class of politicians – opposition and government alike – whose roots are firmly planted deep in the country’s communist past, which the demonstrators now wish to do away with once and for all.

Keeping up the pressure

The triggers that persuade people to take to the streets are invariably local issues. While the protests are briefly focused on a particular affair or figure, it does not take long from them to expand. The genie is out of the bottle and the populace has a taste for more.

No matter how localised they are, the protests have a great deal in common. Srdja Popovic, who gained renown during the popular revolt in Serbia which brought down Slobodan Milosevic, nowadays serves as an advisor to such groups. He calls it the "people's power": “These movements, similarly to those in Turkey and Brazil, have shown both that mainstream politics is losing its legitimacy, and just how quickly creative, yet ordinary people can become a major player.”

The legitimacy of the political establishment is under pressure throughout the Balkans. Corruption scandals and political cynicism have undermined confidence. Election pledges are widely considered a joke. And yet each country has politicians who stubbornly refuse to step down, no matter how compromised they become.

[[What sort of changes do the demonstrators actually want, though?]] The contours are already clear. Activists are calling for greater transparency and accountability on the part of their politicians. They are demanding concrete achievements for the taxes they pay, but above all respect. The politicians are there to serve the people, not vice versa.

However, rarely is a concrete agenda defined. What unites the demonstrators is their aversion to this dominant form of political behaviour. It’s a fragile alliance, however. “I really don’t like those people at all”, a liberal demonstrator in Croatia tellingly admitted, gesturing towards a group of nationalist fellow demonstrators. “However, I loathe the government even more...”

As long as such demonstrations are aimed at the entire political establishment, there is unity. Political parties attempting to link arms with the demonstrators are jeered off the platform. “We are not here to simply replace the current government with another similar bunch”, is a common slogan.

Not one of these numerous protest movements has so far produced a leader, however. Anyone who attempted to assume this role promptly fell from their pedestal. Key figures in the organisation swiftly shun the moniker "spokesperson", in fear of being immediately reviled by their fellow demonstrators. Strategies are therefore often discussed in public. Every single demonstrator has the opportunity to step forward and say their piece.

This lack of leadership and a clear agenda is both the greatest strength and weakness of the protest movements. While it enables such movements to unite large and diverse groups of people, it also implies that no one ever steps forward to actually implement reforms. The official opposition is considered just as suspect as the incumbent government. And the jumble of new small parties has so far failed to secure public confidence. Elections therefore run the risk of losing the power to bring about change.

According to surveys held in Bulgaria, almost half the population supports the demonstrations. It is therefore tempting to conclude that this is the same half that usually abstains from voting. The sense of aversion and distrust is so deeply embedded that "politics" is viewed as the problem, rather than the solution.

Governments therefore generally opt to try and weather the storm. In Slovenia, for instance, Prime Minister Janez Janša remained in office for more than a month after everyone else had agreed that his political career was over. The Bosnian parliament decided to announce a "rest period", in the hope that the demonstrations would blow over. And in Bulgaria too, Prime Minister Oresjarski refuses to heed the call for new elections. He has so far attempted to regain control by alternately ignoring any protest and implementing populist measures, such as increasing pensions and child benefit payments.

In the absence of concrete objectives, it is impossible to say whether the wave of public revolt will ever prove successful. However, a crucial victory has perhaps already been secured. [[“We have abandoned our previous apathy and shown that we can achieve things by all standing together”]], says Arnautovic in Sarajevo. “Even if this movement were to collapse tomorrow, new groups would still be able to build upon the foundations it has laid.”

Belgrade’s Centre for Applied Nonviolent Action and Strategies (CANVAS) specialises in the theory of people power. CANVAS publishes books, holds lectures and supports protest movements in an advisory capacity on request. Its founder, Srdja Popovic, views the current wave of demonstrations in the Balkans in close conjunction with those in Brazil and Turkey: "Citizens are learning how to call their politicians to account."

Interaction with these politicians will subsequently prove crucial. Do the demonstrators have a clear vision, and are they capable of acquiring discipline? And might politicians in turn discover that they share joint values with the demonstrators, or will they simply condemn them as traitors and terrorists, as the Turkish Prime Minister, [Recep Tayyip] Erdoğan, has already done?

When judged by these standards, the Slovenian revolt would appear to have been the most successful so far: Compromised politicians have been banished from office, while the new government comprehends that it remains under the wary eye of the general public. It should become clear during the next few months whether protest movements in other countries can also achieve this.