Notebook AEJ debate on the future of Europe 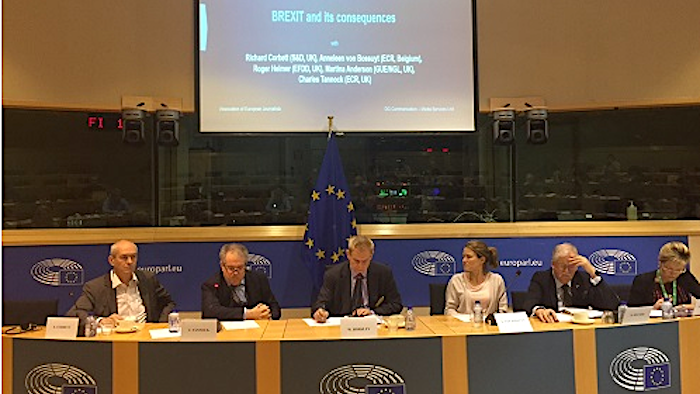 Notebook AEJ debate on the future of Europe

Voices from the European parliament on Brexit and beyond

A chorus of discordant voices rang out in the European Parliament in Brussels as AEJ journalists met with MEPs from all parts of Europe and all the political groups for two days of lively debates in the run-up to the UK’s delivery of its ‘Brexit letter’, on 29 March. The event took place as the EU sailed into unknown territory beyond its 60th birthday and the UK prepares its own lifeboat to disembark from the mother ship.

A chorus of discordant voices rang out in the European Parliament in Brussels as AEJ journalists met with MEPS from all parts of Europe and all the political groups for 2 days of lively debates in the run-up to the UK’s delivery of its ‘Brexit letter’ on Wednesday. The event took place as the EU sailed into unknown territory beyond its 60 th birthday and the UK prepares its own lifeboat to disembark from the mother ship. William Horsley writes:-

‘This is a sinking ship’, Dutch Liberal MEP Marietje Schaake said about the EU, which she herself has tried to reform in the field of civil rights. She blamed big retreats in the EU’s handling of refugees and migration, and the ‘exploitation of fear’ that she says has taken hold among parts of Europe’s population. ‘Europe turns 60 in the midst of its worst crisis ever’, echoed Juan Fernandez Lopez Aguilar, the Spanish Social Democrat and ex Justice Minister. ‘Europe ‘is frozen, paralysed’, he complained, telling the assembled AEJ journalists that Europe has failed to unblock a crisis of extraordinary complexity that has dragged on for ten years. That crisis included failures to manage Europe’s external borders, to respond to the humanitarian crisis of refugees, and to find answers to popular disaffection and unrest.

There were voices of hope, too. Lopez Aguilar saw hope in the powers vested in the Lisbon treaty, at least on paper, to build a true Europe of values, with social rights and the rule of law, including the Charter of Fundamental Rights with its supposedly binding force. But member states, he claimed, had behaved in appalling ways, by fighting the Commission when it sought to assert the common purposes of the EU concerning the basic rights of its citizens and the fair treatment of refugees and migrants.

Several MEPs who spoke on the Future of Europe saw the option of a ‘multispeed Europe’ -- put forward as a possibility in Commission President Jean-Claude Juncker’s recent White Paper -- as a chance for a fresh start. Manfred Weber, the German CSU politician who leads the biggest grouping, the EPP, in the European Parliament, said that Britain had made a historic mistake in deciding to leave the EU. No European country, he said, could defend itself alone against extremism or the cyber-actions of terrorists. The remaining 27 EU member states would be tough in the coming Brexit negotiations, he declared.

Mr Weber added that he ‘could not understand’ why prime minister Theresa May had not already guaranteed the rights of the millions of other EU citizens living in the UK, so leaving them in uncertainty as well as the UK nationals living on the continent. Some journalists present recalled that other states and senior EU representatives had said publicly that no specific matters could be settled before the actual Brexit talks begin -- not even that pressing human issue for some 4.4 million people across Europe.

After Wednesday’s Brexit letter the first talks are likely to start in May or June. And Theresa May said on Wednesday that among the British government’s first priorities will be to reach a mutual accord with the ‘EU of 27’ on the question of the status of EU nationals living in the UK and vice versa. For the European Commission Michel Barnier has said the same.

As for the consequences of Brexit, the Flemish MEP Anneleen van Bossuyt said she feared that the UK’s departure would mean the loss of a counterweight to the influence of Germany, with its strongly federalising tendency, and of France. The UK, she said, had fought for better regulation, free trade, and subsidiarity. Belgium as one of the smaller countries, would need to find new allies, as she put it.

The panel discussion about Brexit, with four UK MEPs from various political positions, provided a glimpse in Brussels of the heated and many-sided debate which has engulfed the UK over the past year.

Charles Tannock, a Conservative MEP, made very clear that he is opposed to Brexit and Theresa May’s hard-line approach to it, despite his party affiliation. He saw the UK’s decision to leave the EU as a ‘selfish and destructive act’ by the British. He saw huge or insuperable problems ahead for UK negotiators. The ‘hard’ Brexit’ approach of the UK government was mistaken. The EU side would show itself united and the UK would be unable to achieve the goals it had set out in the time available. Transitional arrangements would be necessary for some time afterwards. And he was not ready, he said, to give up the fight to avoid what he expected to be disastrous consequences for Britain. He would fight to keep the UK inside the EU if that was still possible.

The MEP for UKIP (the United Kingdom Independence Party), Roger Helmer, said it was ironical that his party’s position was closer to Mrs May’s than was Charles Tannock’s, as an anti-Brexit Conservative. Mr Helmer set out his goals: for the UK to be free of the jurisdiction of the European Court of Justice, have strict control of the UK’s borders and migration, and a tough line on payment of any debts demanded by the EU. He wanted no form of ‘quasi or would-be EU membership’ after the UK had separated in two years’ time. The EU, he added colourfully, should be ‘put out of its misery’.

Martina Anderson, an Irish Republican who sits for Sinn Fein in the European Parliament and served as a minister in the power-sharing government in Northern Ireland after the Good Friday agreement of 1998, saw Brexit as ‘absolute madness’ and a threat to peace and stability in Ireland. She recalled that at the times of ‘The Troubles’ there had been 277 crossing-points between Northern Ireland and the Irish Republic, heavily guarded by armed British soldiers as part of the UK’s deadly conflict with the IRA. The prospect of bringing back any border checks for people or trade as part of a new external EU border between the Republic as an EU state and Northern Ireland would be unstable and dangerous.

Sinn Fein wants a designated special status for that border to maintain the present open border, but Brexit would create a new situation. Ms Anderson pointed out that the Good Friday Agreement was based on the assumption that both Ireland and the UK were inside the EU. It also allowed for the possibility of a referendum in Northern Ireland on the creation of a united Ireland – an option which Sinn Fein had raised in the context of Brexit. So the breakup of the United Kingdom could be a consequence, either in Northern Ireland or in Scotland, where the Scottish parliament has demanded a new independence referendum.

Richard Corbett, a Labour MEP who worked as an adviser to Herman Van Rompuy, the first President of the European Council, said that to create the kind of new, close partnership with the EU after Brexit that Mrs May had promised would require a vast amount of work by officials. They must deal with over 7000 issues now handled by EU laws and regulations --such as what to have instead of the UK’s membership of the EU’s Air Safety Agency. He ridiculed the hopes of the British minister for Brexit, David Davis, that the UK's future trade with the rest of the world could be a substitute for its current trade with the 500 million people in the EU's single market.

Brexit campaigners had lied, he said, by suggesting that leaving the EU would be cost-free, and even that 350 million pounds a week in British payments to Brussels would be used instead to boost funds for the national health service. The Labour party was determined, when Brexit-related bills are presented for scrutiny in parliament, to hold the government to its pledge to win the same trade benefits with the EU as the UK has enjoyed as an EU state. Otherwise Labour MPs would vote the bills down, making it hard for the May government to get them through.

Categories
EUPolitics and democracySocietyThe media and freedom of informationEuropean Union