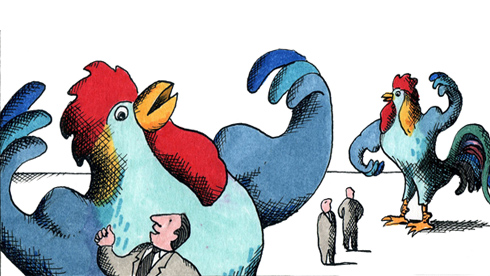 Wallonia on the way to renaissance

For a long time, Wallonia was considered the poor half of Belgium, reliant on aid from rich Flanders. Today, the Walloon economy is back on its feet and the Walloons want to seize their destiny and address the pressure from Flemish separatists.

Visitors to Château Mélot, on the crest of a hill above the Walloon capital, Namur, are pampered like royalty. Their cars are cleaned free of charge, they receive complimentary champagne on their birthday, and their children are treated to an annual visit by Sinterklaas, who is flown in by helicopter.

Money flows easily, as the castle of Mélot is home to the Cercle de Wallonie, a business club for Walloon entrepreneurs. The castle exudes the ambience of a traditional gentlemen’s club, with crystal chandeliers hanging from the ceiling. And not to forget an impressive box of cigars alongside the bar.

“This shows that Wallonia is not just an industrial apocalypse, where the entire population is unemployed,” says André Van Hecke, director of the Cercle de Wallonie. “That’s the view held in Flanders, but it no longer reflects reality. It might have been true in the past, but things are really starting to change in Wallonia.”

The portly Van Hecke, who earned his fortune in the communications industry, started the Cercle de Wallonie in 2006. Initially he had difficulty gaining ground among down-to-earth Walloon entrepreneurs, largely running small to medium-size companies. But with workshops, lectures by successful bankers and entrepreneurs, and ultimately aided by some wine and cigars, Van Hecke won them over. Now Cercle de Wallonie has almost 1,500 members.

“Something is changing in Wallonia,” Van Hecke says. “We are starting to believe in ourselves. But the new socialists too are aware that a different outlook is necessary, that the future does not lie in a state dependent on handouts, but rather in work and enterprise.”

When looking at Belgium, people often focus on Flanders, the rich Northern region that under influence of Flemish nationalist party chairman Bart De Wever is demanding ever more autonomy. It long appeared that the sole ambition of the poorer Walloon region was damage limitation, but that is where a change has occurred.

The Walloons got sick and tired of their underdog position and want to stand on their own two feet. Not that they want separation from Flanders, by no means. But they want to be prepared for when Flanders lays down its demands.

“There is a growing awareness that Wallonia must take control of its own destiny,” says Béatrice Delvaux, chief commentator of the newspaper Le Soir. “There are as yet no polls to support this opinion, but you can feel it in society, you can hear it in the politicians’ statements. Many French-speaking Belgians feel insulted by the Flemish attitude during the crisis, which they feel depicted them as lazy scroungers. They have had enough.”

This new level of Walloon consciousness expresses itself in the first place in the area of economics, where the “Marshall Plan” [a state-funded investment plan unveiled in 2005 to relaunch the Walloon economy] must create a worthy successor to the industrial past. The Walloon government has invested €366m in new, high-tech companies, creating more than 10,000 jobs. And although the big breakthrough is yet to come, the gap in wealth between Flanders and Wallonia has not increased for a couple of years now.

Wallonia is also gaining in cultural self-confidence. Mons (Bergen) will become European Capital of Culture in 2015, while Liege has put itself forward as a candidate for the World Expo of 2017. Mayors of Namen and Charleroi have set the ambition of giving new élan to their cities.

In the political field, meanwhile, the Walloon government launched “Plan Horizon 2022”, which must determine how French-speaking Belgium will be governed in 10 years’ time. Following the new state reform, in a decade, Wallonia will receive less financial support from Flanders. Its economy, education, mobility and building planning will be reformed to reflect this new reality.

“Various politicians are pushing for ever-faster change,” says Béatrice Delvaux. “They want to be ready for the elections of 2014, in case they have to face Bart De Wever.”

According to Delvaux there been various high-level meetings to determine how the French-speaking politicians can present a united front against Flanders. Those meetings are shrouded in secrecy, because critics regard them as grist to the mill of Bart De Wever: if the Walloons set their own course, there is nothing preventing him from dividing Belgium.

“That nothing but an idle threat,” says Jean-Pascal Labille, the secretary general of the Socialist Mutual Societies. “It is used as an excuse by those who resist progress. Bart De Wever will not change his stance, whether we agree with him or not. But if we say nothing, we also do nothing.”

Labille wants the Walloon dignitaries to conceive the ideal Belgian state structure, as a counterweight to the Flemish vision.

Labille would then be very optimistic about the future of the Walloon region. “We have plenty of space, an abundance of qualified workers and an extremely favourable geographical position. If we continue along this chosen path, Wallonia could within 10 years climb to new economic heights.

Viewed from that perspective, the political crisis and the inflexibility of Bart De Wever may well have a positive impact on Wallonia. The Flemish nationalists might have offended the Walloons, but they have also given them a wake-up call.