Ideas Poland, history, and the refugee crisis
Children smuggled from Warsaw's ghetto by Irene Sendler and hidden in a Polish convent, in 1941. 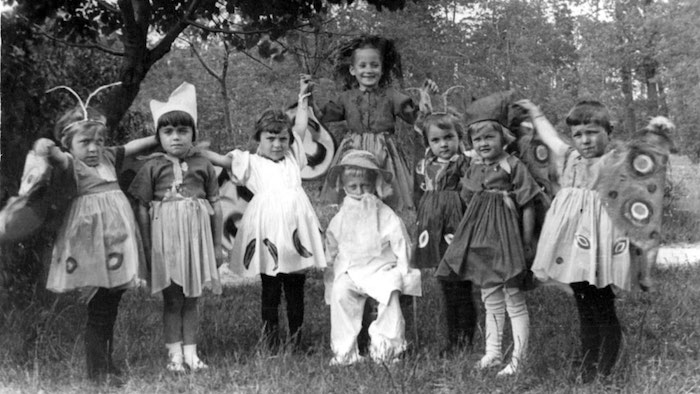 Warsaw’s response calls for a sobering look to the past

The Polish government’s continued rejection of refugees has a bitter sense of déjà-vu. Is it time we start learning lessons from the tragedies of the 20th century?

Children smuggled from Warsaw's ghetto by Irene Sendler and hidden in a Polish convent, in 1941.

Earlier this year, Poland’s prime minister, Beata Szydło, rejected the European Commission’s refugee resettlement plan saying “Poland will not be blackmailed by the EU into putting itself in harm’s way”. Following last week’s terror attack in Barcelona, the country’s interior minister, Mariusz Błaszczak, repeated her words, adding that the resettlement scheme “has proven to be a dangerous mistake” and that the only effective way to prevent tragedies like the one in Spain is for Europe “to shut its doors entirely”.

Politicians in Poland like to justify their anti-refugee stance by comparing the millions of people fleeing war, persecution and poverty in the Middle East and Africa to economic migrants and religious radicals, incompatible with the country’s cultural identity. Time after time, a violent act committed by a Muslim person, refugee or not, is used as a reason why Poland should not accept any people from those parts of the world. At the beginning of the summer, Błaszczak said letting even a single refugee into the country would risk turning it into a “breeding ground for terrorists”. Poland, he continued, must therefore defend the continent’s “Christian civilisation” from “the Islamic fighters who threaten to kill us”.

The anti-refugee rhetoric, spewed by Błaszczak, Szydło and many others, appears to be working. Only two years ago, 74% of Poles surveyed said the country should at least temporarily admit refugees from the Middle East and Africa, according to Public Opinion Research Center. A poll conducted earlier this year found 75% opposed to the idea.

As the political language becomes ever more vile and the society divided, it is hard not to draw parallels with a not-so-distant point in Poland’s history, echoes of which affect the country to this very day. In the 1920s and 30s, the newly-independent Poland set out to cement its national identity by targeting a religious and ethnic minority, casting the country’s three million Jews into the margins of society and excluding them from the political and economic life.

Dailies and magazines became saturated with cartoon caricatures of Jewish “mongrels” and “crooks”. The Catholic church, under the auspices of one of the second largest political party, began distributing pamphlets that talked of a Jewish plan for global domination. Prominent right-wing politicians openly – and unopposedly – called for the expulsion of all Jews. In the years leading up to the Second World War, a wave of anti-Jewish pogroms and demonstrations spread across the country.

When Nazi Germany invaded Poland in 1939, the rhetoric of hatefulness and prejudice took its toll. As Jews were forced into ghettos and boarded onto cattle trains headed for concentration camps across Europe, most Poles looked the other way. In one of his most famous poems, Nobel-winning poet Czesław Miłosz wrote of people playing on a carousel while the Warsaw Ghetto was burning nearby.

Against this backdrop, a handful of Poles set out to save their Jewish compatriots from certain death. Many in the West have heard of Irena Sendler, who smuggled 2,500 Jewish children to safety, or Jan Karski, who first reported to the Western Allies about the Holocaust, but there were others who never held a gun, never tasted battle, never dreamt of becoming heroes.

Between 1942 and 1944, Leszek Klewicki and his mother, Stanisława, hid seven Jews in the attic of their house in Radość, just outside of Warsaw. Years later, Klewicki would recall that the hardest part was keeping the sheltered Jews “together and away from the windows”. One day a contingent of Germans arrived to search the houses in the neighbourhood. The Jews decided to run for the forest to prevent the Klewickis from being arrested or shot for harbouring fugitives, but Stanisława blocked their way. “She said whatever their fate was, ours would be the same,” her son recalled.

By the time the Soviet army liberated the town in 1944, the seven harboured Jews were still alive, and they would remain in touch with the Klewickis for many years to come. Leszek Klewicki passed away earlier this year in Warsaw; his mother died in 1963.

In 1993, both were named Righteous among the Nations, an honorary title given by the Yad Vashem Holocaust Memorial in Israel to gentiles who risked their lives to save Jews during the Second World War. With 6,620 honourees – on top of the thousands of others who are yet to be recognised – Poland has the most Righteous of any country in the world.

As I listen to the political leaders of today explain why Poland will not accept any of the thousands of refugees stranded at Europe’s doorsteps, I think back to Klewicki, his mother and others like them.

Seventy-five years ago, this handful of Poles reached out to the people condemned by the rest of the society. They did so in spite of the hateful rhetoric of the political elites and the resultant societal apathy. It’s time we do the same.