The European press on Brexit 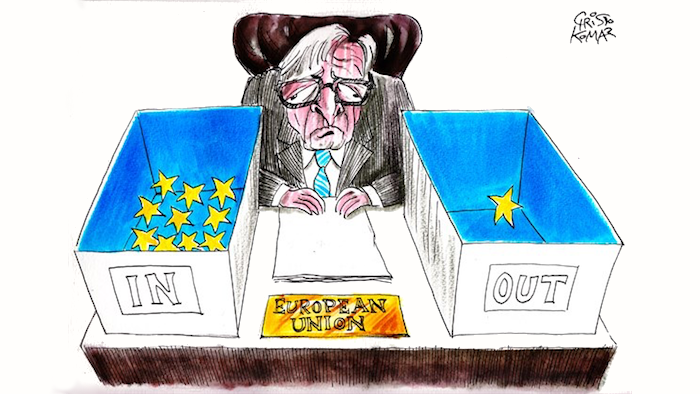 The European press on Brexit

“We must contain the desire for revenge against the British”

During the European Council meeting held on 28 and 29 June, essentially devoted to the outcome of the referendum on the UK’s departure from the EU, European leaders indicated to the British Prime Minister that they wish to see London start the leaving process quickly, so as to put an end to the current uncertainty.

They also implied that his country would not benefit from any preferential treatment compared to other non-member states. For European commentators, a long, sometimes painful period of negotiations is beckoning, with Scotland’s role shrouded in uncertainty, after it stated its desire to remain within the EU.

The first post-Brexit summit set the tone. “Neither side will make it easy,” writes Ruth Berschens in Handelsblatt:

we should expect very heated disputes between the UK and the rest of the EU in the two years to come. Cameron served first in the match during this summit. Free movement of goods and services within the European single market is a good thing, but the freedom for people to move and settle abroad is not – this was Cameron’s lesson. And the EU should jolly well distinguish between them. The President of the European Council Donald Tusk reacted immediately. Free movement of labour is, for him, the ‘essence’ of Europe’s shared values, and indispensable to the EU. But all this was just for show since Cameron now means little to the EU – he’s a thing of the past. His successor will already be in place for the next EU summit in October and it is at that moment that the real farewell to the UK will begin. It looks set to last a long time and the wait will be a painful one.

Dagens Nyheter argues EU leaders need to keep their cool and leave some time before the negotiations on the UK’s departure from the Union:

In fact, Great Britain is still a full member of the EU and will remain so until the decision to leave has been made. Cameron’s continental colleagues should therefore swallow their disappointment and show some patience with the British – at least unless it becomes clear they are delaying for tactical reasons. A two-year delay does not seem reasonable. [...] The EU cannot repair its reputation as a democratic project by humiliating the British. Authoritarian empires punish their dissidents. The EU must go through the separation without showing a desire for revenge.

Anna Słojewska argues in Rzeczpospolita that “the EU needs reform but should not start a debate on treaty alteration.” Not even the Polish Prime Minister “Beata Szydło has called for this to happen [during the European summit], even though she announced she would. Ultimately reason won out and she only spoke of the need for reform in very general terms.” For Anna Słojewska, David Cameron claims the EU is responsible for the result of the referendum because —

it did not offer him enough concessions regarding the restriction in the number of workers coming from other EU countries, in particular Poland. [...] Brexit has therefore paradoxically united member states. The continent wanted to show the British that there will be no compromise on the European values they have rejected.

El Periódico analyses the fallout from a local perspective, because “the uncertainty generated on the continent by the Brexit win has been worsened by another collateral crisis with important consequences for Spain. Scotland’s desire to remain within the European Union has implications on the Catalan independence movement.” Scottish First Minister Nicola Sturgeon’s visit to Brussels is“ is quite some symbol (David Cameron in London and Scotland representative in Brussels), a symbol that angered the Spanish government” headed by Mariano Rajoy, for whom – El Periódico continues –

Scotland’s exceptionalism is a major problem, not only for the possible rise of independence movements, with Brussels ready to listen to ‘new states’, but also with Gibraltar. The authorities on ‘The Rock’, where the No vote won by a landslide, want to join the Scottish strategy so that both zones remain within the EU. [...] According to the Minister of Foreign Affairs, Jose Manuel Garcia-Margallo, the Spanish government will once again propose that Gibraltar be returned to Spain after a reasonable delay and after a transitional period of joint sovereignty.

“London is explicitly aiming to play for time by drawing out the withdrawal period in order to work out how to solve an impossible equation: remaining within the single market while denying free movement of citizens,” explains Leonardo Maisano. For Il Sole 24 Ore columnist,

if the 27 member states see it as unacceptable to have a single market missing its most visible expression – its citizens – it seems that they have managed to close ranks regarding how much delay to allow London to make, at least judging by the European Parliament’s decision and the words of Chancellor Merkel. London must begin negotiations with its European partners, who hold its future in their hands. The worst possible move it could do would be to spin out an eventual return to the fold. The UK is aware of this and so is trying to divide the European front to win a few extra weeks to answer the question that tormented Lenin: what should be done? It is a good question that London has asked alone. Only it can provide the answer.