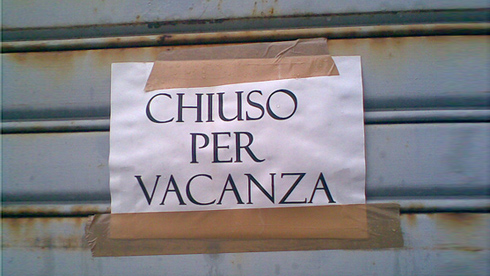 Many Italians are coming home from their holidays to discover their job has disappeared and the company they worked for has folded. Bankruptcies during the holidays are common in Italy, but this year they have become the norm, writes Süddeutsche Zeitung.

Alessandra B |  "Closed for holidays"

August is the month when Italians forget the world around them, and the whole country switches off: four weeks to spend with friends, family, at the beaches, bars, out in the sunshine. Politics and the economy? It’s on the television news. But it’s all so far away. And, fortunately, you can turn the television off.

This year, though, things are not as they once were. At the start of August many Italians set off for the beaches with a heavy sense of foreboding, a worrying premonition that life could be very different in September.

Chiara, a young woman in her mid-30s, is holidaying at the small bay of Palinuro, south of Salerno. It’s a quiet place. The sea is blue-green, but Chiara cannot enjoy it. She takes a big drag on her cigarette and tells her story. She works for a construction company, near Naples. Her wages have not been paid for six months, and now she’s afraid that she will come home from the beach and there won’t even be a job for her, that the company itself will have gone. Companies going bankrupt over the holidays are a common phenomenon in Italy. This year, though, it’s become the general rule.

[[Many of the mostly small companies have been stuck in the red for years]], victims of an endless recession, which has not let up even in the second quarter of the year, when things picked up elsewhere in Europe. And it does not look as if the situation is going to get better.

Quite the contrary: the country, which has lost many valuable years in orbit around one man and his economic interests, political poker games and nocturnal orgies, is troubled. And also because the man who refuses to die, Silvio Berlusconi, still has the country and its economy firmly in his grip. Several times prime minister and convicted of tax fraud, he recently made his support for prime minister Enrico Letta’s coalition government conditional on a repeal of a tax on primary residences. Berlusconi’s party is also threatening to bring down the government if Berlusconi is expelled from Parliament following his conviction for tax evasion. From government officials to economists to stock traders in Milan, everyone is now warning that if Berlusconi does bring down the coalition, the consequences for Italian society and the economy could be “dramatic”. And that holds for the international financial markets as well.

And so another ghost returns with the 76-year-old Berlusconi: the fear of the “spreads”, or the differences between the interest rates paid on Italian and German government securities. For a few weeks recently these risk premiums for Italy had been declining and are currently at about the level they were at two years ago. [[It’s not only the Milan stock market that has suffered losses thanks to the political turmoil]] in Rome: yields on 10-year Italian government bonds rose again and were higher than those of similar Spanish securities. If the trend persists, Italy will have to pay more to issue government securities and the spreads will rise again. The timing, though, would be inconvenient: by the end of the year, analysts estimate, Rome will have to take on €65bn in new debt. Should this be more expensive for Italy than planned, this in turn would have consequences for the country’s economy – a first small up-tick in economic activity could again be nipped in the bud.

Many Italian companies would rather not wait any longer. They’ve had enough. One such is a supplier of hydraulic components for lifts, Hydronic Lift in Pero near Milan, which wanted to shut down just for three weeks – and, this Monday, did not re-open. Or the coup launched by the Firem company in Modena, a manufacturer of electrical resistors. When the 40 employees packed their suitcases at the start of the month, their boss was there to wish them a lovely holiday. The hall was hardly empty before he began to dismantle its machinery. Its destination: Poland. “If the staff had found out that I planned to shift production abroad, they would have occupied my factory,” he said. He was just trying to survive. It did not matter where.

The Eurozone’s third-largest economy has fallen far behind in terms of competitiveness and productivity and sunk to the level of many countries in Africa. Poland, for Italians, has become the Promised Land. Trade unions are warning that the company closures on the sly, with no prior announcement, has become “a kind of sport in vogue among entrepreneurs this summer.” Those affected are defending themselves. Too much bureaucracy, coupled with inefficiency, political instability, high taxes and an ever-growing underground economy. What’s more, is Italy’s largest group, Fiat, not threatening to relocate its corporate headquarters to the United States?

A family of five children, with €1,600 per month to live on. This is just one of the examples given in an Italian report published by the French daily La Croix to illustrate the “record [poverty] not seen in Italy since 2005, according to the National Institute of Statistics”.

“This family is among the 14 million poor inhabitants of the peninsula – including 4.8 million who live in absolute poverty,” adds the Catholic newspaper.

In Italy, couples with three or more children are most affected by poverty and the lack of effective social policies.

La Croix cites figures from an Italian survey institute, which report that –