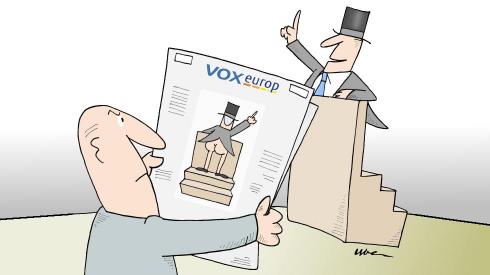 When Presseurop ceased publication we announced that we would not say goodbye, but rather “until we meet again”.

On no account could we simply drop a platform for European news and discussion that was playing a critical role in the emergence of a European public space. And the idea of abandoning the community that had coalesced around Presseurop was unthinkable.

The movement of support triggered by the announcement of the closure of Presseurop only served to reinforce these convictions.

With a new name which is more in tune with the goal of creating a truly European service to reflect all of the voices in Europe — not only voices from the press, but also those from social networks and individual citizens — VoxEurop will feature content in ten languages on the same principle as Presseurop. In so doing, it aims to make an even greater contribution to the emergence of a European public opinion, which is an indispensable condition for real democratic debate at the level of the continent.

Staffed by former Presseurop journalists, translators and developers, VoxEurop is run by a non-profit organisation that was formed to carry the torch when it became clear that the press titles which managed Presseurop were unwilling to continue publication of the news website following the withdrawal of funding from the European Commission on 22 December 2013.

Thanks to the devotion of a group of volunteers, the first step of ensuring that the articles already published by Presseurop would remain online, which was by no means guaranteed, has now been enshrined in an agreement with the former operators of Presseurop.

However, we will not be able to move forward to the next step (the establishment of a permanent team to ensure a frequency of publication that our readers have come to expect) without your help.

The drive to produce a multilingual news and debate website that can cater to half a billion readers has to overcome significant editorial, technical and, most importantly, economic challenges. We have the ambition, the enthusiasm and the will. However, funding — without which this effort will not be truly sustainable — is much harder to find. VoxEurop will first and foremost need to rely on support from everyone who has the heart to keep alive a truly European media service. We are counting on you!