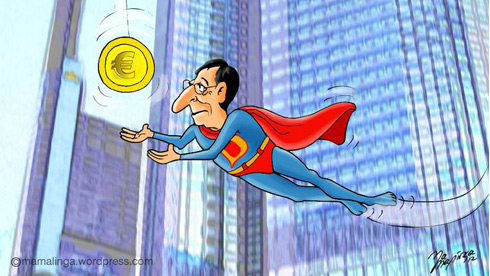 ‘What’s come over the ECB?’

In a move that came as a surprise to many analysts, on November 7, the European Central Bank cut its key interest rate bringing it down to 0.25 per cent. Although unexpected, the decision has generally been welcomed, reports the European press.

"European interest rates close to zero," runs a headline in Austrian daily Die Presse. The paper notes that 0.25 per cent is "the lowest rate since the euro was introduced". Since inflation is already at its lowest level (0.7 per cent) since 2009, with this measure, the paper explains, the ECB wants to combat the risk of deflation — a drop in prices that could lead to a fall in consumption. In conjunction, the European Commission is expecting a rise in inflation of 1.5 per cent in 2013 and 2014 in the eurozone. For Die Presse —

Many experts were expecting a cut in rates because this conforms to the announcement made by the ECB to maintain its easy money policy. [But] the fact that it acted so rapidly is a surprise. [...] The cut leaves little wiggle room at the bottom, but, according to ECB governor, Mario Draghi, the Bank has not played all of its cards yet.

With the cut in its key rate, "the ECB promises to make money easily available to the financial markets [...] but there are questions about the positive effects of the move, explains for its part German daily Süddeutsche Zeitung under a headline saying "Money has never been so cheap". Those with savings, the paper says, could find that —

… this seemingly abstract decision may have direct consequences on their lives. Easy money could lead to inflation and reduce the worth of the savings of millions of Europeans. Soon, they will get no interest for their conventional term deposits or savings accounts.

"ECB lowers rate in surprise move," says Italian daily Il Sole 24 Ore, adding that Frankfurt's move carries two messages – one for the markets and the other for politicians —

… on one hand, the ECB is an independent central bank, whose monetary policy is still inspired by stability, but it is aware of the deflation risk, so it is not afraid to ruffle the feathers of both hawks and doves. On the other hand, ECB's policy keeps running into the inability of Brussels and the national governments to design the only policies that have an effect on growth: structural ones.

"The ECB mobilises against deflation and a strong euro," says French financial daily Les Echos. The paper is full of praise for the governor of the Bank, Mario Draghi, whom, they say, "has a certain talent for going against the market forecasts while keeping them happy. Certainly, the paper admits —

… a quarter of a base point may not seem like much. It will obviously not suffice to whip-up the still sluggish European economy. Yet it is a lot. This is a new demonstration of the 'Draghi method'. His is a very different style from that of his predecessors at the head of the ECB. He is more proactive, more pragmatic and more flexible. He is also more inclined to stretch the limits of the central bank's mandate. [...] The ECB has undoubtedly not finished being surprising because, contrary to conventional wisdom, it is far from having used up all of its ammunition.

"The key rate is lower still. What has come over the ECB?" wonders Dutch daily De Volkskrant. The paper notes that the decision will have negative consequences on the competitive edge of northern European countries. Thus, for the first time, the paper says —

… the rate cut decision was not unanimous. Out of the 23 members of the ECB, several voted against. It is practically certain that the opposition came from the north of Europe and that the governor of the [German] Bundesbank, Jens Weidmann, was one of those that voted against.