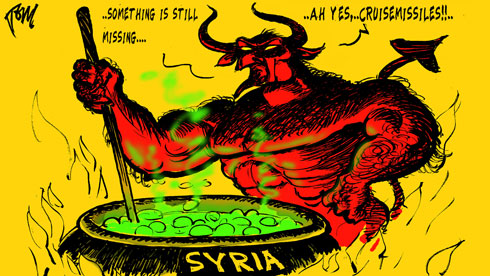 Where are all the intellectuals?

In the past, writers, philosophers and other western thinkers mobilised to demand their governments act – or not – during international crises. Why are they so silent about Syria, as the conflict escalates and the prospect of military intervention looms?

There was a time that intellectuals around the world formed a united front whenever a global situation required it. The standard procedure was as follows. Two or more thinkers would draft an appeal to the United Nations or some other authority, circulate the text among their fellow intellectuals and then print the final version in the French newspaper Le Monde. This appears to be a thing of the past as far as Syria is concerned.

Two years ago, in June 2011, seven writers and thinkers still took the trouble to urge the Security Council to adopt a resolution which would facilitate intervention in Syria. “It would be tragic and morally unacceptable if this resolution is not discussed or is simply binned under the threat of a veto or blank vote.” Signatories: Umberto Eco, David Grossman, Bernard-Henri Lévy, Amos Oz, Orhan Pamuk, Salman Rushdie and Wole Soyinka. All writers and one Nobel prize winner.

Nine months later, almost 50 global personalities tried again, this time in connection with Syria. The German philosopher Jürgen Habermas, ex-president Richard von Weizsäcker, the novelists Eco and Grossman, once again, and 40 others wrote that the discord in the international community had given the Assad regime the false idea that “violent reppression is an acceptable way to get things done”.

Since then the silence has been deafening. However, the French are keeping up the pressure. In their country the issue has become subject of an important public debate. The philosopher Bernard-Henri Lévy is voicing his objections, just as in 2011 when the focus was on Libya, along with his compatriots, André Glucksmann and Bernard Kouchner (a former minister of foreign affairs).

In October last year this trio argued in Le Monde that France and America should take military action to avoid the Syrian rebels adopting an even more anti-western stance. “Enough excuses. Enough cowardice. The democratic future of Syria requires us to respond decisively,” wrote Lévy, Glucksmann, Kouchner and a fourth intellectual in Le Monde.

Lévy and Kouchner spoke out again last week. [[Lévy referred to the Russian and Chinese vetoes as “shameless”]] on television on the 22th of August. When asked about the assessment that Assad would be succeeded by Islamists, he stated, “Against the backdrop of gassed children, that is an obscene line of reasoning”. On the radio Kouchner said, “We have wasted a lot of time. Although it is now more difficult, we have to do something. Some kind of face-saving gesture”.

Diametrically opposed opinions are also being voiced. For example in France where Jean-Marie Le Pen, who is honorary chairman of the National Front, yesterday sneered at his compatriots who wanted to go to war “from the comfort of their Parisian bistros.”

This approach is derived from the hyper-Realpolitik approach of the American conservative commentator Daniel Pipes (son of the famous historian and Russia expert Richard Pipes). Pipes argues in favour of support for Assad and compares this choice with the allied coalition in the Second World War. As he wrote five months ago, “Stalin was much more of a tyrant than Assad,” but, after 1941, it was “essential to keep German troops involved in the Eastern front” and therefore to support the Soviet Union.

In an article in the right-wing newspaper The Washington Times he dreams of a situation in which “Tehran and the rebels and Ankara fight each other to the point of mutual exhaustion.” Pipes recalls the Iran-Iraq war (1980-1988), claiming that [former Iraqi president] Saddam Hussein started the Gulf war and was more brutal. However, [former Iranian Supreme Leader] Ayatollah Khomeini was “ideologically more dangerous and aggressive,” Pipes claims and then proceeds to quote an apocryphal wisecrack by Henry Kissinger. “It is a shame both cannot lose”.

However, this attitude which Lévy regards as “obscene” does not explain why the French philosopher is failing to mobilise so few supporters. The Canadian historian and former politician Michael Ignatieff made an attempt two weeks ago in the Boston Review.

Ignatieff is himself an advocate of intervention. “It is a mess. We need to proceed with care. However, the international community has a huge responsibility to prevent the worst from happening after Assad’s fall”, he said to the Canadian Globe and Mail newspaper in March.

However, Ignatieff is able to analyse why risk-avoiding behaviour in the West is now being referred to as “Realism” with a capital “R”. In the Boston Review he compares the Syrian crisis with the crisis in Bosnia two decades ago. According to him, there are two crucial differences.

In the 1990s, Russia was on its knees and China’s growth was only just beginning. “Neither of them stood in the way of intervention. The Syrian crisis is now exposing the contours of an entirely different world.” The second difference that is preventing action being taken is equally important. [[Intervention requires more than just compassion for the victims]]. It requires “being able to identify with an issue that the democratic electorate in the West can really take to heart”, Ignatieff asserts.

“The Bosnians understood that. They came across as supporters of European values, for example via Mo Sacirbey, their minister of foreign affairs, who had an excellent command of English. Although the bombardment of Sarajevo and the fall of Srebrenica were the reasons for intervention, the ideological foundation had already been laid.”

To intervene or not to intervene? The West’s dilemma

“Lively debate over a Syrian intervention,” headlines French daily Le Monde in its edition dated August 30, over an article posing the question of whether “a military intervention against Damascus is justified”. According to Rony Brauman, former head of Doctors Without Borders, “with the use of chemical weapons a level has been reached which requires a reaction”. Brauman, who favours a humanitarian intervention, explains that his stance based on the fact that chemical weapons,

are designed only to create terror while conventional weapons aim, for the most part, to gain strategic positions. The physical suffering is both huge and undetectable. Although it does not change the magnitude of the killing, it represents a qualitative leap in the conduct of the war.

Le Monde notes that “public opinion does not favour intervention” by the military and looks at the doubts expressed in Paris, London and at the United Nations regarding diplomatic strategies. It also says that London has “given up on immediate action,” while French President

François Hollande took advantage of the visit of the President of the Syrian National Coalition, Ahmad Jarba, to [Paris] on August 29 to stress options other than armed intervention in Syria.