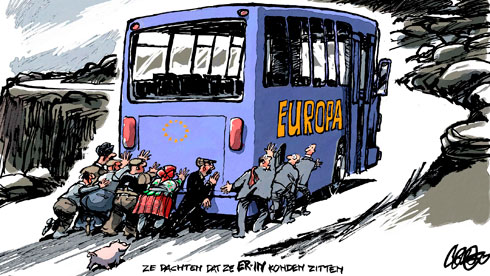 Where has the region’s solidarity gone?

Exactly 10 years ago, Poland, Hungary, Slovakia and the Czech Republic were given the right to enter the EU. But despite close economic ties and a sense of shared destiny, different political developments prevent them from having real weight in the Union.

They thought they could sit INSIDE

The tenth anniversary of the conclusion of Poland’s EU accession talks in Copenhagen on December 13, 2002, is approaching.

Poland was given a green light to join the EU alongside nine other Central and Southern European countries. It was the last moment when the region showed a genuine united front, fighting for the best possible terms of accession. Since then our paths have diverged, each country bargaining on its own in Brussels and trying to consolidate its relations with the key EU players.

In fact, the political and economic paths had been diverging even before. The political stages in the ten countries that joined the EU in 2004 are hardly similar at all, except perhaps for their invariably solid dose of populism.

Their views on European integration differ too. Slovakia is in the eurozone, the Czech Republic remains sceptical, Hungary is valiant, and Poland, while generally in favour of the euro, feels that joining during a crisis would not make sense.

However, despite all this, these 10 countries now fundamentally depend on the EU. This is a crucial point of our geopolitical orientation and a fundamental source of modernisation funds. EU funding is present in 99 per cent of public projects in Hungary and 50 per cent in Poland. Across the board, the EU creates a greenhouse effect for investment.

In Polish politics, the region had usually been perceived as an alternative, not a goal unto itself. It was either ignored, because there more important things such as the Weimar Triangle or bilateral relations with the major players, or used (by the Law and Justice administration in 2005-2007) as a counterbalance for what was perceived as excessive dependence on Germany.

Today, Central Europe has become a means of avoiding marginalisation in the EU. The tectonic movements going on in Europe can cancel out what we have become so proud of, that is being in the heart of Europe.

We are assuming that if we stick with the others in region, we should be able to prevent a two-speed Europe. In doing so, we are turning a blind eye to what should worry us, such as how democracy is being practised. We must be aware of the side effects of this. Hungary and Romania are testing a new political culture in the region, pushing further and further the thin red line where democracy ends. If we fail to notice that, the plague will come to us too.

What unites us more than anything else are elements of a common past, a sense of not so much a shared identity as a common fate and common interests in the EU. The latter factor played a key role during the accession talks back in 2003 and later, during previous budget debate. Now its significance has waned because differences have grown and so has a sense that it is possible to achieve more through bilateral relations (e.g. Poland and Germany).

Mutual confidence has diminished too and Poland failed to convince its regional partners to veto the climate change policy together.

We have not done our homework either. The International Visegrad Fund was set up in 2000 but it was an exception to the rule of poor investment. The time to plug the resulting gap is now. Poland currently holds the Visegrad Group presidency and has tabled a solid, 53 page-long agenda. Two items are obvious: “connecting” the region’s countries through links in transport and energy infrastructure and defining common interests in the EU, from the single market to security issues.

We have a common success record. The Visegrad Group countries’ combined GDP amounts to a trillion dollars (€770bn), four times the mid-1990s level. This means that Central Europe is more than a “state of mind”. But it is still a far cry from becoming a political entity of considerable influence.