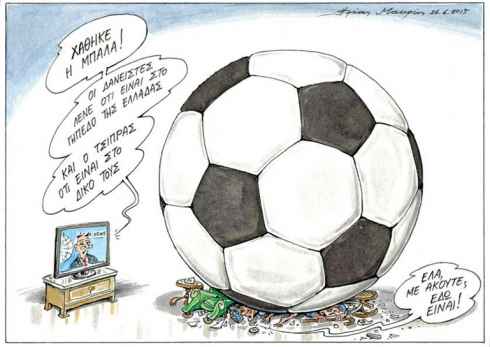 Who’s got the ball?

Where's the ball? Creditors say it is with Greece and Tsipras says it's with them.
Hello, can you hear me? It's here!

On 26 June, after a new round of negotiations between the leaders of eurozone members, Greek Prime Minister Alexis Tsipras announced that a referendum would be held on 5 July on the series of austerity measures demanded by Greece's creditors in exchange for a bail-out plan worth 15.5 billion euros over the next five months. The bail-out aims to avoid default on payments and the probable Greek exit from the eurozone. Tsipras called for Greeks to reject the plan.

Tsipras also announced that Greece's banks would close until the day of the referendum, following the decision of the European Central Bank not to increase emergency financing to Greek banks. In order to stop capital flight, savers will not be able to take out more than €60 a day, nor make payments abroad without government authorisation.

You can unsubscribe at anytime *
Categories
EUPolitics and democracySocietyGreeceGreece