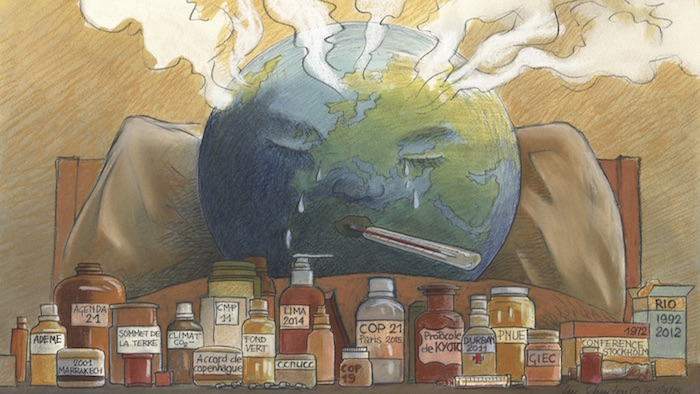 Why is this Climate summit so important

A short guide to what is at stake in the most critical climate event of the decade, in the form of a Q&A.

What is happening in Paris this December?
The governments of more than 190 nations will gather in Paris to discuss a possible new global agreement on climate change, aimed at reducing global greenhouse gas emissions and thus avoiding the threat of dangerous climate change.

Why now?
Current commitments on greenhouse gas emissions run out in 2020, so at Paris governments are expected to produce an agreement on what happens for the decade after that at least, and potentially beyond.

Why is this important?
Scientists have warned that if greenhouse gas emissions continue to rise, we will pass the threshold beyond which global warming becomes catastrophic and irreversible. That threshold is estimated as a temperature rise of 2C above pre-industrial levels, and on current emissions trajectories we are heading for a rise of about 5C. That may not sound like much, but the temperature difference between today’s world and the last ice age was about 5C, so seemingly small changes in temperature can mean big differences for the Earth.

Why has nobody thought of getting a global agreement on this before now?
They have: global negotiations on climate change have been carrying on for more than 20 years. The history of climate change goes back much further: in the 19th century, physicists theorised about the role of greenhouse gases, chiefly carbon dioxide, in the atmosphere, and several suggested that the warming effect would increase alongside the levels of these gases in the atmosphere. But this was all theoretical.

Only in the past few decades have scientists begun the measurements necessary to establish a relationship between current carbon levels and temperatures, and the science conducted since then has consistently pointed in one direction: that rising greenhouse gas emissions, arising from our use of fossil fuels and our industries, lead to higher temperatures.

Hasn’t global warming stopped?
No. Global temperatures have been on a clear upward path. There was a spike in 1998, after which temperatures were lower – but still warmer than previous decades – that led some climate sceptics to claim that the world was cooling.

During the period since 1998, global temperatures have risen at a slower pace than they did in the previous 30 years. That, too, has been seized upon by sceptics as evidence that global warming has “paused”.

But it is important to note that temperatures have not fallen, or stalled – they have continued to rise. Given the variations that characterise our weather systems, a period in which the rate of warming slowed is not unexpected.

For the past two years, the rate of warming seems to have accelerated again, but little can be construed from that.

What progress have we seen on a global agreement?
In 1992, governments met in Rio de Janeiro and forged the United Nations Framework Convention on Climate Change. That agreement, still in force, bound governments to take action to avoid dangerous climate change, but did not specify what actions. Over the following five years, governments wrangled over what each should do, and what should be the role of developed countries versus poorer nations.

Those years of argument produced, in 1997, the Kyoto protocol. That pact required worldwide cuts in emissions of about 5%, compared with 1990 levels, by 2012, and each developed country was allotted a target on emissions reductions. But developing countries, including China, South Korea, Mexico and other rapidly emerging economies, were given no targets and allowed to increase their emissions at will.

Al Gore, then US vice-president, signed up to the protocol, but it was quickly apparent that it would never be ratified by the US Congress. Legally, the protocol could not come into force until countries representing 55% of global emissions had ratified it. With the US – then the world’s biggest emitter – on the outside, that was not going to happen.

So for most of the following decade, the Kyoto protocol remained in abeyance and global climate change negotiations ground to a near-halt. But in late 2004, Russia decided to pass the treaty – unexpectedly, and as part of a move to have its application for World Trade Organisation membership accepted by the European Union. That made up the weight needed, and the protocol finally came into force.

So we had a global agreement?
Not quite. The US, under George W Bush, remained firmly outside Kyoto, so although the UN negotiations carried on year after year, the US negotiators were often in different rooms from the rest of the world. It was clear a new approach was needed that could bring the US in, and encourage the major developing economies – especially China, now the world’s biggest emitter – to take on limits to their emissions.

What followed was, agreed at Bali in 2007 after much drama, an action plan that set the world on the course to a new agreement that would take over from Kyoto.

This is taking a long time. What happened next?
It did take a long time. But getting agreement from 196 countries was never going to be easy. The next act of this long-running drama fully demonstrated that: the Copenhagen conference of 2009.

What happened at Copenhagen?
Everything but the treaty. All of the world’s developed countries and the biggest developing countries agreed – for the first time – to limits on their greenhouse gas emissions. This was a landmark, as it meant the world’s biggest emitters were united towards a single goal.

The emissions reductions agreed on were still not enough to meet scientific advice, but they were a big advance on reducing emissions compared with “business as usual”.

Is that important?
It depends on your viewpoint. The Kyoto protocol was a beautifully written, watertight, fully legally binding international treaty, a sub-treaty of the similarly binding UNFCCC. But it never met its objectives, because it wasn’t ratified by the US, and not by Russia until it was too late. And none of the countries that failed to meet their commitments under Kyoto have been sanctioned.

But the targets agreed at Copenhagen, in the form of a document signed by world leaders, still stand.

Nations responsible for more than 90% of global emissions have now come up with their targets – known in the UN jargon as Indended Nationally Determined Contributions or INDCs . These include all of the major developed and developing countries, though their contributions vary: in the case of developed countries, actual cuts in emissions, but for developing countries a range of targets including limits on emissions compared to “business as usual”, and pledges to increase low-carbon energy or preserve forests.

Analysis of the INDCS, endorsed by the UN, has suggested that these pledges are enough to hold the world to about 2.7C or 3C of warming. That is not quite enough to meet the scientific advice. However, that is not the end of the story. One of the key components of any Paris agreement would be to institute a system of review of the emissions targets every five years, with a view to ratcheting them upwards.

Another, and complementary, approach is to make more effort to bring down emissions outside the UN process, for instance by engaging “non-state actors” such as cities, local governments and businesses to do more.

If the commitments from the major countries are in the bag, does that mean the Paris agreement is settled?
Not at all – the other key question, apart from emissions reductions, is finance. Poorer countries want the rich world to provide them with financial help that will enable them to invest in clean technology to cut their greenhouse gas emissions, and to adapt their infrastructure to the likely damage from climate change.

This is a hugely contentious issue. At Copenhagen, where the finance part of the deal was only sorted out at the very last minute, rich countries agreed to supply $30bn ($20bn) of “fast-start” financial assistance to the poor nations, and they said that by 2020, financial flows of at least $100bn a year would be provided.

As a cornerstone of any Paris agreement, poor countries want assurances that this pledge will be met. That has now been given, in several forms: the OECD issued a report in October showing that two thirds of the finance required is already being supplied; and a report by the World Resources Institute showed that the remainder can be made up by increased finance from the World Bank and other development banks, and from the private sector. The World Bank and several governments have already committed to upping their financial assistance, meaning that a clear path towards the 2020 target can now be discerned.

There is more, however. Poor nations also want a similar provision in place beyond 2020, but there is strong disagreement over how this should be done. Some want all the money to come from rich country governments, but those governments are adamant that they will not provide such funding solely from the public purse. They want international development banks, such as the World Bank, to play a role, and they want most of the funding to come from the private sector.

An agreement on this is still possible, but it will be one of the main obstacles to a Paris deal.

What else can we expect [from] Paris?
The key question now is over security. With the French capital under recent attack, and reports of fresh assaults averted by the armed forces, the atmosphere in Paris will be unlike any city that has hosted major international talks before. Security will be paramount - the French police and army will be on the streets, and the venue will be patrolled by uniformed UN guards - but the atrocities of 13 November will hang heavily on all delegates. This may mean that when world leaders attend private meetings, terrorism is discussed before climate change. But it may also mean that delegates are under more pressure than ever to come up with a deal, given the tragic circumstances surrounding them.

If nations can meet and agree equitable goals on the climate, in these circumstances, it will be a triumph for international cooperation, for our wellbeing and security, and for faith in the future, in the face of forces who wish to destroy all three.