Ideas Germany and the refugee crisis 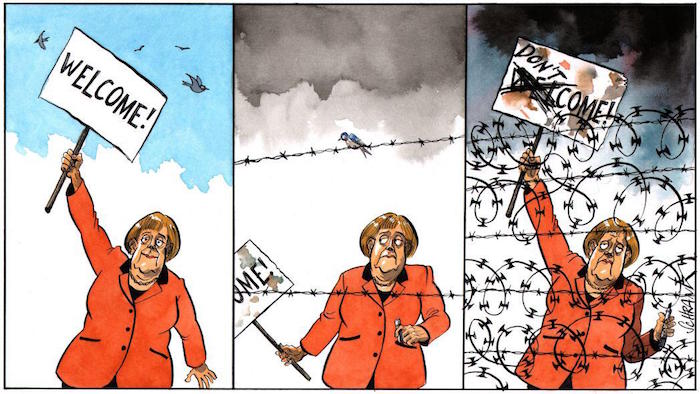 Ideas Germany and the refugee crisis

Why political tensions are likely to get worse

The consequences of a million refugees arriving in Germany last year are yet to play out fully. Its impact on the labour market, the volatility of the economic situation and some crucial upcoming elections might well shake the country’s stability.

The refugee crisis has already polarised German politics to an extent many people – including myself – would not have believed possible only a few months ago. Within the conservative party (CDU/CSU) there are thinly concealed discussions about getting rid of Angela Merkel and the right-wing populist party AfD is riding high in the polls.

What worries me most is that the political pressure is likely to become even fiercer because a European solution is clearly not on offer (as more and more countries are trying to close their borders one way or another) and the statistics in Germany suggest that there is a delay in the real impact of the refugee crisis.

The EASY system, which counts new arrivals, recorded 1.1 million refugees coming to Germany in 2015. Yet this has not translated into asylum applications yet. Last year’s number of asylum applications – less than 0.5 million – is not that far off from figures in the early 1990s when the war in Yugoslavia triggered large-scale dislocation (see table).

Where does this mismatch come from? The likes of the Daily Mail claim that 600 000 people are unaccounted for and might be freely roaming around Europe (of course with the possibility that they might all be headed for Britain).

There are issues with the numbers (double counting for instance) but given that the vast majority of refugees specifically wanted to go to Germany the more likely explanation for the discrepancy is simply that there is a massive backlog in asylum applications: the bureaucracy is working at capacity and cannot process any more paperwork. The German home secretary has promised to create 4000 more jobs in 2016 to deal with this issue.

Another question is how likely and how quickly refugees will enter the labour market. Official research based on past experience suggests that less than 10 percent of refugees find a job within one year. After five years the proportion in work is about 50 percent. As educational levels of refugees are a challenge, providing quick education opportunities is crucial. The fact that the vast majority of refugees are young (81 percent below the age of 35 and 55 percent below the age of 25) gives a chance to quickly enhance educational levels.

A crucial second delayed impact beyond asylum applications after initial registration is that refugees by and large only enter unemployment statistics once their asylum applications are processed. This means higher unemployment figures (the researchers predicted a modest increase last autumn) are only going to show up later this year and going into 2017. So as refugees keep coming in vast numbers they will add to the backlog as the full impact of this influx works its way through the system.

Put this together with the increased volatility of the global economy creating potentially significant downside risks for the export-dependent German economy and the electoral calendar with 5 state elections (three of them on the same day on 13th March) in 2016 and three more as well as the federal elections in 2017 and you can see why the political pressure is likely to increase even further.

Against the backdrop of an already much more sceptical public opinion following recent incidents – 60% of the population now thinks that the country cannot cope with the refugee situation – most key indicators point at more political conflict. We need some sustainable political solutions and we need them swiftly or the erosion of Europe will continue and its integration process in particular might be damaged beyond repair.