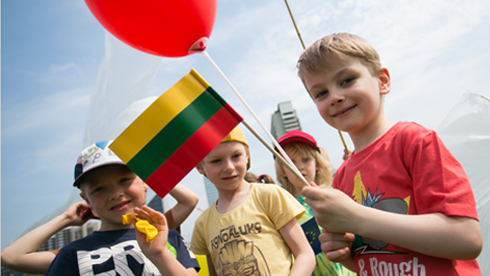 Will Lithuania rekindle faith in Europe?

On July 1, the Baltic state takes over the EU’s rotating presidency for the next six months. Its mandate is set to begin in an atmosphere of defiance towards the Union, which is unlikely to facilitate the task faced by Vilnius.

The American think tank, the Pew Research Center recently conducted a study focusing on attitudes to the EU. And what were its findings? Close to 45 per cent of respondents, in the eight countries where research was undertaken, support the EU. A year earlier, the figure for this indicator was 60 per cent. France stood out as the country with the gloomiest mood, and the one where the number of Eurosceptics had increased by 18 per cent in a year; 58 per cent of French citizens said they lacked confidence in today’s Europe. Our Polish neighbours partially compensated for this loss with 68 per cent in favour of the EU. However, over the border in the Czech Republic, the opposite is the case with the same number unfavourable.

“Disappointment with regard to the EU can largely be explained by the economic situation, and this is particularly the case in Eurozone countries, where people definitely see a link between precarity, the single currency, and decisions the EU has taken to save it,” explains Ramunas Vilpisauskas, the director of IIRPS, Vilnius University’s Institute of International Relations and Political Science. “In some countries, for example in Lithuania, people have less confidence in national institutions than they do in those of the EU. Having said that, there are many countries where confidence in both national and European institutions is in free fall: Greece is an extreme example. People have already expressed their disappointment in national votes, and they may opt to do the same in next year’s European parliamentary elections,” he remarks.

Experts also argue that the impact of attitudes espoused by national elites with regard to the EU should not be underestimated. For Kęstutis Girnius, the examples of the Czech Republic and Poland show that the ruling elite has a considerable influence. “In Poland, political leaders have always been supportive of the EU, and today the country expects to play an important role in the community. In contrast, I would argue that if it had been up to the Czech Republic’s last president, Vaclav Klaus, he would have booted the Czech Republic out of the EU. In Prague, the communist party is still influential, and we know that the socialists are also cautious about the EU,” explains the professor of political science.

“Let’s not forget the speech made by [Polish Foreign Minister] Radoslaw Sikorski in Berlin [on November 28, 2011], in which he urged Germany to show more initiative in resolving the Eurozone crisis and guiding the EU towards greater integration. Such a statement of position on the part of the government goes down well with most of the citizens of Poland. At the same time, it is important to point out that the Polish economy has escaped recession during the crisis, a fact that is also likely to influence the views of its citizens,” remarks Ramunas Vilpisauskas.

As for the French, they are annoyed, among other things, by the new balance of power within the EU. “Until the crisis, France played an important role in Europe. There was, in a manner of speaking, an informal deal between France and Germany, according to which Germany was the economic locomotive, but left many important political decisions to France. However, this arrangement is a thing of the past. Even when Merkozy (Angela Merkel and Nicolas Sarkozy) were holding the reins, the balance was beginning to shift and the French were none too happy about it,” explains Kęstutis Girnius.

Careful not to go too far…

So what is the situation in Lithuania? If a study similar to the one conducted by the Pew Research Center was undertaken in our country, would the Lithuanians be more like the Poles or the Czechs?

Vilpisauskas insists that for the moment, Lithuanians remain in favour of the EU, although this may not apply on every issue. “For example, the relatively large number who were opposed to the introduction of the euro when compared with those who supported it, shows that Lithuanians are sceptical of greater integration, at least in this field. This is probably due to price increases and declining purchasing power, as well as the uncertainty that continues to prevail in the Eurozone,” points out the IIRPS director.

During Lithuania’s presidency, in spite of the population’s support for the European Union, it will be difficult to improve the EU’s image. “Small states have difficulty looking after the EU’s image, in particular because of their lack of resources,” remarks Kęstutis Girnius.

Vilpisauskas adds that Lithuanian foreign policy decision makers will have to prioritise the interests of the population of Lithuania, if they are to avoid coming under fire from critics for going too far during the country’s presidency.

Authorities are already being taken to task for the intensive public works in the country’s streets, as though we were trying to hide a mediocre situation by excelling ourselves before the EU. The presidency of the European Council could enable Lithuania to improve awareness of European affairs in this country. As to whether or not that will contribute to more positive image for the EU? It is hard to say …