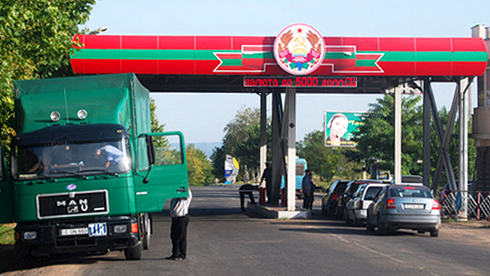 Will the EU spread to the Dniester?

When it signs an association agreement with the European Union in November, Moldova is hoping to draw the pro-Russian breakaway province of Transnistria in its wake — a situation that has prompted fears of a fresh outbreak of violence on the banks of the Dniester.

Dieter Zirnig  | The Bendery border crossing between Transnistria and Moldova

“Attention! You are leaving the European sector” warn signs posted in Varniţa. Recent troop movements in this border village have revived fears of another conflict on the Dniester. Let’s not forget that Transnistria harbours, in Cobasna to be precise, the largest conventional weapons depot in eastern Europe. Furthermore, the Russian gas pipelines that supply Romania and Bulgaria pass through Transnistria, where they are managed by Tiraspoltransgaz, a company controlled by Gazprom.

In Chişinău there is talk of resolving the conflict with the breakaway province within the framework of Moldova's integration process into the EU. On the west bank of the Dniester, this seems to be an ideal solution – a trajectory that will make Chişinău more attractive to the east bank. What does this attraction entail?

[[Moldova could bring Transnistria two economic benefits: access to European funds and access to western markets]]. "The economic situation is precarious in Transnistria. Tiraspol (the capital) is interested in EU money, and European funds destined to reinforce confidence between parties are already seen as a source of internal development," a Brussels official recently explained. "Foreign donations" account for 75 per cent of the region's budget with exports representing 25 per cent. Because the region is not recognised internationally, its exports go through firms registered with the Chişinău chamber of commerce so as to benefit from the "autonomous trade preferences" (ATP) awarded to Moldova by the EU.

The ATPs will end, however, this year when the Deep and Comprehensive Free Trade Area (DCFTA) agreement between the EU and Moldova, enters into force. According to a 2012 report by independent analysts Expert Grup, nearly 40 per cent of Transnistrian exports (metals and metal products, energy and light industry products) concern the EU – mostly Romania, but also Italy and Germany.

The total value of trade between Romania and the breakaway province is estimated at €31m per year. If the government in Tiraspol refuses to cooperate with Chişinău and implement the conditions required by the DCFTA agreement, which is to be signed at an Eastern Partnership summit in Vilnius on November 28-29, the Transnistrian business community may find itself excluded from the new agreement and subjected to the EU's 17 per cent customs tariff.

But can the political behaviour of this mainly Russian-speaking region be radically changed by such economic stimuli? While Moldova hopes to sign the famous Vilnius accord, Tiraspol is brandishing the threat of its "State Borders Law". Adopted by the Tiraspol Supreme Soviet on May 23 and approved on June 10 by President Yevgeny Shevchuk, the law redraws the borders of the territory under the sovereignty of the Pridnestrovian Moldavian Republic [as Transnistria is officially called]. Tiraspol thus announced – annoying Chişinău, the Organisation for Security and Cooperation in Europe (OSCE), the EU and the Council of Europe – that checkpoints would be set up on the [new] border in the three months following the promulgation of the law, that is by September 10.

Varniţa, (located 17km from Tiraspol and 65km from the Moldovan capital), which is currently under the jurisdiction of the Chişinău government, is one of the villages included on the new map [of Transnistria]. Last spring, local residents opposed Tiraspol's decision to install a border checkpoint [in the village]. In its relations with the two governments, Varniţa is a village divided. Of the 700 pensioners living there, 500 receive a pension from Tiraspol, paid in Transnistrian rubles, the others get theirs from Chişinău (in Moldovan leu).

The former receive the equivalent of €123, the latter €52. Certain residents have also given up their Moldovan passports and applied for Transnistrian papers [which cannot be used to cross international borders] to seek work in Tighina (also known as Bender), where salaries are 30 per cent higher, even though the journey to the city involves two border post crossings.

Since March 2013, authorities in Chişinău have also been talking about setting up border checkpoints with the breakaway province. According to the local Russian-speaking press, this initiative has been prompted by a Moldovan decision to impose entry visas on Transnistrian residents with Russian or Ukrainian passports, [a majority of the population]. [[It is true that controlling migration flows at the administrative borders of the Dniester is a condition for the easing of visa requirements with the EU]] but the extent of the security zone – 255km – could be an obstacle to its implementation.

It is highly possible that Tiraspol will block the implementation of measures along the Dniester demanded by the EU. The apparition of new border posts of the Checkpoint Charlie type [the main crossing point between East and West Berlin during the Cold War] on the Dniester will be seen in Tiraspol as a victory for the European Union and a setback in terms of international recognition.