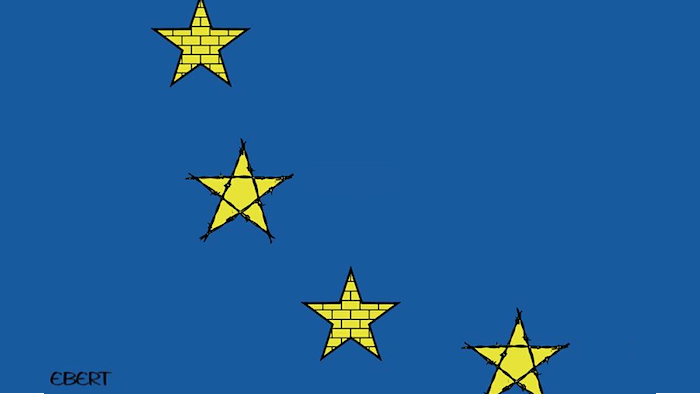 Will the rise of nationalism mean the end of the EU?

Will the European Union make it through 2016? It has never been hit by such a series of blows in its sixty-year history. Some, like the nationalist resurgence, could prove to be fatal.

“I see for the first time a real danger that the EU could collapse”, Günther Oettinger, the German EU Commissioner for Digital Economy and Society, gravely declared at the end of December. Meanwhile, Jean-Claude Juncker, the President of the Commission, the EU’s executive body, has said he has “no illusions” about the coming year and, in jest, claimed to be still “too young” to say if 2015 was the most difficult year in the EU’s entire history…

Since 2008, Europe has been between a rock and a hard place. Its problems were prompted by a string of bankruptcies in the US in 2007, which in 2008 gave rise to an economic crisis, the worst since 1929 and still lingering on in Europe. It is a crisis that almost brought down the eurozone and has left Greece on its knees. US foreign policy adventures, along with British and French interventions, have destabilised North Africa, Iraq and Syria; a million people have now sought refuge in the EU, and homegrown terror has burst back into life. Meanwhile, the EU’s diplomatic fumbling has reawakened the Russian bear, leading to a partial dismantling of Ukraine and tension between eastern and western Europe unseen since the fall of Communism in 1990.

The EU has had to respond to this web of crises, which European states did not always see coming and certainly did not want to anticipate, since that would have forced them to hand over sovereignty as a precautionary measure. And it has sometimes succeeded, as the accelerated integration of the eurozone has shown. But what was once possible with nineteen countries – albeit imperfectly because of the French refusal to renegotiate European treaties – has not been so with twenty eight. The ever present refugee crisis has uncovered huge rifts between east and west, showing the extent to which enlargement has been bungled.

For some western European countries, principally Germany, asylum and respect for minorities are values born out of a violent and tumultuous history. However, this is not the case for the former people’s republics. They still see themselves as victims of history with rights and not responsibilities. Hungry for European money and the rights offered by the EU, for them solidarity only travels in one direction. They have therefore refused to come to the aid of countries engulfed by the waves of refugees (despite also being partly responsible for the situation, since they too entered Iraq in 2003) and, above all, have violently rejected Muslims, who they perceive as as unassimilable into European civilisation… Walls have been hastily erected in the east and the Commission’s remarks that the EU must act as one have been met with undisguised hostility.

The economic crisis prepared the ground for this retreat back to national boundaries, and paved the way for europhobic populists. After 1929, many countries believed fascism to be the best response to the challenges of that time. Eighty years later, people are likewise drawn towards extreme solutions, today known as “populism”: the authoritarian right is at the helm in Poland and Hungary, working as part of the government in Belgium, Denmark and Finland, and is rapidly expanding in Sweden, France, the Netherlands and Italy. At this point, only Germany and countries with recent experience of dictatorship (Spain, Portugal, Greece) seem immune. Islamist terrorism has only strengthened those parties whose bread and but consists of rejecting ‘the other’.

This is all to say that the European project, founded on peace, tolerance, freedom, the just and open state, is floundering: the zeitgeist now lies in defending the narrowest, most immediate and most illusory forms of national interest.

How long can the EU, a project born out of the ruins of the post-war period, resist the wave of xenophobia and paranoia that is sweeping across our old and exhausted societies? Instead of going against the current of public opinion built on fear, European leaders on the right and the left have found no better strategy than to follow the extremist parties, as can be seen in France. Nothing seems capable of stoping this return to nationalism, the very thing that is pulling Europe towards the abyss.