Report Social Model
Supporters of Bayern Munich celebrate victory in the League of Champions. London, May 25, 2013. 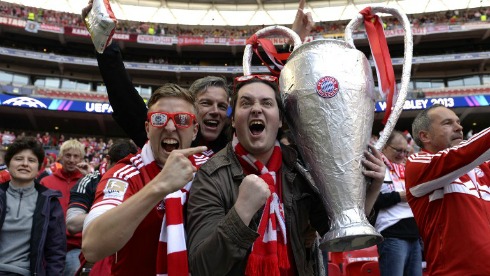 Winner takes all – but not all over

The current crisis shows that some are getting by better than others because they know how to bend the rules to suit themselves. Europe must resist a “winner takes all” state of mind while responding to the industrial challenges it faces, suggests a Romanian columnist.

Supporters of Bayern Munich celebrate victory in the League of Champions. London, May 25, 2013.

Manchester United, FC Barcelona, Real Madrid, Bayern Munich, Borussia Dortmund: these football clubs post exceptional revenues and give their players millions of euros in annual salaries. Some transfers are in the tens of millions and result in the concentration of “value” in a handful of clubs.
This is why we have seen the creation of the Champions League, a competition between the wealthiest teams. True to the economic theory of agglomeration, increasing returns, and information and position asymmetry, the gaps between rich and poor teams widen day by day. The Europa League, the second major European league, provides access to the less wealthy clubs, including many from Romania. Clubs everywhere are sinking deeper and deeper into debt.
I am using these examples derived from sports economic models to illustrate some recently-occurring phenomena: the erosion of the middle class, the expanding revenue gap and most of all, the privileged status of the financial sector.

This is explained by the rapid spread of globalisation (which favours economic activity in countries providing cheap labour) and the development of new information technology, but also by public policies including deregulation of financial markets, overestimating peoples’ ability to adapt to rapid labour market changes, and underestimating the role of industry in supporting technological development.
The current severe crisis revives not only the need for adequate regulation and monitoring of the financial markets, but also the need to repair the kind of economy that places too much faith on the infallibility of the markets and neglects fairness and social issues. With the crises in the United States and in Europe as backdrops, a heated public debate is underway over the state’s role in economic affairs. The different parties are standing by their traditional positions: the right is demanding less state intervention and public spending (with assorted tax cuts), while the left emphasises the need for public holdings and equaty. The dichotomy is often too simplistic.
In Europe, the Scandinavian countries have relatively low public debts and budget deficits, but high public spending. At the same time, corruption and rent-seeking are rather rare occurrences. It is not by chance that these countries also excel at creating strong institutions. As a result, “winner takes all” syndrome is less present. Those who want to scrap welfare programs do not understand that the modern state cannot be separated from its social dimension, and that we cannot return to the capitalism of the 19th century to answer the challenges of the 21st.

Pleading for a banking union and federation as necessary steps for saving the eurozone in a speech to the European Parliament, European Commission president José Manuel Barroso favoured the European model. But it is also true that developed countries must reform their social aid programmes, adjust public services to available resources, and promote better practices of good governance.
How can one judge a society in which most of the citizens earning low or average incomes pay their taxes while those with high incomes benefit from all sorts of regulatory loopholes? The European Union’s major challenge will be finding ways to blend the social safety net and social capital with measures to stimulate entrepreneurship and boost industry and education. At the heart of these desires are ethical problems concerning solidarity and equal opportunity among citizens.
In the United States, the fight against terrorism has brought to light certain questionable, if not illegal, practices on the part of banks and some wealthy individuals. But the true ethical problem cannot be resolved merely by identifying tax evaders. There is now talk of a new industrial revolution, but can it spur productivity in Europe? The problem is that such a revolution, if it were to occur, could no longer be confined to the industrialised West.
“Winner takes all”, as a single view of reality, contradicts the way modern economies function, because redistribution via tax transfers protects social cohesion, levels the playing field and helps to attenuate regional disparities. Hope comes from the fact that personal responsibility and a more modest lifestyle are not in contradiction with concepts such as solidarity, equality of opportunity, equity and fair-play.

You can unsubscribe at anytime *
Categories
EconomyEuropean Union