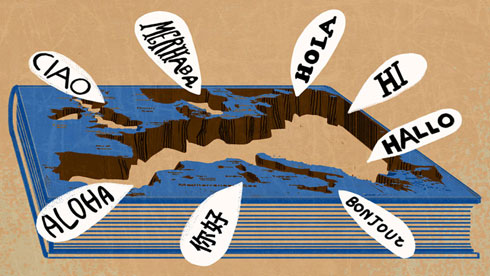 When Presseurop launched in 2009, nobody thought the euro's future would soon be threatened or that the Union would be at risk of implosion. Presseurop has charted all these travails, and has helped Europeans better know each other; a first effort towards achieving the elusive concept of European public space.

Every day for the past four and a half years Presseurop has helped us grasp what has been happening to Europe. In that, it has made a fundamental contribution. Living day-to-day through the crisis, trying not to stumble over the multiple obstacles that are still in the way, we neglect at times to look back and reflect on what has happened to us over these last five years. If we were to do so, we would recall that in 2008 - 2009 the word "crisis" did not scare us.

The building of the European Union, we knew, was brought on by crisis. The crises shaking the foundations of the establishment reveal the infeasibility of the status quo and the need to alter policies, and they expose the obsolescence of the institutions. In the same way, the crises create spaces from which visions of the future and the leaders that will manage them can emerge. The crisis might not only unite us, many of us believe, but might allow us to integrate the union much more closely. Why do we have the feeling that, this time, things did not work out exactly like that? What exactly did not go as it ought to have gone?

The most important element is the inflexibility of the union when it had to absorb the shock waves blown out by the financial crisis. The EU is, above all, a "union of rules". But, as has been demonstrated, those rules, especially in matters related to the governance of the euro, were non-existent, incomplete or entirely wrong, because they forbade member states and their institutions from adopting those measures (such as the direct recapitalisation of banks or the buying of debt) that would have let the EU overcome the crisis.

Source of the trouble

The United States, which as we know is the origin of the financial crisis, adopted as early as October 2008 the TARP (Troubled Asset Relief Program) programme to recapitalise the banks, which was followed, under President Obama, by a massive economic stimulus programme. In both cases, partisan and ideological differences were left on the sidelines to keep from hampering the anti-crisis measures. On this side of the Atlantic, things could not be more different. Six years after the fall of Lehman Brothers, Europeans are still discussing their own TARP programme (banking union), and are doing so with deadlines and mechanisms so complex and drawn out that they raise doubts of their actual usefulness in overcoming this crisis. At the same time, the stimulus measures have been insufficient or risible. [[The results are plain to see: the US has emerged from the crisis, while Europe remains mired in it]].

And so the EU, which spent nearly a decade drawing up the Treaty of Lisbon, found out that nothing in that Treaty helped it deal with a crisis that, at times, has taken on an existential character. Reforming the rules of the game of the euro to adapt them to the new reality has been an infuriatingly slow task, especially in a context of political and institutional fragmentation and lack of leadership. In this crisis the EU has come up with political and institutional innovations, but it has also put together hazardous improvisations. At key moments, as with the first bailout to Greece and the intervention in Cyprus, the impression was that the EU was tossing a coin up in the air and closing its collective eyes.

At the end of the day, the EU, constantly teetering on the verge of an abyss, has been taking the necessary decisions to safeguard the euro and to lay the foundations for a stable future. We will emerge from of the crisis, indeed, but we are doing it slowly and in disunity – because when a structure is flexible, it absorbs shock, but when it is rigid, it breaks or cracks apart. The more obvious and more urgent breach is the one that separates elites from the citizens.

But this is only because this crisis has also divided North from South, or the centre from the periphery, in a way that poses great threats to the future of the EU. And it is also promoting divisions, difficult to resolve, between members and non-members of the Eurozone. These cracks and centrifugal tensions are those that the union must close, because they are putting its actual survival at stake. [[If the union does not close those fault lines, we may find that the euro is saved in the end but the European project has been left gravely damaged]].

The upcoming European elections are already highlighting the paradox that all the more political legitimacy is needed to complete economic and monetary union, all the more disaffection is growing among the citizens and the more distrust there is towards the EU. If the union is capable of reconciling democracy and efficiency, it will have a bright future. That gap, though, will not close up by “communicating better”, but by “listening more” to citizens and being accountable to them.

European integration has become irreversibly politicised in the member states, but not in Brussels. The solution is more policies, not more technocracy, in such a way that citizens regain in Brussels the capacity for making policies that they have lost at home. The union of rules is good, but what we need is a union of policies. Who’s afraid of politics? Without informed public opinion, Europe cannot exist. In recent years, thanks to Presseurop, we have left behind our national mental redoubts and built a European public space. We thank you for it and hope it comes back soon!