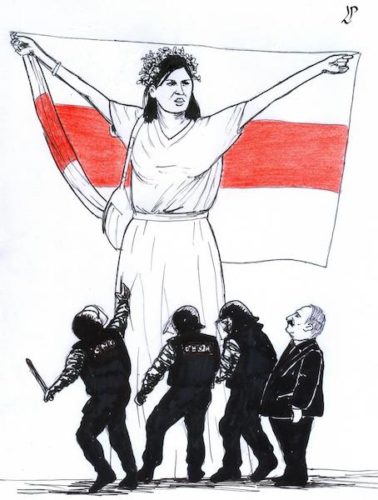 A conversation on the role of women in the Belarusian democratic revolution between Maria Laura Franciosi, from New Europeans, and Ekaterina Ziuziuk, from the Associazione Bielorussi “Supolka”.

On the occasion of March 8th, universally celebrated now as “International Women’s Day” – the only one in the 365 days specifically dedicated to “the other half of heaven” – how are we to understand the role of women in trying to achieve democracy in Belarus?

Ever since the election of 7 August last year, Belarus has been locked in a continuous struggle between the authorities and the people. The former insist on their right to declare victory, regardless of the results, while the latter refuse to recognize the outcome of a presidential election, widely condemned by international organizations as fraudulent.

What has happened in Belarus is “a profound and irreversible change with long term consequences” writes Katia Glod in an article for Carnegie Europe. Katia Glod Is a non-resident fellow at CEPA, the Center for European Policy Analysis.

The “enthusiasm and courage of activists” even if they  “lack formal power or organizational know-how” is highlighted by Glod in her article. She praises “the action of the democratic opposition in exile to spur international pressure on the regime”.  These activists have been the driving force behind the events we have been witnessing.

In fact, Glod urges  “the opposition to transform itself into a real political force at home” to raise awareness and “engage in civil mobilization campaigns which would certainly help rouse the silent majority of the population and erode regime support”.  But she also acknowledges that this will not be enough by itself. What more is needed then?

Since “the bulk of economy in Belarus is state controlled and blocks many people from protesting openly”, Glod argues that is important to, “stop the brain drain of talented people”. Other “actors on the ground who could deliver funds” must be found to create new jobs.  And the EU, she observes, could help with the transfer of skills and expertise through new training opportunities and local educational hubs.

Are women in Belarus perceived only as a symbol of the protests?

Ekaterina Ziuziuk: “Women in Belarus are more emancipated than in Italy, but they are not seen as a key driving force in the economy. But I would say that women have become men’s peers in the struggle with the regime and in the way they are treated by the regime.

At the start of the protests police treated women more gently than men. But now women are beaten up by the police, just like the men and detained in awful conditions in prison.

Their contribution to the protest movement is as important as that of men.

Are people in Belarus aware of the sacrifice made by so many people in the streets?

Men and women protestors are making the same sacrifices in Belarus. Men are badly beaten and tortured while in detention. They are also given more severe sentences.

But women suffer more from the conditions of imprisonment: no sanitary pads, no showers, no bed linen or even mattresses on the iron beds.

Often there are fewer beds than the number of women in the cell and so they have to sleep on the concrete floor.

More : Is there a pathway to freedom and democracy in Belarus?

How is this  engagement and sacrifice reported in Belarus?

The media is not really focussed on the fact that the protest movement is composed of different social groups, maybe because it is so all-encompassing.

The women’s marches that took place on Saturdays were widely reported. The women were highly praised by the general public for their courage.

What more could the EU do to help? Are sanctions not sufficient?

The regime will survive while it still has money to pay salaries to those who beat, arrest and condemn peaceful protesters. Individual sanctions would help, because they would create psychological pressure on those who collaborate with the dictatorship.

We want a peaceful solution and so I’m not sure if a UN force would be a good idea. I don’t know the recipe, to tell the truth. But there is one thing I’m pretty sure about: that it’s the Belarusian people who live in the country who have in their hands the future of the country.

How do you see the role of the Belarusian diaspora in supporting people in Belarus?

Our main duty is to inform western society and keep attention highly focused on the situation in Belarus.

Since last summer the Belarusian diaspora all over the world has been doing this through demonstrations, social media campaigns, establishing relations with politicians, journalists and everyone who can help promote the interests of civil society in Belarus. In Italy, we are continually translating and posting copious amounts of news.

Nevertheless, whatever we do, we still have a feeling that it’s never enough, because the repression, the violence and the suffering of our fellow-citizens goes on. We know our demonstrations encourage those who are now behind this new iron curtain (since 20 December 2020 there are severe restrictions on leaving the country),.

We keep going into the streets here in Italy and elsewhere as much as the pandemic allows us to.  It’s crucial to let those inside Belarus know that they are not alone.

We also participate in various charity projects and donate money, even though the state does everything to block any possibility of helping financially those who have to pay fines or who have lost their jobs because of their political opinions.

Still we do our best and we don’t give up! We just have no other choice.

Maria Laura Franciosi, Katia Glod  and Ekaterina Ziuziuk will be among the speakers at the sixth in the New Europeans series of FB Livestreams on Belarus, East and Central Europe, taking place on Monday, 8 March, 7 PM CET. For more details, click here.