Analysis Youth and the pandemic 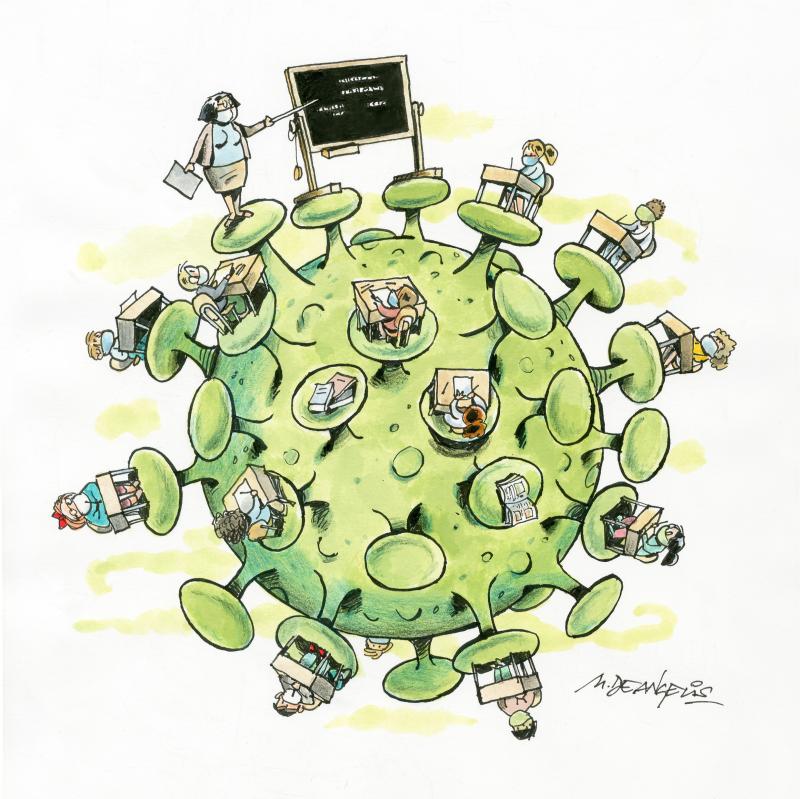 Analysis Youth and the pandemic

Countries across Europe are trying to stem the second wave of Covid-19, which has been raging since the onset of autumn. Meanwhile, the national authorities of EU member states – often supported by public opinion – have regularly singled out the behaviour of young people to explain the pandemic’s resurgence. Can the spread of the virus in Europe be put down to ignorance and flippancy on the part of teens and young adults? What measures have been taken against young people, and with what consequences?

During the first wave of infections that hit the continent in January 2020, the youngest (children and adolescents) were quickly identified as the main – often asymptomatic – vectors of the disease. This link between youth and the spread of the virus led to the widespread closure of schools. Although the school year was able to start at the end of the summer in most countries, warning messages aimed at teenagers and young adults have increased steadily in recent months.

Spain figures highly among the countries that have regularly called young people to order. Its #EstoNoEsUnJuego campaign, launched in early September by the Ministry of Health, have made headlines in the Iberian peninsula. The video clip broadcast by the government on social networks (TikTok in particular) leaves no doubt that it is 15-25s who are the main target.

It is not only in Spain that the young have been pegged as the main culprits in the resumption of the pandemic. Invited in early September on to the BBC's youth-oriented Newsbeat radio programme, the British Secretary of State for Health and Social Care Matt Hancock’s message to young people was, "Don't kill your gran".

This inclination to blame the young has also found expression across the Rhine. Berlin's health minister Dilek Kalayci has targeted young Germans on several occasions, by criminalising parties and other leisure activities often associated with them.

Are young Europeans really to blame for the spread of the virus? Are they taking reckless risks in their day-to-day lives, disregarding the health of their elders? Are they wilfully ignoring the measures taken by authorities, as so many politicians are claiming out loud?

In a podcast broadcast on 27 October by German international radio Deutsche Welle, Marcus Spittler, a researcher at the WZB (Wissenschaftszentrum Berlin für Sozialforschung) and specialist in European youth behaviour, shared the results of a survey carried out by the pollster YouGov. Conducted last September in cooperation with the TUI Foundation, the poll looked at the attitudes and behaviour of 1011 young Germans towards the Covid-19 epidemic.

The data collected and analysed by Marcus Spittler and his team is unequivocal and goes against the prejudices that permeate German public opinion. 83% of the German 16-26-year-olds who were asked said that they "totally or very largely" respect the measures taken by the government, including personal barrier precautions. Only 2% said they completely ignore the recommendations. Of the young people surveyed who comply with the rules, 89% said they do so to protect others and 79% to protect their own health.

Far from being the culprits of the pandemic, young Europeans are among its biggest losers. According to a report published last spring by the EU Science Hub, as many as 58 million European children in primary and secondary schools were deprived of face-to-face education for several weeks.

Distance learning was introduced in the first wave and is now favoured by many European schools. It has brought with it a number of problems that education officials are struggling to cope with. Schoolchildren and students who are forced to follow their lessons from home are at major risk of dropping out or getting left behind. According to a study published in June 2020 by the OECD, 5-8% of French schoolchildren had disappeared from their teachers' radar just two weeks after schools closed. In Germany, 37% of teachers said they had lost contact with almost half of their students in a survey commissioned by the Robert Bosch Foundation in April 2020.

Several factors can explain this outcome: insufficient access to technology, poor or non-existent internet connections, or simply a home where the room layout makes learning impossible. Something else was also highlighted to explain the problems of distance learning: the poor take-up of digital tools by younger people in many EU countries (Italy, France, Portugal and Germany in particular).

The picture is not much better with university students. Higher-education institutions have continued to conduct all lessons and seminars remotely, but at the same time young adults have been the main economic victims of the pandemic, as can be seen in this graph from the OECD, and this one based on data from Eurostat:

As employees in the sectors most hard-hit by the pandemic (tourism, catering, hotels), young Europeans saw their income disappear overnight and without any emergency compensation system to replace it.

The picture of carefree and selfish young people is not supported by the figures, which indeed suggest an austere future for Europeans born in the 2000s.