Report Germany
Angela Merkel at the offices of East German opposition movement Demokratischer Aufbruch, in the autumn of 1989 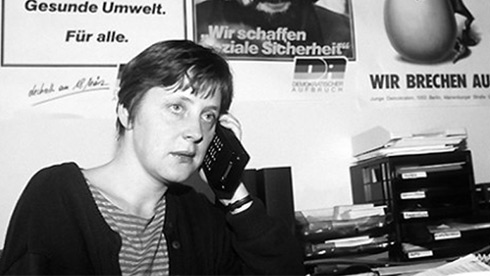 A chancellor made in the GDR

Where does Angela Merkel come from? How has she formed her political ideas? The Germans, like other Europeans, often ask these questions. As the September elections approach, a biography sets out to find the key to her success in her childhood in the GDR.

© Bundesregierung  | Angela Merkel at the offices of East German opposition movement Demokratischer Aufbruch, in the autumn of 1989

A book by journalists Ralf Georg Reuth and Günther Lachmann coming out this week under the title Das erste Leben der Angela M. [The first life of Angela M.] yields a few insights about Merkel's relationship to the GDR regime. Despite Merkel's own protestation that she had always inwardly opposed the SED (Socialist Unity Party) system, the authors believe they can prove that her role in the GDR, as well as in the years of political upheaval, were more complex and less flattering to the chancellor than the conventional legend has it.

Angela Merkel, untouched by ideological indoctrination, this legend goes, always longed for a West German-style democracy and got through the DDR years in a kind of internal exile. This legend is grounded not least in the idea that Merkel's Protestant family background as a pastor's daughter preserved her from the temptations and illusions of the Socialist state doctrine.

A closer look at this background, however, reveals a very different panorama – the enmeshment of Evangelical theologians, among them Merkel's father, in the DDR system.

Merkel was born Angela Kasner in Hamburg on July 17, 1954. Her father Horst Kasner, a priest [who moved to East Germany with his family in 1954], belonged to that circle of theologians that the Soviet-controlled East German leadership wanted to use to implement their policy towards the Church. And so these theologians, who saw in Socialism a real alternative to Western capitalism, founded the Christliche Friedenskonferenz (CFK), [the Christian Peace Conference] in 1958 in Prague.

Kasner joined not only the CFR, but also the Weißensee working group, whose leader, CFK man Hanfried Müller, had top-level contacts in the SED Politburo.

When in 1961, at the height of the Cold War, the Eastern Conference of the Evangelical churches in East Germany laid down in accordance with the EKD (Evangelical Church in Germany) that Christians should not submit to the supremacy of an ideology, the Weißensee working group took up the opposing position. Its “Seven Propositions on the Freedom of the Church to Serve” elevated cooperation with the “anti-fascist State power” to the status of a Christian duty. The “Seven Propositions” can be viewed as the ideological core of the “Church within Socialism” concept. During these years, Angela Merkel’s father stood quite closely at the side of the Socialist Unity Party state.

After 1970, admittedly, Kasner increasingly distanced himself from the official line of the GDR leadership. All the same, Angela Merkel did grow up in a home where politics and theology merged and where politics was bound to the pursuit of the socialist ideal.

Angela Merkel was among the 10 per cent of her class who were permitted to study at the Erweiterte Oberschule (EOS), an extended secondary school. Unlike many other pastors' children, she was not banned from the mass organisations of the Socialist Unity State but went on to join the Young Pioneers. Later she became the Deputy Secretary of the FDJ (Free German Youth) at her school. This and the closeness of her father to the system allowed her to graduate with her Abitur, the state diploma that qualifies a school-leaver in Germany to study at a university, and she went on to study physics at the Karl-Marx University of Leipzig. Whoever got in there was assured of a career in the natural sciences – especially if one, as Angela Kasner did, took on a leadership role in the FDJ as well. Later, at the University of Leipzig, she first came into contact with reformist Communist circles.

In the autumn of 1989, when communism collapsed, [her father organised] a meeting of East German physicists in the Pastoral College on the topic of “What is Man?” The pastor would in fact have been pleased to see her join the SPD (Social Democratic Party of Germany). His once great influence over his eldest daughter had waned over the years, however, and Angela Merkel chose instead to join the newly-formed Demokratischer Aufbruch (DA), [Democratic Awakening].

Unlike the story she would have you believe, Merkel did not join the Democratic Awakening in December, when this party wrote German unification into its platform as its vision of the future, but earlier, when reunification was not on its platform. There is much to suggest that Angela Merkel originally advocated democratic socialism in a separate GDR and had not always yearned for unification. In the end, Angela Merkel, as a board member of the DA, was in the Alliance for Germany, which won the Volkskammer elections in March 1990 in the wake of Helmut Kohl.

The leader of the GDR was now Lothar de Maizière. The son of the elder Kasner’s former fellow campaigner Clemens de Maizière, he then appointed Angela Merkel deputy spokesperson of the party. Her skills were quickly recognised by the public. Through “intelligence and reliability,” wrote the Neue Deutschland, she succeeded “in building a reputation as one destined for greater things”. That assessment would prove correct. After the DA had been absorbed into the CDU, de Maizière and his State Secretary Günther Krause brought the pastor’s daughter to the attention of Helmut Kohl, who was impressed by Merkel straight away.

All in all, the book on Merkel provides new, insightful perspectives on the story of Merkel’s life in the GDR – although no groundbreaking revelations that could call for a radical revaluation of Merkel's role in the GDR. Rather, the reader will recognise from the glimpses into Merkel's “first life” the familiar traits of the coolly calculating and manoeuvring pragmatic.

Even in the GDR era Merkel appears to have been trying to work free of the taint of utopian exuberance and always firmly kept in mind her own advancement – and within existing structures, so long as they did not stand in her way. Once these lost their usefulness, with the same meticulousness she quickly found herself at home in the new structure of the Federal Republic.