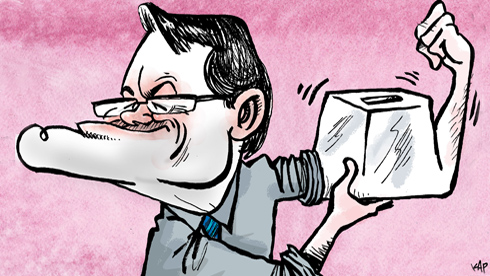 A dangerous leap into the abyss

Central to the Catalonia’s November 25 regional elections will be the question of secession from Spain, with President Artur Mas aiming for an absolute majority that would legitimise a referendum on this issue. But the vehemence of the campaign is such that events could easily spin out of control, worries author Javier Cercas.

The recent upsurge of secessionist feeling in Catalonia has me perplexed and apprehensive. I have not written about it here, because I assume the readers of this column tend to share my feelings, and why preach to the converted? Yet on the occasion of my recent novel I have been interviewed and asked questions on this point, and have said more or less the following.

I understand why some people are angry and desperate, and think that things could hardly be worse. I can only answer with a certainty and a confession. The certainty is that we could, indeed, be worse off. The confession is that I like adventures, but only in fiction. Not in politics, where I am a fierce partisan of leaden boredom, like that of Swiss or Scandinavian politics.

So when I hear our premier Mas say that the road to independence runs through "unknown terrain," my hair stands on end. Writers and scientists have an obligation to boldly go where none have gone before; but for politicians, this ought to be taboo. If in the dark unknown the writer falls into the abyss, so what? But if a politician falls into the abyss, he takes all the rest of us with him (and the abyss is the abyss of history). I don't know whether I need to add that I am not a Catalan nationalist, nor a secessionist.

Nationalism incompatible with what the left stands for

That's about it. Since I said this, I have been amazed at the number of people who have congratulated me for uttering these words. One historian who specializes in Catalonia reminded me that Pierre Vilar coined the word "unanimism" in reference to those conjunctures when fear silences all dissidence, and creates an illusory sense of unanimity, and confessed to a fear of saying in public that she did not partake of this secessionist fervor.

I was amazed that there are still holes and corners where people fail to understand that nationalism - be it of the Spanish or the regional kind - is incompatible with what the left stands for. And there are holes and corners where it is not understood that one thing is Catalan nationalism, the -ism of a few, and another thing the Catalan language, which belongs to all of us.

I am amazed at the general amazement caused by [José Manuel] Lara when he said that his publishing house, Planeta [Spain’s largest publishing house], would pack up and leave an independent Catalonia; and amazed when the leader of the secessionist party ERC [Esquerra Republicana de Catalunya, independentist left party] now says that an independent Catalonia would be bilingual, when they have always insisted that bilingualism leads to the extinction of the Catalan language.

In history nothing is impossible

I am amazed at the ingenuity of Artur Mas, who overnight has caused the Catalans to stop blaming him for their ills, and blame them all on Spain. I am amazed and appalled when a former premier of Extremadura [of the regional government] says that those originally from the southwest region now living in Catalonia ought to be sent back to Extremadura, as if we were cattle; and when the Catalan premier, whose job it is to make laws and see that they are obeyed, says he would ignore the law.

In this context, it amazes me less to see a writer almost calling for armed insurrection, or a politician [Alejo Vidal Quadras, Popular Party MEP] calling for Catalonia to be placed under the rule of the Civil Guard. But what most amazes me is when apparently reasonable people maintain that the secession of Catalonia would take place in an atmosphere of cordial good feeling and without traumas, and when almost everyone seems to believe it is impossible that the situation might degenerate into violence.

Dear God, have we not yet learned that in history nothing is impossible, and that great changes have almost always happened by means of fire and sword? Have we once again grown so senseless and pusillanimous as to be incapable of finding a civilized way out of this muddle?