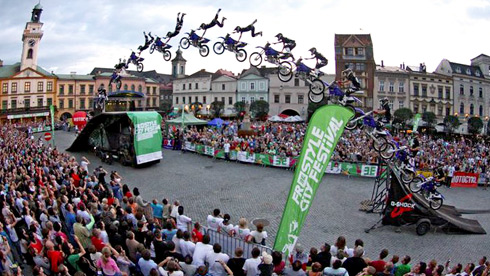 How does a city divided into two by a national border leave the problems of the past behind and come together? A group of young people from such a city, known as Cieszyn in Polish and Český Těšín in Czech, are promoting reconciliation through volunteering.

This is a freestyle story: Read it however you like

You can trace the overlapping stories of the lives of people who have given up international careers to work together to create something unique: a “university for the homeless”, a “centre for new thinking”, a “Polish-Czech volunteer bridge”.

Action, action, action! There is no shortage of action, when trying to keep up with Michał Paluch, the social trainer and freestyle leader of Cieszyn’s young people, bursting with ideas for integrating the young and old, Polish and Czech, Protestant and Catholic – and even students, teachers and public officials into a single, ecumenical, multicultural community.

This story is about the town of Cieszyn: a dual town in transition. Let’s go!

December 2012. “Okay, let’s go!” says Paluch excitedly. ‘We’re doing shadowing. You’ll be my shadow, we’ll get to know each other in action.”

A total of 2,400 Cieszyn students are about to fill a questionnaire aimed at spotting youth leaders – outstanding people able to run cross-border projects. Paluch hopes to find a hundred and set up a Polish-Czech youth parliament.

And then the two towns, each with a population of roughly 30,000, will merge to create one with a population of 60,000, in the centre of united Europe, multi-religious, multi-cultural, with a university, a beautiful history, and a promising future. The red tramway that the locals so long for, will once again connect the banks of the Olza, just as it did in after 1910.

The “little Vienna” myth will be reborn, the hansom cabs will return, an actor dressed up as Emperor Franz Joseph will stroll around the Market Square... A cross-border high school and an annual European youth festival will mark the anniversary of the start of the Schengen treaty. It is here that history was made: on December 20, 2007, united by the moment, the mayors of Cieszyn and Český Těšín sawed the border barrier in two.

However, despite their efforts, the barrier remains in people’s heads. The Poles don’t speak Czech, the Czechs don’t speak Polish. Although they live in one town, they are worlds apart.

Paluch is 31. School was a nightmare for him: “Totalism. Post-communism”. He found his freedom through journalism: a bike, a camera, a voice recorder. At the age of 17 he interviewed Richard Pipes, a US presidential adviser, and actor Jerzy Stuhr, who started work in Cieszyn in the 1970s. He visited the county governor, the politicians, the local councillors. On the day of his high school graduation exams, he won a prestigious journalism prize. [...] And then he discovered the summer school of Civil Society Leaders, founded by Zbigniew Pełczyński, a philosopher and Oxford professor emeritus.

“For the first time in my life someone asked me who I was and what I wanted to do! And who was it? Bill Clinton’s tutor!”

As part of the summer school, they went to Warsaw and visited the prime minister’s office, the president’s office, the ministries, talking to some of the most important people in the country. The course concluded with an anti-corruption workshop.

“At the end of the psychology class, the class prefect said: ‘This is our first exam. We need to buy the professor a gift’. I pulled out those leaflets. ‘Guys’, I said, ‘what you are talking about is called corruption.’

At the Cross-Border Volunteer Centre Paluch finishes writing a textbook on a new teaching method he developed while working with volunteers. It is his future PhD thesis, a failsafe blueprint for collaboration between young people and the municipal authorities. And even for co-governing.

Footage from the Freestyle City Festival, where everything began three years ago, plays on the screen. “I returned home from my studies and came up with an idea,” says Paluch. Over 300 action sports enthusiasts come to Cieszyn. Motorcycles will fly around Saint Florian’s head in the Market Square. Bikers will race down the steep, winding streets. Several dozen events will take place over four days. This project aims to unite everyone. It was a remedy for the local ailments and issues.

The 2011 and 2012 editions have produced some 120 young event managers. Paluch closes his laptop: “What was I supposed to do with them? [...] I went to the deputy mayor and said, ‘Let’s write a EU project. Let’s set up a cross-border volunteer centre!”’.

The CVC space is a modern conference facility built with EU funding. It sports a multimedia projector, a video camera, a green freestyle lectern (with a bicycle mirror and bell) for practicing public presentations and speeches, a row of laptop computers, and the usual stands and flipcharts.

Young people arrive in silence, dropping their bags on the floor, getting seated on beanbags. Przemysław Lose, 16, is an organiser of the Polish-Czech conference involving both towns. “What’s happening at the centre is absolutely unique,” he tells me. “This is not school, or culture club, or the boy scouts. This is something else entirely! And it’s changing the town.”

Petr Kantor makes you think of young Vaclav Havel. Slim, slender, focused. We are sitting at the Czech tea room in Cieszyn. Kantor, 35, who earned his degrees in drama and management in Japan, lectures at University of Ostrava. It was thanks to his contacts that Polish volunteers made freestyle “jumps” into high schools on the Czech side. They entered the schools with music, films, and workshops, advertising future meetings. Then they learned Czech.

But building a community has been an arduous process. “The Czechs are different,” Kantor says. “Not as tough as Kotański or Owsiak, or as impulsive and invasive as Michał Paluch. They operate in small groups, in their community, often at schools.”

Still, Kantor distributes leaflets at schools and searches for youth leaders to create a cross-border parliament, because this will be a milestone and a beginning of change.

There were none after the Second World War. In the 1960s, on the 1,150th anniversary of the town’s foundation, the border barriers were raised for a moment. Then they would open on important state holidays. Usually May 1.

Then came the year 1968. In a cemetery on the other side of the river, one can find the grave of Łada Krumniklowa, a Polish journalist from Český Těšín, who wrote and handed out a leaflet to the invading Polish troops: “Do not shoot at people. There is no counter-revolution here. This is an unlawful, terrible occupation of a sovereign state.”

She was arrested and spent the rest of her life working as a shop attendant, for the lowest pay. Her tomb is an important connection point.

In the early 1990s, the Polish-Czech Solidarity group created cross-border connections, the On the Border theatre festival was founded. Then came the pre-accession and post-accession funds and laborious work followed: road building, park revitalisations. Today, several annual events take place on both sides: cross-border races, basketball tournaments. The municipal library, Książnica Cieszyńska, organises oral history meetings, and its Czech counterpart, Mêstká Knihovna, arranges discussions with titles like “The Czechs and the Poles: Apart Together.” The town is growing back together. Slowly. It is just that the young people would like to see it move a little faster.