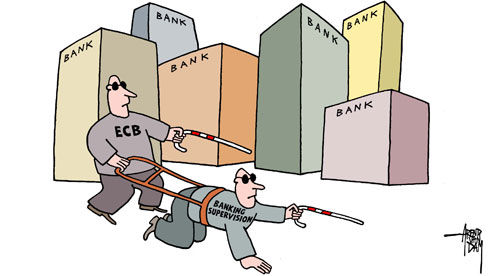 It was a good day, or rather a good night, for Europe. The banking union agreement, concluded in Brussels late on Wednesday, December 18, marks a major step forward, even if does not amount to full European integration.

A reassurance for savers and for the markets, it provides for the consolidation of a European banking sector which still has a good many lame ducks. Since the financial earthquake of 2008, Europe has lagged behind the United States, which was quicker to clean up its banks. Now it is moving in the right direction, and even more importantly, the banking union will stabilise a eurozone architecture, which the crisis has shown to be unbalanced and fragile.

With budgetary harmonisation, European solidarity funds, and perhaps the soon-to-be-implemented coordination of economic policies, the banking union will give the monetary union a material existence which has long been overdue. It also aims to break the link between banking crisis and sovereign debt, effectively preventing contagion of the kind that spread from catastrophically managed banks – in Athens, Dublin, Madrid and Cyprus – to bring sovereign states to the brink of bankruptcy, and threaten the survival of the wider eurozone.

The product of a compromise between northern and southern eurozone countries, Wednesday’s agreement, which will now have to be endorsed by EU heads of state and government and backed by a vote in the European Parliament, organises the banking union around two missions: banking supervision, and the resolution of banking crises.

The first of these chapters is the more radical and innovative of the two. Supervision, which was the responsibility of national regulators, will be entrusted to the European Central Bank (ECB). One of the Union’s best performing institutions, the ECB will now take charge of the direct supervision of some 130 credit institutions.

[[This amounts to virtually unprecedented leap forward in terms of sovereignty. And it should be welcomed as a logical necessity within a single monetary zone]]. Given the irresponsibility — and even the complete disengagement — of certain national regulators highlighted by the examples of Greece, Ireland, Spain, it is more than justified.

Marked by German hostility to anything resembling a “transfer” union in the eurozone, the chapter on the resolution of banking crises – the recapitalisation or orderly wind-up of lenders – is less innovative. There is no question of the creation of a public fund managed by one of the Union’s institutions — the Commission was mooted as a candidate – to provide direct aid to banks in difficulty.

For the most part, it will be nationally based. In each of the countries concerned, the banking sector will agree on the creation of a resolution fund. This fund will be developed progressively and will only be fully mutualised in 2026 when it is expected to be able to deploy €60bn.

A further advance in the slow recovery of the eurozone, Wednesday’s agreement will accompany Spain and Ireland in their return to financial markets . All of this remains fragile, but things are moving in the right direction.