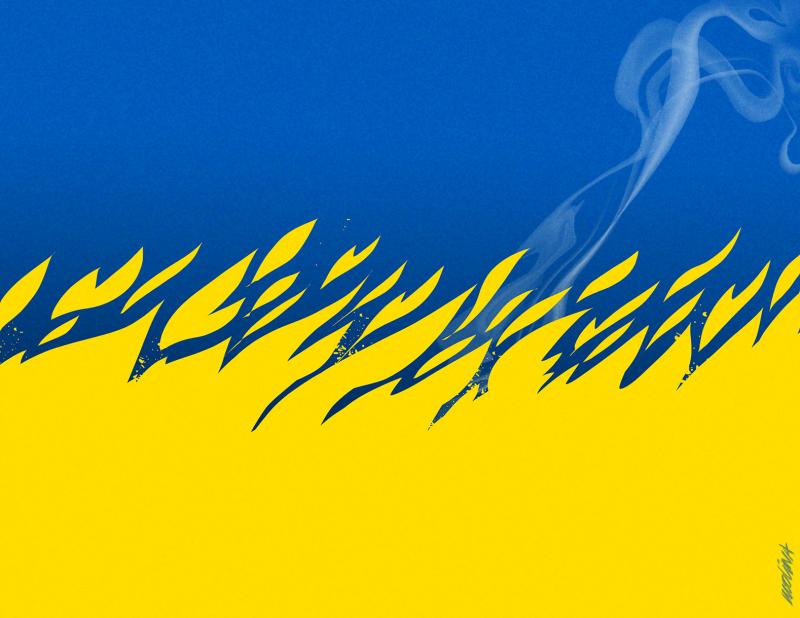 A thin line between freedom and revolt: Covid-fatigue in Ukraine

By the end of 2020 COVID-19 had claimed the lives of almost 15, 690 Ukrainians. It’s more than 13,000 people have been killed in Russian-Ukrainian war fought since 2014. Currently the country is struggling with its peak of the pandemic. Yet the government cannot dare to impose strict lockdown since public discussion is overwhelmed with economic arguments driven by political opponents. The paradox is that the more people are getting sick, the less willing they are to obey rather mild rules, claims Ukrainian journalist and author Nataliya Gumenyuk.

“If I wear a mask I’ll get tuberculosis”, a shopkeeper in a tiny grocery store in a village in central Ukraine argued with a local policeman. The officer was inspecting the premises for any breach of safety protocol. The shopkeeper could face a fine of up to 500 euro – a lot of money in the Ukrainian countryside. Since there were no cases of Covid-19 in the area (as a local doctor confirmed), the young officer decided a warning would suffice.

Wearing masks indoors and inside public transport has been mandatory in Ukraine since March. Towards the end of summer I was wrapping up a documentary on how Ukrainian essential workers were handling the pandemic. The local policeman was one of the protagonists. The atmosphere felt extremely different from the early days of quarantine in spring, when villagers were frightened by a “foreign disease” and preferred to stay home.

Yet the longer the pandemic lasts, and as cases mount, the more people seem inclined to continue with their everyday lives, including in the capital.

An overabundance of Covid-info seemed to lead citizens to start ignoring the news. Even I muted the specially created Telegram channel run by the Health Ministry, which was extremely popular when it was launched. Working with Ukranian public broadcasters, I mentioned how colleagues were struggling to come up with “another Covid-story”. The quarantine had become the new normal; and its impact on Ukrainians stopped being news a long time ago.

Meanwhile, the crane operator I had filmed had been fired. She had protested against the fact that her employer – who had a monopoly on construction work in the provincial town – had lowered wages during quarantine. Adding to her misfortune, her only son wasn’t allowed to travel to Poland for lucrative seasonal work. According to OCHA, Ukraine may face the worst recession in decades due to the coronavirus.

Research conducted by my team in the beginning of the pandemic found that Ukrainians who had already survived many crises were treating it as a crisis of the same nature. Financial problems and job losses due to lockdowns were a major concern for many. Economic concerns rapidly overwhelmed the political discourse.

Between Populism and Public Opinion

A major problem for the current Ukrainian government is its vulnerability to criticism. Prior to his election, Ukrainian president Volodymyr Zelensky was the most popular celebrity and comedian in the country. Public support translated into winning a parliamentary majority with his party, Servant of The People. Zelensky’s popularity is also the major (though not only) leverage for a political outsider who promised to confront large financial interests controlling the economy, but ended up caught in a hostile media landscape controlled by those same financial interests. Still Zelensky remains the most popular politician in the country, far ahead of his opponents.

The government’s communication strategy is to demonstrate willingness to listen to the people and tailor actions to the polls – some consider it populism, others, real democracy for a post-authoritarian society. While Ukrainian central authorities showed strength during the first two months of the pandemic, with every month that followed they loosened restrictions or at least eased their enforcement. The real spike started in the middle of Autumn – when COVID-fatigue was also at its height.

On 26 October the first round of local elections was taking place. Volodymyr Zelensky had won the presidential elections in a landslide in April 2019, while his newly created party Servant of The People won a majority three months months later. The local elections would be a test of his public support. Zelensky had no allies in any of the regional capitals. The mayors decided to rebel by playing the anti-lockdown card.

One by one, incumbents all over the country started countering the decrees of the central government, proclaiming the restriction unconstitutional (at least partly true). Various opposition parties made accusations of ‘poor handling of the pandemic’ part of their campaign.

This much is true: the time that Ukraine could have spent strengthening it’s healthcare system during months of strict lockdown were wasted. While the basics like masks and tests are there, hospitals all over the country do not have enough oxygen-stations or ventilators, provided guidelines are contradictory, and by the end of Autumn hospitals were almost full. The financial stimulus provided to small businesses is far from feasible (€270), though at least higher than the minimum wage (€150 per month).

“Like Italy”, “chaos”, “catastrophe”  –  regular headlines in the Ukrainian press, to such an extent that we all grew accustomed to it. Still, from within the Ukrainian media bubble the situation seems worse than anywhere in the world. Highlighting how “divided the country is”, including over COVID-19, self-pity is something which unites pundits from across the political spectrum. It all feels very different when put into an international perspective, especially if you look at the divide along party-lines.

“Wearing masks has become a political issue here in the US'', the editor-in-chief of a major US magazine warned me when I arrived to report on the US election this October. In contrast to the Ukrainian capital, in Washington DC – which later voted overwhelmingly for Biden – the majority of people wore masks even outside, restaurants strictly limited occupants, and many shops remained closed. When approaching Trump’s opponents I struggled to obtain in-person meetings to film. One well-known columnist even told me that requests for such meetings were unethical.

I witnessed a totally different scene in Republican-leaning rural Wisconsin. “You don’t need the mask here, take it away” – the owner of the sports shop packed with firearms told me. He complained loudly about “stupid, socialist restrictions” killing the economy. An old lady with the Trump sign on her door welcomed me – a total stranger – inside her house where her husband was in a wheelchair and looked obviously sick. The family didn’t fear corona any more than the regular flu.

What impressed me the deepest, however, were the Trump rallies in Florida. The first had been attended by almost 30,000 people, most of whom wore no mask. “If COVID-19 existed, half of Mexico or India would be dead since those people live in slums”, was one of the comments. Yet the strongest and most popular  argument against safety measures was the fact that the masks, along with the restrictions, were signs of oppression, and people living in the land of the free should not be the slaves of their government.

Coming back home after almost a month in the US, it felt that COVID had finally hit Ukraine: everybody knew somebody who was either sick or dead, which was not the case before.

In some places the next round of local elections were still ongoing. In the end, the president’s party candidates didn’t win in any of the large towns or regional capitals, though they still gained a majority in local councils. The government imposed a so-called “weekend quarantine” – restaurants, shopping malls, cinemas would not open on Saturdays and Sundays. However, under public pressure, this quarantine was cancelled after only one week. Fearing uproar, the prime-minister didn't dare introduce strict regulations before Orthodox Christmas celebrations on 7 January.

The mayoral candidate in Lviv, a major tourist spot, formally declared Saturdays and Sundays working days. Some shops in the capital took his cue and decided to call Saturday an “extended Friday”. Curiously, such ideas were even popular among the so-called democratic pundits – anti-corruption activists, human rights defenders, famous independent journalists, all united in their scorn for the president, and with justification: the government has no right to oppress freeminded Ukrainians, or destroy their livelihood.

Contrary to the US, and fortunately for Ukraine, there is no clear party line defining covid-deniers, even if the various sides may differ when it comes to enforcing lockdowns and restrictions.

The anti-vaccines movement as a new threat

There are other reasons why COVID-driven polarisation may become more serious. Ukraine has the lowest vaccination rates in both Europe and the world, according to the WHO.

With the proliferation of conspiratorial thinking, Facebook has become an important source for information, and Ukrainians historically have little trust in government. At the same time, the only clear government strategy to contain COVID is to wait until a vaccine is developed. State officials have been chasing major pharmaceutical companies, but being one of the poorest countries in Europe, Ukraine may have a long wait in store. The absence of any clear communication suggests authorities are taking the population’s submissiveness for granted. According to a recent poll 40% of Ukrainians are not prepared to take a vaccine even if it’s free. Unfortunately, this study does not offer reasons for such reluctance.

Apart from conspiracy theories (involving Bill Gates, George Soros, etc), there is also a major risk that Ukraine becomes the battlefield in a global vaccine race between the West and Russia. On national television, Russia is already waging an aggressive campaign promoting Sputnik V while dismissing the vaccines made in the UK and US. In recent months the same narrative has prevailed on the talk shows owned by pro-Russian politicians in Ukraine. While neighbouring Russia has started vaccination and is ready to share with allies like Serbia, the Pfizer/BioNTech vaccines are still beyond reach.

Ukraine may end up with an ethical dilemma: in the absence of any resolution to the war with Russia, it may never be able to receive the Russian vaccine. Up to 5 million Ukranianians live in annexed Crimea and Russia-controlled Donbass. Pro-Kremlin forces could easily accuse the Ukrainian authorities of their own “Chernobyl moment'', for denying their people even theoretical salvation for political reasons.

By December, Ukraine had lost more than 15,590 lives, more than were killed during six years of conflict with Russia. Compared to the war, the coronavirus is a far less polarising issue, yet this divide could still spell trouble for a country forced to wage too many battles at once.