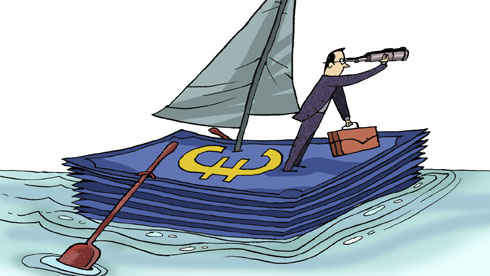 After 14 hours of talks, EU finance ministers agreed a system of bank supervision. The project covers only a small number of firms, but it marks a step towards an end to the crisis, says the European press.

"Europe will finally regulate its banks," French dailyLe Monde says following an agreement signed by EU finance ministers in the early hours of December 13. "A unanimous and historic agreement on bank supervision starting in 2014." The document allows for direct regulation by the European Central Bank "of establishments that have assets of over €30bn or which represent over 20 per cent of the GDP of the country in which they originated or which benefit from European aid," Le Monde explains. The measures apply to 150 to 200 banks, out of 6,000, in the EU.

In its leader article, Le Monde hails, "The banking union's great leap forward, which is aimed at preventing not war, but the death of the euro." The paper also explains how the banking union was forged:

When the Spanish banks were threatened with going under, in the spring of 2012, the idea of a banking union emerged. To save themselves, those Europeans spared by the crisis would have to directly bailout those firms in bankruptcy. The Germans rightly demanded that credit institutions first be regulated by the ECB. This first stage has just been accomplished. Regulation is but a first requirement and must be accompanied by a European mechanism for crisis management and bailouts. A European deposit insurance scheme would be the banking union's crowning achievement. This is desirable but was rejected by Berlin. It is still far away, as far away as a federal Union.

The BBC's Europe Editor, Gavin Hewitt, says the deal is a “further example of how the Euro zone crisis is carving out a new Europe, less from choice but more by the need to survive. The direction of travel is causing unease - and not just in Britain.” In Germany, financial daily Handelsblattsees the agreement as "very good news", especially for citizens in the eurozone –

It is high time to remove national regulatory authorities. They were often under the influence of politicians who insisted on keeping a protective hand on their banks and thus prevented much-needed corrective measures. Spain is one example. So is Cyprus. German taxpayers can also rejoice. The failure of German bank regulators cost them more than the Greek bailout. Hopefully the European Central Bank will do better. It would be difficult to do worse.

Little is left of the ambition of leading Europe towards a true banking union, *mourns Portugese financial daily DiárioEconómico*. For the paper –

Over the year, the leaders of the EU depicted the idea of a banking union as a systemic response to the euro crisis. It was to be the kernel of a new political and economic union in Europe. A few months later, the problem still exists. But, the sense of urgency has disappeared, the enthusiasm also. The application, in dribs and drabs of what seemed a good idea on paper, will not resolve the crisis. But it will weaken banking regulation, at least in the short term.

Spanish daily El Paíssays the banking union accord is "full of technicalities but in effect it is always the same old story: who holds the power?" And the answer is clear: Germany. After having succeeded in removing local banks from the jurisdiction of the single regulator,

Germany also imposed a watered-down solution for the common deposit insurance fund (which consists of just standardising national funds) and a considerable delay for the resolution fund (a mechanism to close banks if necessary), at one time a back-door way of sharing the euro's problems. And the schedule of many other issues was delayed despite the advice of Italy, of France and especially of Spain, the most financially exposed country.