European poll on TTIP
Dortmund (Germany), 2 May 2014. A popular flashmob against TTIP during the speech of European Parliament president Martin Schulz 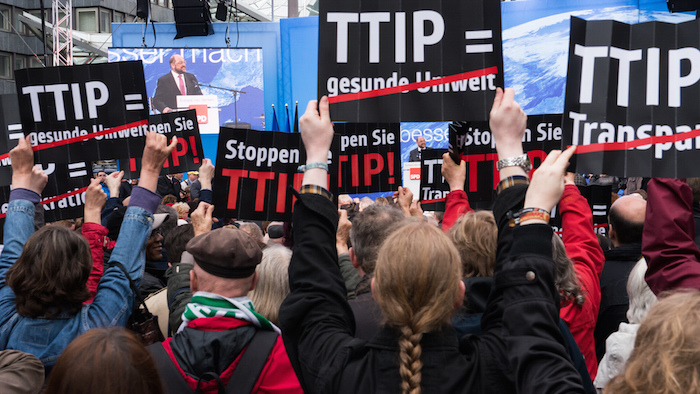 An overwhelming majority against arbitrage courts

campact  | Dortmund (Germany), 2 May 2014. A popular flashmob against TTIP during the speech of European Parliament president Martin Schulz

The European Commission has received 149,399 responses to its public consultation, published on 15 January, on the Investor-state dispute settlement (ISDS) mechanism, which is contained in the Transatlantic Trade and Investment Partnership (TTIP). But “nearly none of them was in favor of ISDS,” reports the Frankfurter Allgemeine Zeitung.

Thirty-five per cent of the total responses came from the United Kingdom, 23 per cent from Austria and 22 per cent from Germany. There was next to no participation in the eastern European states. According to the Commission, 97 per cent of all responses were mass replies forwarded by non-governmental organisations. The paper writes —

This though is not the end of the free trade agreement with the United States, according to trade commissioner Cecilia Malström. The consultation was not meant to be a referendum, sources close to the Swedish commissioner said. “We now need an open Discussion on the basis of the consultation,” she said in Strasbourg.

The paper stresses that Malström did not put forward concrete proposals to fix ISDS but only said the commission would work on several issues, such as “making sure TTIP does not restrict rights of states in terms of protection of the environment and of consumers”.

Frankfurter Allgemeine Zeitung adds that new discussions with the European Parliament, the member states and interest groups such as unions, consumer advocates and representatives of corporations further diminish hopes of a fundamental agreement on TTIP before the end of the year.