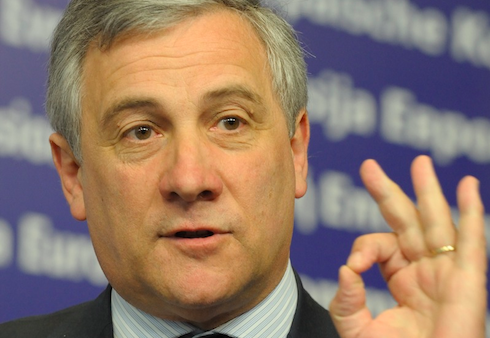 Antonio Tajani is European Commissioner for Industry, a sector that has been hit hard by the crisis, and one which several member states are hoping will play a central role in their recovery. On the sidelines of the International Journalism Festival in Perugia, Italy, he told us about the EU’s recipe for economic recovery, the crisis affecting the Union’s relationship with its citizens, and his vision for the future of Europe.

Mr Tajani, the crisis is ongoing in Europe and unemployment has reached record levels in several countries. Numerous experts have highlighted the issue of the competitivity of companies, which remains problematic in most EU states, with the notable exception of Germany, as well as the weakness of internal demand. How should these difficulties be addressed?

With policies that enable companies to relaunch production. First and foremost, this will entail a simplification of access to credit and payments that are owed to companies. That is why the Commission is proposing a new directive on late payments, which has already been adopted by 18 member states.

This directive, as well as a flexible interpretation of the Stability and Growth Pact, which will facilitate the reimbursement of debts owed by the public administration and should put a further €180bn in circulation in Europe, that will dynamize the positive feedback loop of production and consumption.

We will also have to give new powers to the European Central Bank (ECB), so that it can play the same role as the American Federal Reserve. Its President, Mario Draghi, is in tune with arguments on this wavelength, and wants an ECB that can govern the common currency in a manner that is in the interest of citizens.

The variation in pay scales in Europe has added to differences in the competitivity of companies in different EU states. Some have argued that it is even undermining competition within the EU. Is Europe planning to intervene to promote greater harmonisation?

Competitivity is not threatened by a variation in pay scales between different EU states: the problem is one of fiscal pressure on companies, which is excessive in some countries. And this is where we can intervene: by obliging national governments to reduce this pressure, and ensuring that companies are paid, and that they have easy access to credit. At the end of the day, this will result in better conditions for all workers.

2012 was a bad year for the European car industry, and 2013 is shaping up to be similar for a majority of players, with the notable exception of the Volkswagen group. What is the EU doing about this?

We have launched a three-point action plan: firstly, we have doubled funding for car industry research and innovation in the next EU budget. Secondly, we are implementing a “non-naive” trade policy for the sector, that is to say one that protects car industry interests but within the framework of trade agreements. Thirdly, we have simplified existing regulations, and new rules and proposals will only be drafted in response to exceptional developments, for example in the field of road safety. The goal is ensure that we do not add to the burden of technical and financial standards weighing on entrepreneurs.

Does it make sense to provide support for the car industry, at a time when more and more cities are hoping to reduce the number of cars in their streets?

What does not make sense is wanting to cut down on car production. It has to be done in an intelligent manner: the doubling of funding for research and innovation is only for "greener" cars, which run on hydrogen and electricity, or feature other less-polluting technologies.

According to forecasts, there will be 2.5bn vehicles in the world in 2050, as opposed to 1.7bn today. There is therefore room for exports and internationalisation. For example, the good results of Fiat plants in Brazil have enabled the brand to keep its operations going in Italy.

When are these proposals going to be examined by the European Council?

The council meeting on competitiveness is planned for the end of June. Then there is a meeting on industry slated for the beginning of the year, which will be more focused on manufacturing. Then there will be a third one that is more oriented towards defence, which should take place before the end of this year. For years, industry has been set aside by political leaders obsessed with finance, now Europe is making industry a central priority for the economy. Manufacturing is supposed to account 20 per cent of the EU’s economic activity by 2020. As it stands, the average for EU states is 16 per cent.

The de-industrialisation that began in Europe in the 1980s has been identified as one of the causes of the economic crisis. Are we aiming to reverse this trend?

De-industrialisation was a big mistake. We need a more modern and a more competitive industry. For that, we will need a third industrial revolution: after coal and oil, the time has come for a revolution based on green energy, energy saving, and key-enabling technologies, specifically bio- and nano-technologies, that will enable our industry to attain a global level of excellence.

Can you tell us about collaboration on this initiative with your colleagues in the Commission? For example with the commissioners for the environment and research.

The Commissioner for the Environment, Ms Hedegaard, and I are very much on the same wavelength. The reduction of CO2 emissions is a positive goal, as long as it not allowed to become counterproductive. I believe the 2020 target of a 20 per cent reduction [in emissions from their level in 1990] is a valid one, but I do not believe that this objective should be increased as some people have suggested. A higher target would result in higher costs for European companies, which would then consider terminating their operations in Europe. Not only would this result in job losses, but it would also amount to a setback in the fight against global warming: because those companies would simply transfer polluting activities to other countries with more flexible legislation on CO2 emissions.

The latest Eurobarometer survey has highlighted a worrying decline in EU citizens’ confidence in European institutions. What can be done to combat this disaffection?

The disaffection has been caused by the economic crisis, in which Europe has been perceived as a political force that is demanding sacrifices. We have to reverse this trend and also take stock of the election results in several European countries, where Euroscepticism and a mistrust of the euro have now emerged. To this end, policy must be changed so that it is more focused on growth and the development of the real economy. As Commission President José Manuel Barroso has recently pointed out, we should stop insisting on sacrifices and do more for industry, companies and the internal market. Austerity can only be useful if it is accompanied by measures to provide support for growth.

On this point, do you believe that the communication from the Commission has been satisfactory?

More could be done, especially with regard to explaining what we do. As for myself, I do a lot of traveling because I believe that is important to communicate on our work. For example, this year we have launched an initiative to organise encounters between the EU and its citizens, with meetings in public squares and town halls etc.

Will you be a candidate in next year’s European elections?

I do not think so, but I am counting on completing my mandate [which ends in October 2014].

What do you think of the proposal launched by several European politicians and intellectuals, and taken up by the Progressive Alliance of Socialists and Democrats, that parliamentary groups should put their candidate for the European Commission presidency at the head of their electoral list?

I am in favour of the principle that the European Commission president should be elected by Europe’s citizens. Barroso’s reappointment in the wake of the conservative European People’s Party victory [PPE] in 2009 European elections was a step in this direction, which responded to some extent to the demand for more democracy in the management of European institutions.

Who will be the PPE candidate?

The party has yet to discuss the question of a candidate. That will be raised next year.

The European Union has entered a critical period in which it is faced with conflicting demands as well as a resurgence of Euroscepticism and isolationism in several member states. How do you view the future of the EU?

I think we should continue to forge ahead. Piecemeal measures will not serve any purpose. We should set our sights on a United States of Europe. If we do not, we will remain stuck in the middle of the ford where we run the risk of being swept away by the current. It is transition that will take time: it took the Americans a century to achieve, and they had to go through a civil war, even though they faced perhaps fewer obstacles than we do. These are difficult times for Europe, but 20 years ago, who would have thought that we would have a single currency? We have to be determined and confident, because we cannot expect to have any global impact acting alone. It is a goal that will not be achieved overnight, but I hope that in my lifetime we will see a United States of Europe.