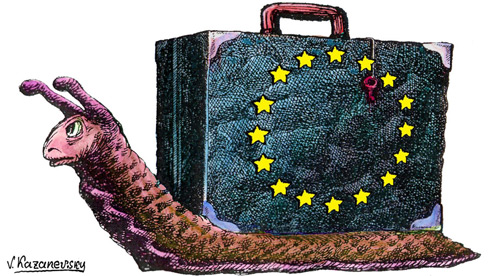 At the end of the EU obstacle course

The news has been confirmed: after more than 10 years of negotiations, the Croats are set to join the EU on July 1. Convinced that they had been burned by previous enlargements, the EU’s 27 members were even more strict with Zagreb than they were with other countries which recently joined the Union.

More than 20 years ago, Germany was the first of the European Union’s member states [there were only 12 at the time] to recognise the Croatian independence. Berlin even threatened to do so unilaterally, if the EU was unable to reach a consensus. However, today Germany is among the last, if not the last, of the EU states to ratify the Treaty of Accession 2011, which will validate Croatia’s entry into the EU.

This is not the end of a love story between Germany and Croatia, nor is it revenge for our World Cup quarter-final victory in 1998. Germany is currently at the head of a group of states that are sceptical about future enlargement, because the government in Berlin is unhappy about the situation in certain countries that have recently joined the Union.

With support from the Netherlands, Denmark and Finland, it takes the view that, for political reasons, the EU can no longer afford to overlook the rules for the basic functioning of the Union, that is to say: the rule of law and the drive to fight corruption and organised crime. For this group of states, there can be no compromise on respect for either of these. Germany has even proposed to subject all of the countries of the Union, whether they be recent or long standing members, to supervision from Brussels, which will have the option of imposing sanctions in the form of denial of access to certain funds.

The group of states that have banded with Germany view the enlargement of the EU as one of the most important events in the history of Europe. Denmark and Finland, who both joined the EU through enlargement, believe that the process has marked by number of errors. In short, it appears that some countries that joined the union were not entirely ready. In the run up to its accession, even the European Commission believed that Greece did not fulfill all of the necessary conditions for candidate status. But in view of the Cold War and for other political reasons, the door was held open.

Sometime later, Cyprus succeeded in entering the EU, even though it did not, and still does not, exercise control over all of its territory. At the time, Greece threatened to veto the accession of nine other countries if Cyprus was not included in the group. As for Romania and Bulgaria, a full six years after their accession, both countries still do not fulfill all of the required conditions, and are subject to special supervision from Brussels. When they joined, political considerations were viewed as more important than the technical conditions for accession.

The EU has learned its ‘lesson’

In the Balkans, the states of the former Yugoslavia, and also Albania, interpreted the accession of Bulgaria and Romania as an encouraging sign. The reasoning was: “If they have been given a green light to join the Union, we will also be offered an opportunity for rapid accession.” At least, so they hoped, but the EU had learned its lesson, and the conclusion in Brussels was: “Once bitten twice shy.”

Croatia, which was subjected to stricter accession criteria, became the first country to suffer the consequences of this “lesson”. This explains why the accession process took 10 years to complete. If the same criteria had been previously applied, certain member states would have been unable to enter the EU.

If the latest EU monitoring report is to be believed, Croatia is now ready, and the European Union is preparing to make use of the example of Croatia to restore faith in the credibility of the enlargement process.

Zagreb is not ready

Süddeutsche Zeitung has some sceptical words to say about the European Commission’s report on Croatian accession. The Bavarian daily draws attention to outstanding political and economic issues, which it insists Brussels has chosen to ignore —

Reading the report, you would think you were in another world: its 15 pages make no mention of the botched reforms and the economic crisis that has ravaged the EU for years. All of this has been swept aside to allow the EU to give carte blanche to the accession of Croatia […]
The truth is that, like Greece, Croatia remains marked by clientelist politics, a fragmented administration, a bloated public sector, a justice system that is still dysfunctional in the wake of ineffectual reforms, and a backward economy that is not ready for the EU. This is quite clear from the reports prepared by the IMF, the World Bank Transparency International and the United Nations. However, the European Commission is apparently unaware of all of this.