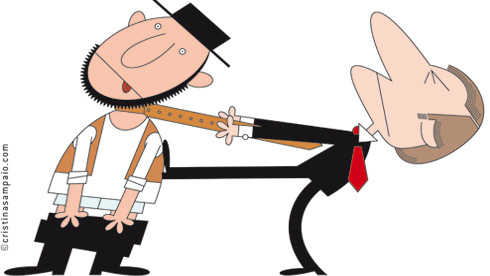 Austerity may pave the way for true reforms

The Portuguese Constitutional Court's rejection of some proposed austerity measures is the latest setback for Portugal's government. However, this is an opportunity truly to reform the state and end the current impasse, believes a Portuguese newspaper editor.

No resignation, no early elections, no tax hike. Very well. Cuts in spending. The president of the republic supports them. And the Constitutional Court has opened the door to definitive wage parity between public and private employees. When it’s all added up, what more could Prime Minister Pedro Passos Coelho do than what he always wanted to do?

Passos Coelho has learned the lesson. He has managed the reaction. After a bit of a show, he has laid the responsibility at the door of the Constitutional Court. Now, in a tour of force of political sleight-of-hand, he is getting ready to leap through the windows that were opened before the door was slammed shut. It’s a chance to implement a policy for the state that never made it through before.

Passos Coelho wanted the adjustment programme to be the way to reform the state and to create institutions for a more modern society, in a culture that encouraged competition and an economy that offered equal rights and opportunities. He failed because he never tried to do it. Instead of going forward, he placed his faith in going back – to the markets.

We still do not know what reforms the government has in mind for the state. We do know that we need to prune public spending for good. But the aim to cut €2.5bn in 2014, out of a total of €4bn in cuts between now and 2015, has become politically and socially impossible. Would it have been feasible if it had not been rejected by the Constitutional Court?

The country that shied away from higher taxes also shied away from cuts in public spending when it grasped that this would amount to lower salaries and pensions. This is the right way to go, though, and it always has been. But it is just the journey, not the destination. Heading down this road will probably mean closing hospitals, cutting subsidies, firing teachers, and shutting down public companies. Part of this road should already have been travelled a long time ago. Two years after the request for outside intervention, families and companies have adapted – but not the state.

There will be demands to bring greater flexibility to the deficit and to renegotiate the public debt. The austerity that has been announced will increase poverty through social cuts and unemployment by boosting the numbers of public officials who lose their jobs. And so, once more, the new austerity does not replace the previous austerity; it piles it on. Cutting state spending solves only a part of the problem – namely, the building of a better state – a political system free of corruption and with stronger institutions, ensuring a society with goals that can be believed in.

Mr Passos Coelho has no other choice. Will this decision of the Constitutional Court and the departure of Miguel Relvas from government turn a new page, or should we tear up the book?

Here’s where the Socialist Party [the main opposition party, which filed a no-confidence motion against the Government on April 3] (3629611) enters the picture. Politically, the country is polarised, with the right to one side, the left to the other, and the centre ground temporarily vacated. The bridges have been blown. If this rupture persists, the government that did not fall on April 7 will not last until October 15. The deficit balancing act can be handled for this year. But with the 2014 budget, it will impossible to bend it without breaking it. The country cannot reform itself that easily without the left and right meeting in the middle – and so long as Mr Passos Coelho and António José Seguro [the leader of the PS] do nothing to take down the wall they have built up between them.

The ruling delivered by the Portuguese Constitutional Court on April 5 has been the subject of much comment in the Spanish press. El Mundo remarks that the decision —

has led our neighbour to the brink of disaster and created a conflict that could be damaging to Europe and especially to Spain. First and foremost, the controversial decision […] has fanned the flames of crisis which could have negative repercussions on financial markets and risk premiums for Europe’s peripheral economies, particularly for Spain. Secondly, it has created a dangerous precedent, especially in a context where our Constitutional Court has also been called on to examine the compliance of [austerity] measures. […] Let’s hope that our judges do not make the same mistake as our neighbours.

For rival daily El País, the very principle of austerity policies in the countries of southern Europe has been thrown into question —

… by budgetary engineering difficulties implied [by the court decision], and political and social tensions, which are once again taking centre stage in a country that has literally been decimated. Let’s not forget that in the drive to generate more state revenue, Portuguese taxpayers have already been subjected to the biggest tax hikes in history. [...] Now a precedent that calls into question the political legitimacy of these absurd targets has been established. The clean-up of public finances is absolutely necessary to ensure sustained growth and viable monetary union, but pushing through measures over an excessively short period at a time of profound recession is clearly a provocation that could severely undermine social stability and support for European institutions.