Report Italy
Beppe Grillo, as the Devil, among a host of caricatured Italian political leaders during last week’s Viareggio Carnival parade in Tuscany 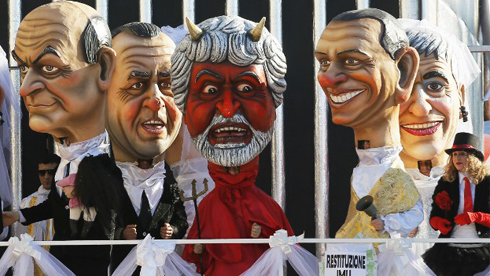 Just a few days ahead of the February 24 and 25 elections, the Italian media are ignoring the success of the former comic and self-declared populist. However, according to the polls, Grillo and Berlusconi could give rise to an unprecedented coalition of anti-Europeans.

Beppe Grillo, as the Devil, among a host of caricatured Italian political leaders during last week’s Viareggio Carnival parade in Tuscany

Interviewed a few days ago on a popular TV show, outgoing prime minister Mario Monti admitted he did not know how to use Twitter, or what Fifty Shades of Grey referred to, while carefully avoiding talk of civil partnerships, and passing quickly over the San Remo Song Festival.

At the same time, the former comedian and founder of the Five Star Movement (M5S) Beppe Grillo was haranguing a crowd in Marghera near Venice. In the crowd were ordinary people, embodying the problems and anxieties of everyday life: work, childcare, motherhood, the difficulties SME owners face. Wrapped up in hats and coats, they stood there in the cold, in great numbers, from the afternoon into the evening, listening to Grillo and others who came out onto the platform.

And yet the next day neither La Repubblica nor Corriere della Sera devoted a single line to Beppe Grillo. As if he does not exist. But they'll get a rude awakening. [Since then, the two most widely read newspapers in Italy have devoted several articles to the candidate's breakthrough in the polls.]

Something is going on in Italy. Is this movement good or bad? Of course, we can discuss that. But either way it is a major phenomenon. The Five Star Movement is standing at 17 per cent in the polls, a figure that very few parties in Italy have been able to get past.

“We will open up Parliament like a can of tuna,” Grillo declares. And the crowd goes wild. “The era of representation is finished. We no longer believe in it. We will break the bank. And if not today, then a year from now. It's just a matter of time. And really, we may just get there today.” Beppe Grillo never stops. “Populists? Yes, we are populist - and let them hear it!” And the crowd chants aloud: “Po-pu-li-sti!”

The "Tsunami Tour", as he has named it, recalls old-fashioned politics, but also the kind adopted by a certain Barack Obama - who knows how to use Twitter (and how!). And who certainly knows about the existence of Fifty Shades of Grey, if he has not already read it. Because it is obvious that as long as you do not come down to the street, you do not exist, and you have no credibility.

During his meetings, Beppe Grillo often mentions the foreign television crews that have come to follow his campaign. From all around the world, from Denmark to Canada. Journalism, after all, is not limited to analysis and interpretation; it is also a story, a narrative. If a foreigner were to flip open La Repubblica or the Corriere della Sera, he would learn nothing of what has happened during this election campaign. He would be unable to get any idea of the state of mind of the Italians and of the two questions that worry the country: who will vote for the Five Star Movement, and who shudders at the mere thought of it?

The media who think of themselves as the benchmark treat Beppe Grillo like a little dictator. The Five Star Movement only makes the news when someone in it rebels against its leader, or when there is something to spill about the “guru” Gianroberto Casaleggio, co-founder of the movement with Beppe Grillo. As if all those people, all those Italians who braved the cold to gather in the street on a weekday, were lobotomised second-class citizens. One may wonder how a comedian is proving so successful. To write about it may even be a duty. In any case, the movement cannot be ignored.

A place in government?

For the rest, it's enough to look at the polls. Published on February 6, the latest survey of voter intentions for the senatorial elections from [pollster] SWG (Studi e Proiezioni Elettorali) gives the centre-left coalition 34.4 per cent (the Democratic Party 29.6 per cent), and the Monti coalition 11.5 per cent. On polling day, it may happen that Monti and his allies fail to get past 10 per cent. That would mean the centre-left and Monti together would fall short of 45 per cent threshold.

The same number can be arrived at by adding the 28.7 per cent of the centre-right (the People of Freedom is at 19 per cent) and the 17.5 per cent of Beppe Grillo (18 per cent for the Chamber of Deputies). If we look just at the numbers, the Berlusconi-Grillo tandem (46.2 per cent), as hypothetical and unimaginable as it may be, is rallying more votes across the country today than the Bersani-Monti duo (45.8 per cent). And yet the newspapers are talking only about the latter.

To state things clearly, in the very unlikely event that Beppe Grillo and Silvio Berlusconi were to forge an alliance, it would be difficult for the head of state not to ask one of the two men to form the government.

An Italy split in half

Worrying figures? Fantasy scenarios? Yet these are real numbers. And more than numbers, they represent minds, hearts, people, and families. There are two Italies. One that we could briefly be described as European - responsible, credible, but given to procrastinating and getting lost in squabbles and unnecessary debate. And one that is difficult to identify. Because Beppe Grillo and Silvio Berlusconi are not alike, even if they do have some things in common.

Italians who will vote for Bersani or Monti are as numerous as those who will vote for Beppe Grillo or Berlusconi. And the elections are only 17 days off! This is the reality. Let us act. Something is going on in Italy. Something strong. Something intense. And that has nothing to do with the little dog of Mario Monti. Notify the Twitter stars. And perhaps even the political leaders, can yet turn things around.