Berlusconi: Our icon, your cliché

The European and international press are watching Italy and her controversial head of state with a mix of curiosity, condescension and astonishment that Italians have a hard time stomaching. Whether devoted or hostile to Il Cavaliere, at bottom they feel misunderstood abroad.

If you have been reading the leading foreign papers in recent weeks, you cannot help feeling they don’t quite succeed in objectively understanding – and therefore accurately conveying – our country to their readership. More often than not, their approach to Italy reflects a mix of folklore and superficiality, a thinly-veiled superiority and shoddy analysis, moralism and inattentiveness, the old contempt for les Italiens/the Italians/los Italianos and a show of aristocratic offhandedness.

But they never come out and explain that Berlusconi is in power by dint of his enormous media clout and a conflict of interest, to be sure, but also and above all because he safeguards and represents the real, concrete interests of various strata of the Italian electorate, not to mention the fact that there is no political alternative capable of proposing a different and more convincing idea of Italy.

Whoever opposes me is anti-Italian

This situation is breeding an alliance between the anti-Italianism of foreign commentators and the elitism of part of the Italian intelligentsia, who love their country even while rejecting it because they wish it were different from what it is. The latter only like Italians in small numbers, provided they constitute a refined and enlightened minority that sway – to the rhythm of humorist Giorgio Gaber’s song “I don’t feel Italian, but fortunately, or unfortunately, I am” – back and forth between nostalgic opportunism and a cultivated indifference to party politics.

No-one knows if Berlusconi’s decline has begun, but if it has, it will definitely be a slow process full of pitfalls. Witness the populist syllogism enunciated by il Cavaliere himself: “Italy is with me, so those against me are anti-Italian; those who bad-mouth Berlusconi are bad-mouthing Italy.” Or another one: “Foreign newspapers jeer at Italy, but the country’s democracy, its productive wealth and the president of the Council are as one: take it or leave it.”

On closer scrutiny, it is a deep-seated and long-standing anti-Italian sentiment that fuels the anti-Berlusconism in the foreign press. With all his machinations, the Council president does all he can not to refute them, and that is all the foreign pundits could ask for: some work the bull, others wield the foil, still others hunt the fox, depending on their national sport, but Italy remains the prey. That may seem odd, but there is another factor at work here: envy of a country that manages to pull through in spite of all.

Look back on the past fifty years of European history and you will notice that some simple and inexplicable things have come to pass: Italy is the world’s seventh-greatest economic power, even though it lost a war and endured twenty years of dictatorship; during that same period, France and England saw their age-old empires crumble, along with their dreams of glory and the hankerings that fuelled their world politics – not to mention Spain, which lost its empire three centuries ago and still does not seem to have realised it, despite the real estate crash.

Something has eluded foreign observers: between Berlusconi’s Italy crying media-judiciary coup and its opponents’ Italy crying autocratic regime, the majority of the country is at once indignant at seeing their nation the laughing stock of international public opinion and sceptical about the government’s arguments. Anti-Italianism is nothing new: apparently, the crisis of the nation-state has not put a damper on centuries-old ethnic stereotypes, which keep us just sitting and glaring at one another. While there are European political maps, there are also mental, psychological and anthropological maps whose borders, invisible but hard and fast, have been drawn by stereotypes and age-old rivalries that have never subsided.

Can no longer run the country 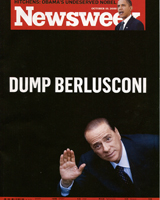 In the wake of this summer’s sex scandals and his recent judicial setbacks – now that the Constitutional Court has revoked his immunity to prosecution – as well as his attempts to gag the press, several foreign papers have called for Silvio Berlusconi to step down. The head of state’s tawdry reputation abroad, aggravated by his gaffes and off-colour jokes, is considered harmful for the credibility of Italy as a whole. Most recently Newsweek ran a piece on Berlusconi evoking Italian excesses of the past: “One thinks of Nero, or the Borgias, of bread and circuses, debauchery and corruption.” The article was entitled “Silvio, it’s time to go”, and subtitled “Italy can no longer afford the antics of its playboy in chief.”

Categories
Member StatesPolitics and democracySocietyThe media and freedom of information