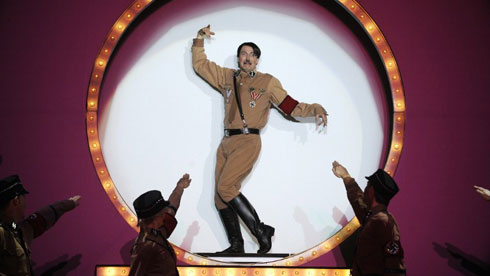 Released in the autumn of 2012, ahead of the 80th anniversary of Adolf Hitler’s coming to power, "Er ist wieder da" ("He’s Back") by German writer Timur Vermes starts off with the dictator’s return to Berlin in the summer of 2011. The book has soared to the top of the book sales charts, but it has also set some teeth on edge.

August 30, 2011. An old man wakes up on waste ground in Berlin. Lying on the ground, he sees only the blue sky above, and is shocked to hear birds singing – a sign that there has been at least a lull in the fighting. He has a headache, and does not understand where he is or how he could have got there.

“What did I do yesterday?” he wonders. Can my amnesia be explained by alcohol? No! The Führer does not drink! In vain he looks around for the faithful Bormann. Getting shakily to his feet, he heads towards the voices of three boys of the Hitler Youth – on leave, no doubt, as they’re not wearing their uniforms and they’re playing football. “Hey, guys. Look over there! Who’s that old guy?” The Führer thinks: “I must really seem to be in a bad way,” noting the absence of the mandatory salute. “Where’s Bormann?” he asks. “Who’s that?” reply the boys. “Bormann! Martin Bormann!” The youngsters look puzzled. “Don’t know him. Who does he look like?” The Führer scowls before snapping: “He looks like a leader of the Reich, Donnerwetter!” The three boys are wearing coloured jerseys. “Hitler Youth Ronaldo!” he says. “Where is the nearest street?” No reaction. He turns to the youngest of the three, who points the way.

At a newsstand at the corner, Hitler looks for the good old Völkischer Beobachter. He sees only Turkish titles … “Strange – the Turk stayed outside of the conflict, despite our many attempts to rally him to our cause.” When he reads the date – August 30, 2011, on a newspaper he has never heard of – he faints. The owner of the kiosk thinks he’s dealing with an actor who just stepped out of a television series. Hitler can stay a few days with him. “But you won’t pinch anything, huh?” Hitler is outraged. “What, do I look like a criminal? “You look like Hitler,” says the newspaper vendor. “Exactly!” the Führer replies.

Soon working as a newsagent himself, the former dictator is “discovered” by a television production company. Producers see “huge potential” in him. He’s hired… The show is a stunning success. Thrown into confusion, Hitler enters a society where success is measured in terms of audience, in “likes” picked up on Facebook. He becomes a well-known comic actor. “You’re worth gold, my dear man!” his producer congratulates him. “This is just the beginning, trust me!”

“This book is so funny that you can’t put it down,” enthuses Peter Hetzel, book critic for the Sat 1 television channel. In fact, the novel, its white cover adorned with just the famous lock of black hair – the title occupies the place of the moustache – has been an unexpected success despite its steep price (€19.33, a reference to the year Hitler came to power) and length (396 pages, written in the first-person singular, a good chunk of it made up of the Führer’s personal reflections in the dry and obscure style of Mein Kampf). “The Hitler of Vermes comes up against a society that considers laughing at him as a sign that, after a very long time, it has faced up to its own past. But it is also a society that has understood that it is not necessary to get rid of the past,” writes the Süddeutsche Zeitung daily. “We laugh, but it’s a laugh that catches a little in the throat.”

With 360,000 copies printed and released in the autumn of 2012, Er ist wieder da has topped the sales charts for weeks. The novel – there is a very good audio version of it, read by Christoph Maria Herbst – will be published in French, English and 15 other languages, and the press is already speculating about a film script to come. Admittedly, this is not the first time that the incarnation of evil has been recycled by comedians and artists. Charlie Chaplin ridiculed Hitler in The Great Dictator in 1940. And in 2007 came the hit comedy Mein Führer, by German filmmaker Dani Levy.

Not everyone is a fan

The debut novel of journalist Timur Vermes has, however, set many teeth on edge in Germany. Daniel Erk, author of So viel Hitler war selten (“Rarely has there been so much of Hitler”), a book criticising the “banalisation of evil” is worried about the growing number of comedies about the Third Reich. “Why wonder about the deep anti-Semitism of German society, still today, if a madman is pushed forward as the only one responsible?” he asks. “This is a good chance for the Germans to clear themselves of any fault and of all responsibility. All the blame for the war and genocide falls squarely on Hitler.”

For Timur Vermes, the same arguments justify his novel. In Er ist wieder da, he describes a Hitler who is scared, worried that a public that does not fear him will resist him. “We don’t have too much Hitler,” Timur Vermes says. “We have too much of a stereotype of Hitler, and it’s always the same: the monster who lets us reassure ourselves that we’re different. Me too, for a long time – I accepted this view of Hitler. But this view isn’t enough. Hitler exercised a real fascination. If so many people helped him to commit crimes, it’s because they liked it. People don’t elect a madman. They elect someone who attracts them or whom they find admirable. To present him as a monster makes his voters into idiots. And that reassures us. People say we’re smarter these days: we would never elect a monster, or a clown. But people back then were just as smart as we are today. That’s what’s painful … If a new Hitler came back, people like to say, it would be easy to handle him. I tried to show that, on the contrary, Hitler would have a chance to succeed even now. Just in a different way.”

Vermes’s novel shows how, in Germany in the 21st Century, a demagogue would still have his chance. The masses can still be conquered, but the methods have changed: they have become more modern. The intent, though, remains the same. “Vermes holds up a mirror to German society which, despite the laughter, throws an unflattering picture back at it,” concludes the literary critic of the N-TV television station. Perhaps that’s the key to its success.

“A strange fixation on Hitler”

The Süddeutsche Zeitung believes that the success of Er ist wieder da (He’s Back) cannot be explained by its literary quality – “it has nothing to fear from Mein Kampf” – but by its fine observation. It points to the consensus prevailing in German society, which laughs at Hitler as a sign of its own enlightenment, saying it is that “a laugh that sticks in the throat, accompanied by a slight shudder and even a small sense of guilt” and is recognised as the “most difficult, most complex, most profound”. The newspaper continues –

The huge audiences [drawn in by the television star Hitler] are clearly grounded in the same reasons the novel has been selling so well. A very strange fixation on Hitler has developed Germany, and it has something of the manic about it.

With faultless regularity Hitler pops up on magazines front pages; he haunts the TV with an insistence that makes it almost impossible for us to zap onto the next channel before we see him shoot up his arm; and, in company with friends, nothing beats a little parody of the “Führrerrr” with two fingers pressed under the nose to ensure hysterical bursts of hilarity – not greatly hysterical, but rather long. This focus on Hitler – whether on the comic figure or the man as the embodiment of evil – risks washing out the historical reality.