After the UK elections 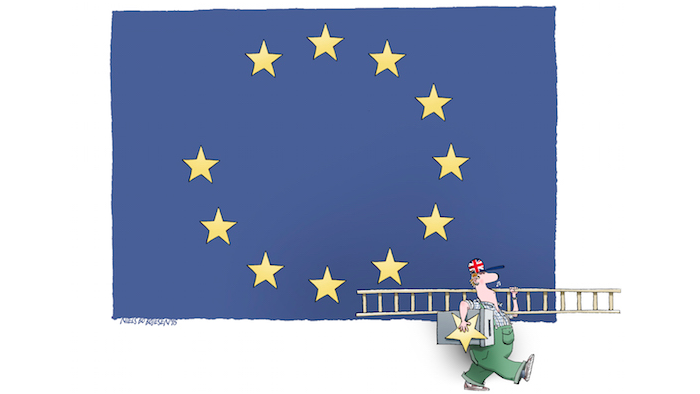 After the UK elections

“Brexit” would put Europe at stake

Following crises in the Mediterranean and Ukraine, “another glaring existential problem” has now emerged in Europe’s western front, writes Natalie Nougayrède in The Guardian. The success of the Conservative Party in the UK's general election last week poses serious questions for the European Union.

British Prime Minister David Cameron, newly re-elected with a slim majority, is largely responsible for whether the UK can stay united and within the EU, Nougayrède argues.

Cameron has promised a renegotiation of the UK’s EU membership, but risks disappointing Eurosceptics in the build-up to a nation-wide referendum on the matter—

Nobody – in Berlin, Paris or anywhere else – wants to embark on a painful process of changing EU treaties. That is rightly seen as a high-risk game for the whole European edifice.

Cameron’s electoral success is proof that he has weathered the storm of economic crisis better than almost any other European leader. He now stands with Angela Merkel as one of “a handful of political survivors” in the EU, a position that should give him considerable political capital. In spite of this, Cameron has pandered to populist demands to curb the free movement of people, "one of the pillars of the EU", which has damaged his credibility on the European stage.

European policy makers are unsure about how all this will pan out. It is unclear how UKIP, a rabidly eurosceptic party, will influence Cameron's stance. And the
Eurosceptics within his own party are an equally unknown quantity. More pressingly—

[Britain's] allies are puzzled as to how the country will be able to rediscover the advantages of being part of a larger European endeavour, and reclaim a role for itself within that club.

Nougayrède cautions against the gung-ho attitude to the European Union so often displayed during the election campaign, for “there is much at stake and much to lose” if Britain were to leave the Union. There is the very real risk of a Scottish secession. And an EU without Britain would lose a key economic and political partner.

If Europe loses Britain, it runs the risk of self-destruction. And if Britain drops out of the EU, it will have to navigate uncharted waters, and risk becoming a small, insignificant player in a globalised world.

Britain’s political class, and Cameron in particular, must ensure that the domestic debate around EU membership happens in a constructive and informed manner without the scare-mongering and jingoism that has come to dominate British politics. The stakes, Nougayrède concludes, could not be higher.