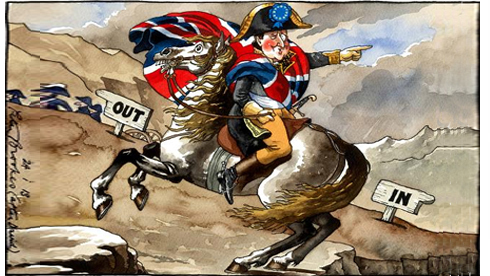 The British Prime Minister's speech on January 23 on the future of relations between his country and the EU has made the front pages of most European newspapers. The idea of a UK exit provokes reactions ranging from outrage to - more frequently - understanding.

There are also many newspapers that, like much of the British press, recognise that Cameron has raised legitimate questions that deserve answers at both the national and European levels.

In Paris, Les Echos believes that the speech outside the Bloomberg offices is a “dangerous gamble”. The economic daily does not hold back from comparing the PM to one of his predecessors.

Like Margaret Thatcher in her time, David Cameron is not concerned with the common interest of building an economically powerful - and necessarily politically powerful - Europe. His vision is of an à la carte Europe where you can be a member without having to accept all the constraints, without having to be in the eurozone or even in the Schengen area. However, if the euro crisis and the Greek bailout have been good for anything, it has been to show the need for a tighter integration of the European countries, notably in budgetary, fiscal and financial matters. At least among the 17 countries of the eurozone. This is clearly not David Cameron's goal.

In Germany, Die Welt believes that “Cameron has put his finger on EU's sore spot,” and, like the overwhelming majority of German commentators, finds the British Prime Minister's questions quite legitimate and even “liberating”.

Cameron is far from being alone with his analysis of the changes facing the EU and that cannot be answered with a simple 'Keep steering straight ahead'. [...] That the British Prime Minister tabled [a question regarding stabilising the eurozone by deepening EU integration] is not anti-European. It is no more anti-European of Cameron than his referring to the crisis of competitiveness afflicting the Union, which he blames partly on sclerotic management of the EU - this flood of rules and guidelines that are paralysing so many creative forces, and not just in the economy. And it's in no way anti-European to mention the creeping democratic deficit and the lack of citizens' confidence in the EU and its institutions. [...] The UK is following a “more practical than emotional” approach, it adds. That might be good for all of us.

“UK does not dream of some cosy, isolated existence on the fringes of Europe”, writes Gazeta Wyborcza commentator Tomasz Bielecki, recalling Margaret Thatcher's 1988 EU address. He notes that for Cameron, who, like Thatcher, is a strong critic of the EU, but at the same time an ardent proponent of the UK's continued membership in the European Community, a Brexit would be a fatal occupational accident, as it

would be a powerful blow against the union of 27 countries, and the eurozone would become the only centre of true integration surrounded by EU peripheries. For us [Poles] it is definitely much more dangerous than for the British. The Polish zloty is not the British pound, and the British Isles are not Poland with its not always easy neighbours. David Cameron's game should prompt us again to press ahead with concrete plans to enter the eurozone.

In Stockholm, Svenska Dagbladet writes that Cameron is not the only one in Europe to express the idea that “accession to the EU should not be equivalent of buying a ticket for a ghost train that doesn't stop at any station and keeps heading towards an unknown destination.” Reactions to his speech were expected, the newspaper said: “Throughout Europe, we hear that the EU is not a buffet where everyone is free to choose whatever he wants.” “Is there really only one possible way?” asks the Svenska Dagbladet –

Given by the how the EU works today, the answer is clearly no: Sweden is not in the eurozone. The UK is not part of the Schengen area and there are plenty of other examples. [...] The alternative for the British is to confront a wildly overgrown EU with the following questions: 'How? Why? To what end? Towards what destination?' These are questions that should be in the interests of all the member states and in the interests of the Union itself.

On the same wavelength, România liberă believes that the “flexible, adaptable and open” Union proposed by Cameron is a very serious enticement. The Bucharest daily notes that –

For the first time, a European leader has come forward with a vision of the EU that steps away from deeper political integration; a more modest but more liberal vision, and one more focused on the free market. So far, Romania has opted for the United States of Europe and the German model of the European Union. Now that there is another vision, our political leaders may soon perhaps engage in a real debate on the European model most advantageous for a country like ours - because the other countries of Europe will be sure to do so.

“Cameron is casting a shadow over the EU,” laments De Volkskrant for its part. The daily from Amsterdam, the city where the Prime Minister was initially to give his speech, nevertheless believes that the EU should take the project seriously if it wants to ensure its survival.

It will be tough to respond to the demands of Cameron without harming the European Union's structure. When one member state wishes to back out of some agreements, there will undoubtedly be other countries that want exceptions too. But a UK exit is not in the interest of the EU - and especially not in the interests of the Netherlands. This is why the European Commission and the other member states should take the British proposals seriously. In addition, the British initiative is giving Brussels food for thought: it would be foolish to rush ahead with integration projects if these endanger the unity of the European Union.

In Madrid, Lluis Bassets writes in El País that “Britain's view of Europe” looks more like a “mere free trade area.” The editor believes that –

For the Prime Minister, the EU is a mere tool, not a goal. Either the EU turns into something that the sceptics are willing to tolerate, or there will be no other choice but to leave. The cheekiness of the blackmail is notable [...] The Conservative dream is to have relations with a globalised world without going through the EU, and to use the EU as a single free trade area that has been as deregulated as possible. This is an idea that, on paper, might look attractive, but in reality faces a host of challenges. The most important is the difficulty of European countries, including the United Kingdom, to get by alone in a global world as if they were emerging powers and not old, former powers of Europe. Washington and Beijing lay the blame straightforwardly on Cameron: they prefer to deal with London through a strong EU.”