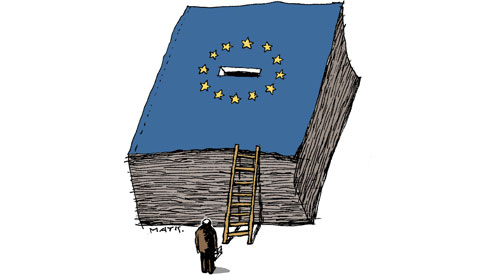 The European elections slated for 2014 will be a departure from the past procedure, and that has awoken high hopes among the public. The most crucial aspiration among Europe’s citizens is the fostering of a true trans-national debate.

The question of the distribution of seats in the new parliament, ahead of elections due in June 2014, is a result of both a provision of the Lisbon Treaty – which foresees reducing the total number of seats from 754 to 751 – and to Croatia’s accession to the EU. The other member states are being invited to make room for the 11 Croatian MEPs, and the only way to do this is to retire their seats. Is this redistribution political, or is it a purely mathematical calculation?

Arithmetic and fairness are two different things. In the jargon of Brussels bureaucrats, fairness is called "degressive proportionality", which means that small countries get more parliamentary seats in proportion to their population, than large countries do.

The Draft of the Constitutional Affairs Committee, on which the European Parliament will vote in mid-March, retires three seats in Germany and one seat in each in 12 other countries, leaving untouched the other 15 countries’ seats. The fact that Germany, which has a dominant position within the EU, is seeing its influence in parliament recede may suggest the choice is a political one. The truth, though, is simpler: the Lisbon Treaty stipulates that no country can have more than 96 seats. Germany – which has 99 – has been an anomaly.

None of the other major EU countries – France, Britain, Italy, Spain and Poland – will be giving up any seats in the parliament. It is the smaller countries that are losing them, which does seem to be a breach of the "degressive proportionality” principle. Finland, which gets to hold onto its 13 seats, can count itself lucky.

Some find it futile perhaps to dwell on the number of parliamentary seats handed out to member states. But it’s an important issue. Parliament is the only EU body that is elected by the people, its influence is growing, and the election of 2014 will be more crucial than ever.

True, the European elections have never really excited citizens in any country – especially young people – and only one in five seem to care who will represent the country.

Opinion polls show that the majority of citizens in the 27 member states still believe that their voice is not heard at the European level. Knowledge of the EU is flawed in all the countries, but most people still believe that Parliament is the institution that best represents the Union – which has something to with the fact they can choose who goes to Parliament.

For the first time, the president of the European Commission will be appointed based on the election results. This, along with the fact that it may be possible in the future to vote for deputies appearing on joint European lists, should encourage the emergence of a European-wide debate on the future direction of EU policy.

Till now, there has been no debate among the various party groupings in the Parliament in the run-up to the European elections, even though they may hold radically different views on the direction in which the Union should be steered. The members vote more often depending on their political affiliation, rather than their nationality.

A more ambitious proposal is to choose all the commissioners from among the MEPs, to give them greater democratic legitimacy. The relationships between the Commission and the Parliament, however, are not comparable to those that can be maintained between the government and the parliament within a nation-state.

A direct link would make the Commission a European government, bringing the Union that much closer to a more federal EU state. At the moment, however, the political will for strengthening federalism is still timid.