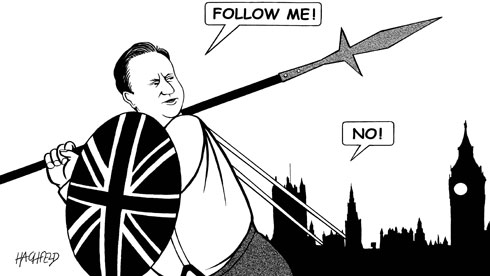 Parliament’s rejection of a vote calling for military action against Bashar al-Assad represents a U-turn in Britain’s tradition of standing up to dictators and a disaster for the Syrian people. Now, it falls to the US to act or jeopardise its credibility, with France as it sole European ally.

Parliament had the luxury yesterday of debating at length the quality of the evidence of Syria’s use of chemical weapons and the legality of responding with force. It was better to have the debate than to scrap it, because no military intervention should be undertaken lightly.

The only crumb of comfort is that the vote will not have stopped western action altogether. The truth that few speakers were ready to acknowledge is that no vote in the Commons will determine when, or if, the regime of President [Bashar] Assad falls and the suffering of the Syrian people stops. The only western government with a potentially decisive role in this crisis is that of the United States.

When the uprising against Assad began it was possible to argue that the US had no compelling strategic interest in its outcome. That situation ended when Mr Obama described the use of chemical weapons as a red line that would change American calculations. That line has been crossed and crossed again.

In an exclusive interview with Le Monde, François Hollande discusses the possibility of strikes on Syria in the wake of the British parliament’s refusal to endorse military action. The French president, who acknowledges the House of Commons vote, argues that an international coalition may still be formed “if the Security Council is prevented from taking action” —

[The coalition] will have the support of European states. However, only a few countries have the capacity to take action using the appropriate means. France is one such country, and France is ready. Its position will be decided in close consultation with its allies.

In particular, François Hollande insists on the fact that the overthrow of Bashar al-Assad’s regime would not be the goal of strikes on Syria —

I am not in favour of international intervention that aims to overthrow the dictator or "liberate" Syria, but I believe that a blow should be struck against a regime that commits irreparable crimes against its population.