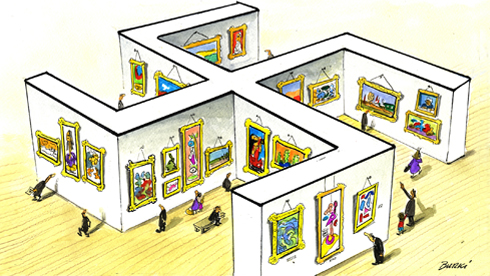 Colours of a painful past

The 1,400 paintings snatched away from their owners by the Nazis and found in the Munich flat of Cornelius Gurlitt are not only a great artistic discovery. The story of the son of an art collector during the Nazi era is once again raising the question of Germany's relationship to its past.

The incredible story of the 1,400 paintings stolen by the Nazis found in the flat of Cornelius Gurlitt, son of a Nazi-era art dealer, has become a true affair of state. It touches on the question of whether Germany has done everything to review and atone for the darkest chapter in its history.

Finally they tracked him down, currently the most sought-after old man in the country. Paris Match photographed him in a Schwabing shopping centre, his hair clean and white and blow-dried, his clothes neat. His gaze wandered uncertainly to the side and his mouth hung half open, as if he wanted to say something, but no words would come.

So this is – apparently – Cornelius Gurlitt, son of the Nazi-era art dealer Hildebrand Gurlitt. His Munich apartment, crammed with works collected largely in the Nazi era, had already been cleared out by the police in 2012 – but that came to light only a week ago in an article by Focus magazine. The public prosecutor's office is not out looking for Gurlitt because it still has no idea what, if any, charges can be brought against him. Others have been searching since last Monday: journalists, photographers, museum staff, and private investigators, on behalf of the heirs of Jewish collectors.

This story is actually quite a big one: at its core is the darkest chapter of German history, hidden behind the lowered blinds of a modern apartment building. A solitary man hoards the inheritance from his father. Hildebrand had cooperated with the Nazi regime and benefited from it; [[he relieved Jewish collectors of their wealth, and thus their middle-class existence]], and he had deprived museums of their showpieces of modernity. At the same time, he himself was not only part Jewish, but also a promoter and advocate of that very same avant-garde culture, whose works he in part preserved and in part sold.

So far, so fatal

These are the contradictions of our shared history, and not everyone born after the war tolerates them well. Cornelius Gurlitt apparently saw no other way open to him but to entrench himself behind his family secret. After the death of his mother in the late 1960s, he could have handed the paternal estate over to a foundation, or left it to the state for research and restitution.

However, he did not have this inner freedom, this distance from his ancestry, and today it’s an open question as to whether he will ever obtain them, being as he is, the hunted one. Even today the only happy solution would be to come an agreement with Gurlitt, because, following the war, the legislation on art theft was never repealed. The law on 'degenerate art' from 1938 remains in force. In the Federal Republic, the established legal opinion holds that the looting of the museums was a “sovereign act”, which is why no gallery was able to reclaim anything after the war. And private collectors, like the Gurlitt family, are also excluded from all later agreements on art looted from Jewish owners.

So far, so fatal. These monstrous abuses are well known, and in recent years there have been cases that have been more legally contentious. Why has the story of the Gurlitts taken on this tremendous momentum just now?

The weird appeal of the family lies in the double secret: the game of hide-and-seek, first played by Cornelius Gurlitt, and now played by the prosecutors, who have yet to publish a full list of the art works.

Cornelius Gurlitt, soon to turn 80, may have thought that while the behaviour of his parents may have been legal, it was hardly legitimate. He devoted his own existence to covering up the lie of his family, took on no profession, started no family, but dedicated himself to preserving the reputation of his father.

The son of the elder Gurlitt may merely be a crank, one of many; in all the talk centred on him over the last week his shyness in front of the camera has led many to label him a half-insane monster, capable of anything. And yet [[all that talk is about a man who is so unable to defend himself that he has not even hired a lawyer]]. Apparently the old man hiding away in his cave stacked with canvases had to be promptly declared an Outsider. There was little compassion for him; the rest of society considered it far more important to protect themselves: we, the others, are healthy – healed of the Nazi crimes and their consequences. Honestly?

Neither perpetrator nor a victim

As Gurlitt was born in Germany in 1933, he was, generally speaking, neither a perpetrator nor a victim. He grew into a system of institutionalised criminality, got over another hurdle yet again as a child when values changed in 1945, and then was counted among the builders of the new Republic. Only now, as this generation enters a ripe old age, is its awareness of the life around it is getting a little shaky and the old fractures are tearing open. One can also see Gurlitt’s history that way: as a chance to learn more and perhaps persuade this son of Germany to talk – and if not him, then his carefully shrouded paintings, graphics and documents.

The Federal Government has now declared it will provide for more transparency and post a list online, so far as that is legally possible. A wise step. It’s not knowing what works are among those uncovered that is so hard on the nerves of the public. The double secret of the find is causing a stir, because all suspect that in a community with such brutal origins misgivings may slumber: ghosts from the past, which we do not really know or can catch hold of, but that can come back to haunt us at any time. Even when all those who were as tangled in the web of opportunism and pitilessness as Hildebrand Gurlitt have died, it will not be over.

Artistic works live longer than humans; they are our memories. With this find, the gloomy feeling that many Germans have is taking shape: suddenly, real pictures from the house of a real heir to the Nazis are among us. We can demonise the messenger of the past for his very existence and so, once again, offload the matter of guilt onto someone else. But we can also declare Cornelius Gurlitt, in his helplessness, to be one of us. Now would be the time to find a way, together with him, to make things better.

It was the weekly Focus that first revealed the fabulous collection of paintings hidden by Cornelius Gurlitt, 80, the son of an art collector who had seized the works deemed "degenerate" by the Nazi regime.

This "hidden treasure" includes more than 1,400 paintings held in Gurlitt's Munich apartment and found by the police in 2012. Among them, are works by Matisse and Picasso, with the total value of the haul estimated at almost €1bn. Some are pieces that have even belonged to Paul Rosenberg, a Parisian art collector and grandfather of journalist Anne Sinclair, who has "been fighting for decades to recover paintings stolen by the Nazis," adds the magazine.