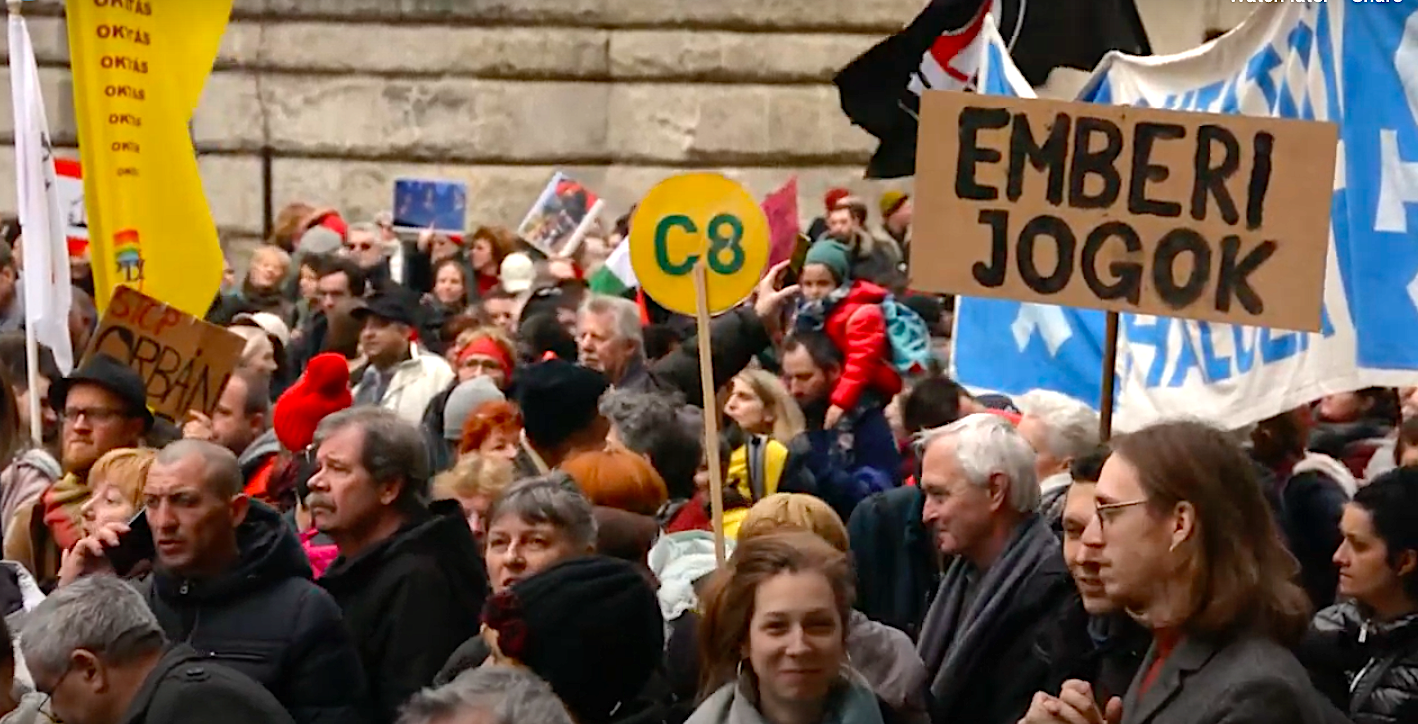 A protracted crisis of human dignity

The greatest casualty of the coronavirus crisis in Hungary has been human dignity, writes Anna Lengyel. And as long as the Orbán system remains in place, this crisis will prevail long after the virus is gone.

"Human rights", says the board displayed during a demonstration against anti-Roma discrimination. Budapest, 23 February 2020.

The last major street protest before the first lockdown measures were introduced in Hungary took place on 23 February ("Human rights", says the board in the photo taken during the demonstration). It was a manifestation for justice and against discrimination, but above all it was about human dignity. In the following months, spent in the shadow of the Covid-19 pandemic, that dignity turned out to be the cheapest of all commodities in Viktor Orbán's emergency playbook.

In September 2019, the Debrecen Appeals Court had ruled that the ongoing ethnic segregation of Roma children in rural Gyöngyöspata violated their right to equal treatment and deprived them of the education guaranteed in the constitution. According to the landmark ruling, 60 children were awarded damages in the amount of 99 million forints (284,033 euros). Prime minister Orbán was quick to show his irritation over the ruling: "If I were from Gyöngyöspata, I'd ask why members of a dominant ethnic group living in the same community as I do should get a significant amount of money without having worked for it, while I'm toiling away all day?" he said.

On the eve of Hungary switching to lockdown mode, this assertion by the prime minister drove people onto the streets, protesting. The subsequent Covid-19 pandemic has shown that even in an economic crisis of historical dimensions the Hungarian prime minister diverts taxpayers' money to fund new football stadiums and to bail out the companies of family members and cronies rather than help pensioners – many of whom get less than the equivalent of 200 euros a month – amid rising prices. As for other types of aid, he has reiterated his conviction that no one should get paid without work. In the past three months the government has offered little or no help to small entrepreneurs, people working in the hotel or catering industries, theatre-makers or other cultural workers.

The first two cases of the novel coronavirus in Hungary were established on 4 March. Orbán himself announced the news on his Facebook-page. He made it clear from the outset that he had no respect for experts, that decisions will be made by him alone and it was obvious that he would now use the pandemic as an excuse to further concentrate power.

One of the most important tools in overcoming an epidemic is access to unbiased, up-to-date information provided by experts. In Hungary, crucial information has been withheld and distorted from day one. At first, there was almost no information on the victims. Responding to the public outcry, the government then published a list in such a manner that one could easily identify the dead and their sensitive medical information. This meant, for example, that only 24 hours after the death of the 37-year-old deputy British ambassador to Hungary, the whole world knew that he was an alcoholic. Allegedly.

Soon an official rhetoric about the fatalities was established: "elderly patients, suffering from chronic illnesses". To this day, listening to the news you will get the impression that in Hungary nobody dies of Covid-19, unless they are old as dirt and terminally ill to begin with. In some cases, relatives have refuted the alleged illnesses and there is no way to verify how much of the information is valid, since hospitals are forbidden to give out any data.

Despite 20 percent of the Hungarian press still being relatively free, we have very little information beyond what the so-called Operative Team tells us. However, some things we do know reveal a story about governmental failure. Such as the hundreds of ventilators delivered to numerous ICUs. These machines were designed for home use for people with sleep disorders and would, in fact, endanger the lives of Covid patients, even if the user's guide wasn't available in Chinese only. Thankfully, in a healthcare system that was on the verge of collapse even before the pandemic, Hungarian hospitals are still full of highly competent and conscientious healthcare workers, so in the end no one used these ventilators.

Orbán, however, only seems to understand a chain of command where his subordinates follow him blindly. When Miklós Kásler, an oncology professor, was appointed to run a ministry responsible for culture, education, sports, social and employment policies and healthcare, it soon became clear that the man lacked competence in all the other areas covered by his portfolio. But the real shock came with his statements about his own field of expertise, for example that "70 to 80 percent of mortal diseases could be avoided by abiding by the Ten Commandments".

But what makes him an ideal choice for this government is his readiness to follow orders blindly – so when he was told to, Kásler did not hesitate to issue a directive that 60 percent of all hospital beds, a total of 36,000, be made immediately available in preparation for a potential outbreak of the coronavirus comparable in size to that in Italy.

Experts quickly explained that no possible scenario would require more than 10,000 beds, but all for deaf ears. So, over Easter, people in need of round-the-clock medical attention – patients on palliative care, a man with freshly amputated legs and countless others – were given 24 hours to vacate their hospital beds. A nurse volunteered for the home care of ten of the worst cases pro bono. After two weeks, she reported that nine of them were dead. A respected hospital director refused to follow the order and was promptly fired along with another outstanding manager sacked over a bogus charge. All of this at the height of the Covid-19 crisis.

Even in a half-dictatorship it was clear that multi-minister Kásler had failed miserably and that he had to go. It even went so far as that his successor's name was common knowledge – until the heir apparent announced that he would rather keep practising medicine. Having no other names to put forward, Orbán has now declared that his Minister of Interior and long-time crony Sándor Pintér is going to review all hospitals and their contracts with non-governmental service-providers. Experts warn that the resulting bureaucratic process will lead to further casualties.

Meanwhile, the infamous emergency law that Orbán forced through parliament in March, giving him unlimited powers to govern by decree, has been used for a series of new laws that have nothing to do with the pandemic, but effectively deprive people of their dignity. Orbán's government has thus rejected the ratification of the Istanbul convention treaty to combat violence against women and has dealt a heavy blow to transgender people by making it illegal to change gender in documents after birth. They have also deprived 20,000 cultural workers in museums, libraries, archives and public cultural institutes of their status as public servants, which leaves them unprotected against dismissal. Yet another "emergency" law will effectively bankrupt Hungary's capital run by the opposition party mayor, Gergely Karácsony.

Healthcare workers, the true heroes of the pandemic, have not been offered any real acknowledgement or meaningful economic compensation. Orbán explained that the first heroes of the pandemic were priests, followed – in this order – by statesmen, policemen and disaster relief workers. Doctors come only fifth. Except for one. The Hungarian prime minister now hails Kásler's merits as "nothing short of historic".

The greatest casualty of the coronavirus crisis in Hungary has been human dignity. And as long as the Orbán system remains in place, this crisis will prevail long after the virus is gone.

This article is part of the Debates Digital project, a series of digitally published content including texts and live discussions by some of the outstanding writers, scholars and public intellectuals who are part of the Debates on Europe network. An online discussion with the authors will take place on 16 June at 7 PM CEST, and will be streamed on YouTube.